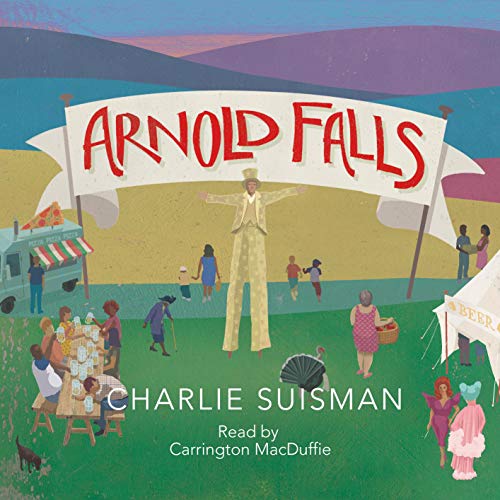 By: Charlie Suisman
Narrated by: Carrington MacDuffie
Free with a 30-day trial
Buy for $19.95

Spend time in the funny, oddball village of Arnold Falls, where larger-than-life characters deal with the smallest of problems. Somehow, it all comes out right in the end. Arnold Falls is a novel that tips its hat to Armistead Maupin and P. G. Wodehouse, creating a world in which food, music, friendship, love, and tending your own garden are connected in surprising ways.

Given the choice of go big or go home, nine times out of 10 the townspeople of Arnold Falls will go home, get back into their house slippers, and forget about the whole thing, whatever the whole thing was this time. Tempests great and small (mostly small) are always brewing in this tiny, upstate hamlet where half of the residents are fighting to preserve Arnold Falls as it was in its red-light-district heyday, half are up to no good, and another half are sleeping it off. And that math is correct.

Jeebie Walker moved north out of the city hoping to find a house with his then-boyfriend and a quieter life. He found the house but lost the boyfriend, and is still searching for the elusive tranquility. Just now, he's helping a pal become the first female mayor of Arnold Falls; he's fighting against a plan to build a noxious tire factory by the river; and he's working to save Chaplin, a beloved turkey, from Thanksgiving.

What he's not doing, in no uncertain terms, is looking for love. Not even with the handsome orchard worker-slash-volunteer fireman-slash-cartoon artist who has an eye for him. Definitely not. And yet, hapless though it may be, Arnold Falls will have its way when it comes to love. First, Jeebie and the town's unruly cast of characters, (which includes the 93-year-old daughter of a bordello madam, a theatrical agent/recidivist pickpocket, a doltish mayor, a social worker who sings like a dream, and a television chef who does not take kindly to prune clafoutis sabotage) will have to wage epically tiny battles to restore the disorder that makes perfect sense in Arnold Falls.

What listeners say about Arnold Falls

This new novel by Charlie Suisman impressed me with a keen eye for detail and laced with wit. The author conjurs up a place that I think most readers would like to live, and I enjoyed it for that. You are taken through a myriad of different characters and situations, all very nice to listen to. I hope we get to hear more about the fabled land of Arnold Falls.

This is a very pleasant book to listen to. All centered around a rather strange area on the East Coast with all its colorful and sometimes bizarre characters living in it. It took me a while to get into it, which is fine during the Covid period when I have time on my hands. Once embedded in the story, it really grew on me. Recommended.

Strange, often funny, mostly nice book. Quirky is overused, so I’ll say a novel full of unusual characters will a delightful amount of pop culture references. The odd thing was how the “hero” used every dirty, unhanded trick to win her election: collusion with both police and a judge, stealing property (the turkey), starting libel and rumors (chlamydia). The only cartoonish character in the book is the losing candidate, who (of course) is stupid, corrupt, assisting terrorists, and a chauvinist. But still, a nice read if you can get past all the illegal shenanigans.

This was a different kind of listen for me. The book is written in first person for the main character, or at least what I assume is the main character and the rest is in third person. The narration was good but it was difficult for me to tell male from female at times. The writing is, for lack of a better word, wordy. It is loaded with references to authors, song writers, musicians singers and other notable people reminding me of person that name drops to make themselves seem important. The story line flows like the tale one's eccentric great aunt tells every holiday about her recent harrowing shopping trip which meanders around and includes the neighbors noisy dog and that time her sister borrowed her favorite pink sweater when she was fourteen. It was a bit difficult to figure out what was the main plot and what were just side adventures. It seems to cover anything and everything that is happening in the town. The book was like this review, a lot of different thoughts strung together into one long convoluted paragraph. I stopped listening after four hours, It may have all come together in the last half of the book if I had just trudged on. It really wasn't my cup of tea but others may find it absolutely fascinating. This book was given to me for free by the Author, narrator or publisher in exchange for an honest review.