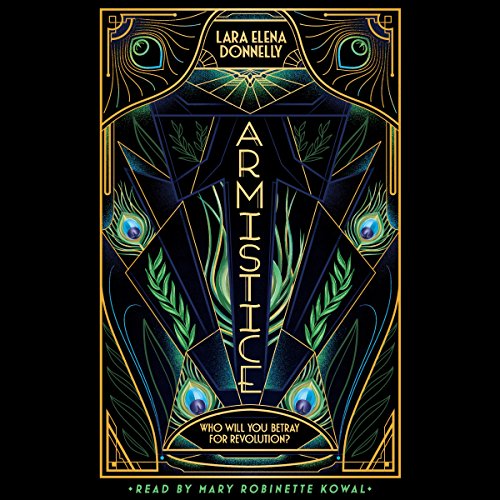 In a tropical country where shadowy political affairs lurk behind the scenes of its glamorous film industry, three people maneuver inside a high-stakes game of statecraft and espionage: Lillian, a reluctant diplomat serving a fascist nation; Aristide, an expatriate film director running from lost love and a criminal past; and Cordelia, a former cabaret stripper turned legendary revolutionary.

Each one harbors dangerous knowledge that can upturn a nation. When their fates collide, machinations are put into play, unexpected alliances are built, and long-held secrets are exposed. All is barreling towards an international revolt...and only the wiliest ones will be prepared for what comes next.

“Bracing [and] timely...Donnelly has successfully built upon her intricate, lush world of passionate spies and turncoats, and each character leaps off the page in this satisfying novel that succeeds on both grand and intimate scales.” (Publishers Weekly)

What listeners say about Armistice

I thoroughly enjoyed the second book in the series. I think I might have liked it more than Amberlough. Perhaps that is because much of the structure of the book is more traditional. I don't mean it as a criticism. I found the story beats to be more predictable. There is always that rewarding moment of "A-ha! I knew it!" when you were able to see the twists coming. Amberlough was a frustrating experience as it was no in my usual wheelhouse and I found it hard to know where it was heading story-wise.
In Armistice, the new characters and locations expand the world of Amberlough. Discovering Porachis was a joy, with its different climate, food, and culture. But it also felt a little too safe, removed from the true horrors of a fascist state of Gedda. The stakes are still high but it lacked the knife's edge danger of being trapped in Amberlough like in the first book.
I also wanted to once again mention the fantastic narration by Mary Robinette Kowal. Amberlough would not have been my kind of book but her narration eventually drew me in. The rich tapestry of voices wove an intricate political thriller that I wanted to return to. In Armistice, she continues her excellent work and I have eagerly queued up the next book. Bravo!

Magnificent story, just what I wanted

What an absolutely marvelous thing. I can not believe how many emotions I felt listening to this.

Mary Robinette Kowal’s performance made this book even better, as impossible as that seems. The various accents added so much to the story, especially when Ari dips in and out of his burr. I was weeping by the end, absolutely gorgeous.