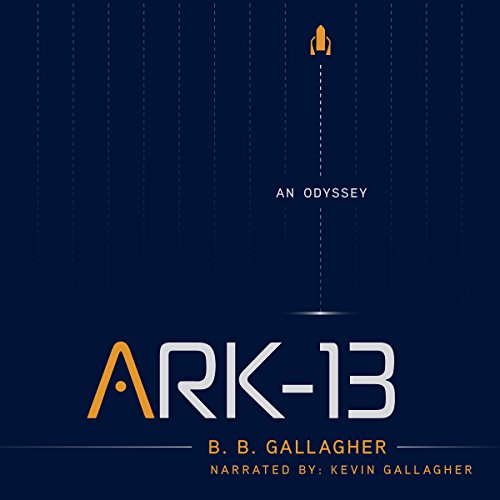 "We, along with the other 12 Arks, flying out to the far reaches of space are now the only remnants left of humanity. We are the chosen few for the world's only life rafts. We are Ark-13 and this is an S.O.S."

With constant intrigue and mystery, Ark-13 can best be described as Lost meets Interstellar. It carries a broad appeal, as the themes of the story center around the human condition, resilience, self-preservation, and technology's clash with nature.

What listeners say about Ark-13: An Odyssey

The description for this book mentions that "Ark-13 can best be described as Lost meets Interstellar". This is setting the expectations mark fairly high (at least in my opinion), something that I don't feel the book reached. I can see the Lost references to an extent, as the book has a mysterious corporation controlling things with the characters are trying to get answers from and is told both with the present and with flashbacks. But that's where the similarities end - there is no supernatural weirdness etc that is in Lost. This is one main mystery (around Genesis) not the perpetual strangeness and mystery of Lost. Part of that is probably due to length and what can be told in the short space of this book.

As for Interstellar... not so much. Unless you go with the bare minimum of they are in space and Earth is uninhabitable. That's about where the similarities end.

I could think of one very well known movie/book that this story is like, but even saying the name would be giant spoilers. So I won't.

The book follows Jake, who is part of the judicial system on Ark-13. The 13th of 13 arks used to save some of humanity from a destroyed Earth. When evidence appears that the ark controllers, GENESIS, are manipulating people and oppressing the population Jake investigates, while being pulled into a slowly forming rebellion.

The story is interesting and quick paced. The flashbacks - told through journal entries - eventually come to a point but for the majority of the book just serve to slow things and take away from the main story. There is pay off to them, but at least initially they are a drag (as much of a drag as a quick, short book can have - which isn't that much).

The story goes into a bit of discussion on the man/machine divide, with each person on the ark having a cybernetic implant. Are these being used to control people or report false data and thus convict innocent people? This is fairly interesting and weaved throughout the story.

The themes also touches on rule of law and rights of the individual. However with these there is no real discussion about them except that Jake takes the position of each person has right of x, y and z but never really questions where these rights come from. I would have been interested in seeing more of the "bad guys" side, where the opinion is GENESIS is not oppressing people but actually managing resources and looking after people. There is an automatic assumption that Jake's way is correct, that any sort of control is bad (ignoring the fact that GENESIS just saved them, when they didn't have to, and is likely continuing to work to save them) with any presentation of the other side of the argument being framed as "the bad guys".

If you are looking for a fun, sci-fi thriller then this is great.

If you are looking for a story on what it means to be man and what rights we should have etc - which is what I found both the blurb and the other reviews to suggest this book is - then I found it a little lacking in that department.

Narration by Kevin Gallagher is good. Initially I thought I was in for a rough ride, with the first minute or so being pretty monotone, but this is a journal entry and appears to be a conscious choice to speak that way for the section. Once we move off of the journal entry into the story Kevin does well, imparting emotion and energy into the narration. While not exactly having different voices/accents for all different characters Kevin does provide enough differentiation between character voices to make it clear different people are speaking (except, again, during journal entries where all characters are flat). Narration is easy to follow, enjoyable and full of energy.


This audiobook was provided by the author, narrator, or publisher at no cost in exchange for an unbiased review courtesy of audiobookboom dot com.

Post apocalyptic sci fi with a HUGE plot twist. Steve jobs/bill gates like tech company. Giant meteors. Spaceships. The destruction of earth. New society in space. Big brother is always watching. Well written and well read. Enjoyed it thoroughly. I received this audiobook from the author narrator or publisher for free via audiobookblast in exchange for an unbiased review

a really nice story wrapped up in a nice package

Ark-13, the final of Earth's last chance for survival.  There were 13 arks in total, and Jake Hansen is on the final ark.  He has also been given one of the esteemed positions on the ship.  After he does some digging around, he finds more than he expects to.

The narration was done by the author and Kevin Gallagher.  I'm not sure who was who, but one of the narrators was perfect (the one who narrates most of the story).  He was a wonderful storyteller who kept the book moving and used his voice to make the story better.  The other (I honestly don't know who was who, and I don't like making negative comments) narrated some of the journal entries.  They weren't bad, they just lacked some inflection and that "umph" that good books have.  Thankfully, most of the story is narrated by the better of the two narrators.  The production quality was good, and I found no problems.

The story was short and sweet.  Well, not sweet.  The story left me dumbfounded.  I'm still not really sure what to think of the ending. I liked it, but I was totally blindsided by it, and I think that's a good thing.  In an era where everything seems to follow the same script and same a + b + c = a good story -- this story took a nice turn.

The main character, Jake was also and interesting one.  Without much back story (just enough), the reader is able to follow and even root for Jake as he tries to figure out what is going on with the ark and with Genesis.

Overall, Ark 13 was a really nice story wrapped up in a nice package.  I'm a fan of novellas, and ones that can be written and tell a wonderful story will always be rated well by me.  Some people will think that the story was too short or lacked some character development, but I'd disagree.

In the vein of "Lost" the real enemy or obstacle is not that which is right in front of you. This novel is more of a mystery than it appears with all questions answered at the end. The short length of this listen is perfect for the story told.

Would you listen to Ark-13: An Odyssey again? Why?

What about Kevin Gallagher and B.B. Gallagher ’s performance did you like?

This audiobook was provided by the author, narrator, or publisher at no cost in exchange for an unbiased review courtesy of audiobookboom dot com

The earth is about to suffer an extinction level event. The last hope of the human race is a series of Arks, (ships), carrying a chosen few humans who will continue the race. With all that has happened you’d think the survivors would have learned. But then we’d have no story. “Ark-13: An Odyssey,” has a lot packed into a short story. It touches on several themes and offers some nice twists. Although it’s a quick read/listen, it was a satisfying story in spite of my figuring out the end ahead of time. If you like stories that are a bit Sci Fi and a bit Twilight Zone you should love “Ark-13: An Odyssey.”

Finally, this audio book was provided by the author at no cost in exchange for an honest review, courtesy of Audio Book Blast.

Human rights versus blindly following. The reveal not so much.

This book is really a 3.5. I received this audiobook for free through Audiobook Boom for my unbiased review.

Excellent Sci-fi The ending was unexpected

When I first started listening to the narrator, I thought he was bland. Then I realized this is the same way I would read my journal out loud to someone. Then I realized it was the author reading the story....which definately is the way he was reading this journal.

It really picks up after chapter 1. Stuck with no basic human rights, If I were in this position I would be pissed off beyond belief.

I actually like the fact that in this future cancer cannot be cured. Every other futuristic book has cures for cancer and old age. This one has No cure for cancer. This book did not follow the cookie cutter future cures.

This story has been done before in different ways, but each author adds a little to the concepts. It is kind of like how Tolkien created the Orcs and now everyone has Orcs in the fantasy books or x-box games. I appreciate what this story brings to the future epics.

The ending was unexpected. This would make a great CW tv series.

This audiobook was provided by the author at no cost in exchange for an unbiased review courtesy of Audiobook Blast.

What made the experience of listening to Ark-13: An Odyssey the most enjoyable?

I really felt like I was living through the experience as Jake.

The ending suprised me. Not what I was expectingat all.

Have you listened to any of Kevin Gallagher and B.B. Gallagher ’s other performances before? How does this one compare?

Come, take a ride with us.

Excellent story. May I suggest a sequel???

I honestly never did not know where this book was really going until the end. This is one of those wonderful books that really makes you stop and think: What if I could design a society? I highly recommend this book if you love a sci-fi society-building book but make sure you have time to pay attention so you don't miss important parts. The narration was excellent!


This audiobook was given by the author, narrator, or publisher at no cost in exchange for an unbiased review via Audiobook Boom.