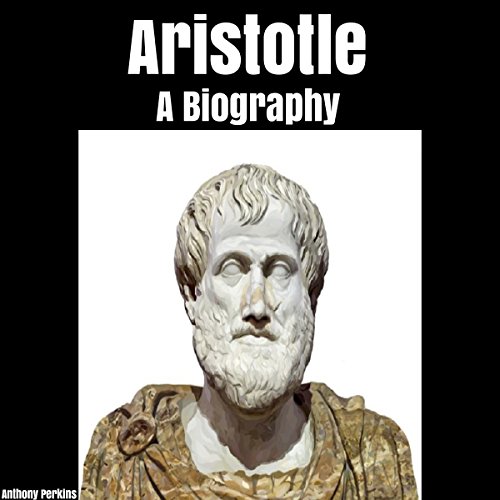 By: Anthony Perkins
Narrated by: Fernando Castillo
Try for $0.00

Aristotle was a Greek philosopher and scientist born in the city of Stagira, Chalkidice, on the northern periphery of Classical Greece. His father, Nicomachus, died when Aristotle was a child, whereafter Proxenus of Atarneus became his guardian. At 17 or 18 years of age, he joined Plato's Academy in Athens and remained there until the age of 37 (c. 347 BC). His writings cover many subjects - including physics, biology, zoology, metaphysics, logic, ethics, aesthetics, poetry, theater, music, rhetoric, linguistics, politics, and government - and constitute the first comprehensive system of Western philosophy. Shortly after Plato died, Aristotle left Athens and, at the request of Philip of Macedon, tutored Alexander the Great beginning in 343 BC.

Teaching Alexander the Great gave Aristotle many opportunities and an abundance of supplies. He established a library in the Lyceum which aided in the production of many of his hundreds of books. The fact that Aristotle was a pupil of Plato contributed to his former views of Platonism, but, following Plato's death, Aristotle immersed himself in empirical studies and shifted from Platonism to empiricism. He believed all peoples' concepts and all of their knowledge was ultimately based on perception. Aristotle's views on natural sciences represent the groundwork underlying many of his works.

Aristotle's views on physical science profoundly shaped medieval scholarship. Their influence extended from Late Antiquity and the Early Middle Ages into the Renaissance, and were not replaced systematically until the Enlightenment and theories such as classical mechanics.

What listeners say about Aristotle: A Biography

Great listen! Educational and thorough. Would definitely recommend this book to anyone wanting to know who Aristotle was and how much of a influence he was.
Loved the narrators voice.

This was my first audio book listen and it was great.The narrator did an amazing job.I would definitely listen to another book by this narrator. i recommend to give this a listen.

I enjoyed learning about Aristotle in this brief but informative boigraphy. The narrator was clear and concise. He has a very theraputic and soothing voice. He made me enjoy the reading.
I will definitely look for other narrations by him.

Yes, I would recommend it to anyone who is interested in Aristotle/ Philosophy.

The narrator had an authentic and engaging tone of voice. I enjoyed listening to this audiobook even though it's not a favorite topic of mine.

If you could sum up Aristotle: A Biography in three words, what would they be?

My favorite character would be Aristotle as I never knew how involved and dedicated he was to his craft in philosophy. His contributions to society and the history of the world are captured perfectly in this work.

Have you listened to any of Fernando Castillo’s other performances before? How does this one compare?

No, this is the first time I have heard Fernando Castillo's narration, but I thought it was well done, clear, and soothing. Fernando did an excellent job narrating the life of Aristotle in a lucid format and enunciated the whole way through. I would listen to another work narrated by him if available.

Yes, I listened to the entire book in one sitting.

I've taken philosophy classes previously in both secondary and undergraduate courses. The summary of the life of Aristotle was captured perfectly in this work and also included facts that were educational and eye-opening. A great read/audio book that captures Aristotle's contributions solidly!