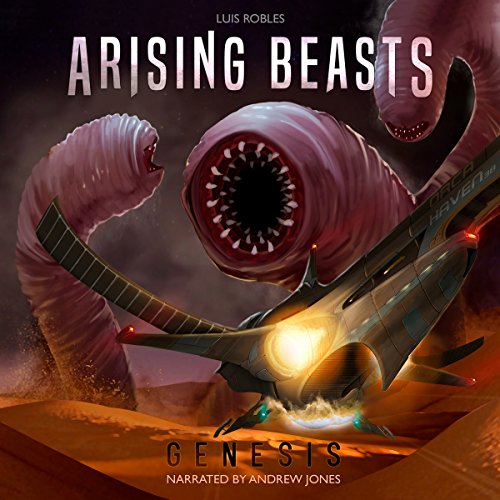 By: Luis Robles
Narrated by: Andrew Jones
Try for $0.00

In the shadow of a long-ago alien invasion, the last of humanity hides away in high-rise bunkers known as Havens. Scattered across the desolate globe, stranded and cut off from life-giving supplies and rations, all that remains of the human race dwindles towards extinction.

Their only option for survival lies on the backs of the brave few willing to venture out into the treacherous desert in search of the legendary War Beasts buried somewhere in the endless sand. They would risk their lives and the lives of those who were left behind in the Havens to give a dying race a second chance.

Between them and the fate of the world lies a vast and dangerous desert - and the behemoth terrors that lurk beneath a sea of sand...

Arising Beasts is the larger-than-life story of humanity's battle for survival on a poisoned planet Earth.

A Battle For Survival

Human colonies are barely hanging on after being driven to the brink of extinction buy Alien forces. A party of five brave soles set out in search of an ancient relic - humanities last hope.

This was a fun adventure - extoling humanities virtues and faults while also adding in a few giant robot battles.

in a desperate, poisonous world humanity is seeking any means of survival. But when it is found will greed and fear snatch it out of their hands. Part Dune, peices of Pacific Rim, with a sprinkle of Hunger Games make up the recipe for this enjoyable Scifi action adventure. I was given a copy of this book in exchange for an honest review.

If you love sci-fi you will love this book...so imagine a space faring group like the aliens from Independence Day attack and take Over earth. The various battles lead to all sorts of destruction on earth massive dessert landscapes with giant worms like in Dune. Humanity’s last best hope a giant humanoid robot piloted and looking like something out of Pacific Rim named Demos. And a cliffhanger of an ending that leaves you awaiting the next installment. What a well written and well narrated piece. I was voluntarily provided this free review copy audiobook by the author, narrator or publisher

While not the most amazing story out there it was still very fun to listen to. "I was given this free review copy audiobook at my request and have voluntarily left this review."

A dangerous world out there.

It was the cover which first attracted my attention, curvaceous muted colours of tubes - or something. Unusual even for science fiction nowadays. And the blurb also was interesting. But the book itself failed to live up to expectations, despite there being potential at various points along the way, for example the post apocalyptic world as seen by the few survivors (only very lightly touched upon), the social and political rivalries within the Haven from which the five valiant explorers set out, even a much better characterisation of the protagonists and their hopes should their mission succeed. Instead, it becomes essentially an adventure romp in the desert, a sort of transformer on Dune.

With no investment in the characters and the fragile information only that life can exist for the humans for a few days if the mission fails, this reader failed to be captivated by the near constant action amidst ever present danger. The book felt flat, two dimensional with added colour, and sometimes annoyingly repititious, as in, 'Three worms entered the room with a show of brute strength. There were three of them.' Or, close to the conclusion in chapter 19, where a whole paragraph repeats what was said only two or three chapters earlier. Petty objections, perhaps, but had writing/editing, and irritating. Narration, on the other hand, was definitely three dimensional, Andrew Jones infusing his reading with emotion according to the vagaries of the text, great intonation, and giving each character an appropriate and very individual voicing.

My thanks to the rights holder of Arising Beasts, who, at my request via Audiobook Boom, freely gifted me with a complimentary copy. I have been a big S.F.fan all of my life and this story seemed to incorporate elements of past, and great, works without bringing the sparkle of originality or the introduction of new heros to urge on in our minds. It was still an enjoyable read but not one that I would recommend to others.

A good but simple story

I recieved a review copy of this book. The story is interesting and well put together, my only issue being the length of the book left little time for anything non-essential for the core story which made the book feel a little short as there were many elements that felt they could have been more developed.

The narration is also good, but the quality suffers a little if you have to turn the volume up high due to slight background noise, but this is only noticable at higher volumes.