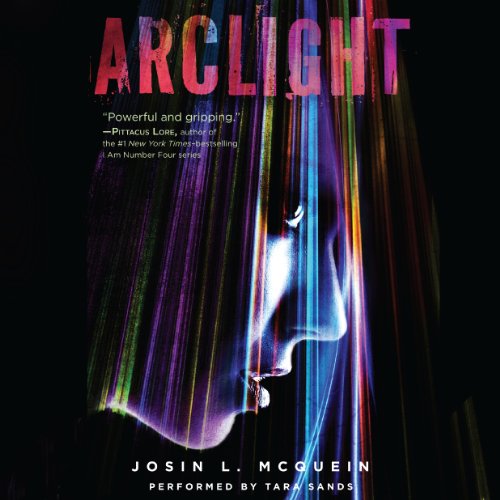 A harrowing sci-fi thriller about a teen who's survived horrors but lost her memory, for fans of Veronica Roth, Stephen King, and Justin Cronin.

Arclight is a bold and astonishing debut about identity, unnerving connections, tortured romance, and the courage we find when we face our worst nightmares.

The Arclight is the last refuge in a postapocalyptic world consumed by terrifying monsters called the Fade. No one crosses the wall of light that keeps the last human survivors safe. There's nothing else left and nowhere to go. Or so they thought, until Marina, a lone teenage girl, stumbles out of the Dark.

Marina doesn't remember who she is, where she came from, or how she survived. And the Fade want her back. When one of them infiltrates the compound and recognizes Marina, she begins to unlock secrets she didn't even know she had. Marina knows she's an outsider in the Arclight, but she'll do anything to protect those who saved her. Whether they want her help or not.

What listeners say about Arclight

I stumbled upon arclight in the audible browse page. Amazon reviews only set it at 3.5 stars and that blew me away!

This is a story about a world lost to darkness. A human colony huddled frightened in the one spot of light left.

It is also a story about empathy. Putting yourself in your enemy's shoes and trying to understand those who are different rather than fear them.

I had a little bit of a hard time wrapping my head around the whole concept.

The moment I saw the cover of Arclight I was really intrigued and could hardly wait to read this one! And I actually ended up really liking it! I had the ARC but I ended up listening to the audio on Audible.

I absolutely love the way this book starts out. You get the feel right from the very start that Marina is kind of the odd-girl-out, and that there is a good reason why everyone looks at her like she’s a bad omen. And right when all this opening craziness happens, we get to meet a bunch of characters that are introduced into this high stress environment…including the main character Marina. Then to top it all off (along with the really cool story/character introductions), we get a feel for what the people in this story are protecting themselves from (The Fade.)

Throughout the story every scene moves smoothly and kept me entertained. There were just a few things that I had troubles with. Once we start to get a feel, or start to see a picture of The Fade, I had a hard time visualizing them in my mind. And then, when we finally do learn a lot more about The Fade, the new information just kept messing with the image that I already created in my head. Hopefully, we will get a clearer picture of The Fade in the following books. My only other problem is that I listened to Arclight pretty much right after I listened to Mila 2.0, and there were a few similarities (not much really) between the two books and the Narrator for both books is the same. I’ve listened to another book read by Tara Sands and she’s a really good Narrator, but I just felt like these two books had a similar feel to them. (Of course, the only reason I may have noticed these similarities is because I listened to both books back-to-back.) Other than those two things, I really liked this book.

The paranormal/dystopian aspect to Arclight is very different from everything else out there and I really liked this aspect of the book. I’m really looking forward to the next book so I can learn more about The Fade.

It was so interesting! Very creative story and I'm sure everyone will be interested in The Fade.

I really loved this book. It was a bit odd at first, but when Marina started to get memories back, all made sense. And was sad. And scary. And shocking. I can't wait for book 2!

started preatty redundant as any distopia than picked up, had its own unique twist and flavor, more than "oh no, bad government, got to overthrow it and rise up"

This story could use a fine tooth comb. There are a lot of gaps, a lot of things that don't make sense and never get explained. It's hard to suspend reality when you don't know wtf is going on half the time. The Fade make no sense. If there was a decent description of them and their abilities I totally missed it and am very confused about what they look like. The first 60% of the book moves so slow I almost stopped listening because I could barely stand it. The last part of the book things actually happen, but at that point I was just finishing the book to say I'd finished it. I will not be reading the second book. I did not enjoy being confused for so much of this book.