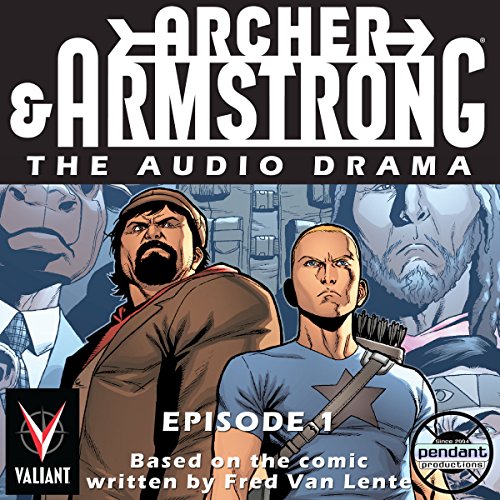 Obadiah Archer was born and raised to cherish three things above all else: the faith of his parents, the love of his 22 brothers and sisters, and his lifelong mission to defeat the ultimate evildoer. Now, after years of training, Archer has been dispatched to the heart of America's festering modern day Babylon, aka New York City, to root out and kill this infamous Great Satan. Unfortunately, dying has never been easy for Archer's target - the hard-drinking, 10,000-year-old immortal known as Armstrong. Together, this unlikely pair of heroes is about to stumble headfirst into a centuries-old conspiracy that will bring the whole of ancient history crashing down on the modern day Valiant Universe. And that's going to mean one hell of a hangover.

What listeners say about Archer & Armstrong #1

Comparing this to other audio books i can definitely say that the quality is top notch! The acting was mostly great (with a few exceptions, mainly side characters).

Hard to choose. Both Archer and Armstrong where great and their voice actors were also very good.

Overall a great deal of fun and a really great adaptation of the comic source!

Top notch drama from the #PendantValiantDreamTeam!

Archer & Armstrong #1 was truly special. Fred Van Lente's story was well written, the adaptation was brilliant with the humor it added, and the audio mix does a really great job of immersing you in the story without any visual cues.

The performances were also great, with Pete Milan's Armstrong, Melissa Autumn Hearne's Mary-Maria, and Jack Calk's Ivar being very faithful to the characters. For me though, the biggest standout was Paul Brueggemann's Obadiah Archer. As a religious person, I fully sympathized with the realization that he's been bamboozled by a dominion theology cult all his life. The pain and betrayal of that makes for a very strong character turn that really has me excited to hear where things go in the next episode.

Overall, this installment was fantastic stuff and I can't wait for more!

I must admit, I had never even heard of Archer & Armstrong before Pendant produced these audio dramas but now I'm hooked. great story. love the fx. and a shout out to Melissa Autumn Hearne in her role as Mary-Maria. Looking forward to next month's release. I've ordered Valiant's Archer & Armstrong Volume 1 so I can follow along.

A fantastic companion to the comic series. The voice actors for Archer and Armstrong nailed it!

What did you love best about Archer & Armstrong #1?

It was interesting to listen to.

Don't have one. Too many people to choose from.

Opening Anna Rodriguez did excellent job with this.

The commentary with explanations of the sound affects.

Archer and Armstrong is A Flipping Good Time

Archer and Armstrong Ranks among The Top 10 of the short audio books I listen To and is currently a Contender for Multiple Rotations in my Queue.

While not as Hilarious as Henderson and Havner. A&A is a fun ride.

It is a surprising supplement to the Comic. and the Behind the scenes segments show how much effort was put into it.

Amateurish voice acting. Dialogue as though it were written by a grade-schooler. Surprisingly poor production quality. A rehash of every bad super hero story you've ever encountered. No redeeming quality.

Hard on it's own.

It was hard to listen to on it's own but when I got out the comic and read while listening it was much better.

As for narrators only the Archer and Armstrong voices were the only one's who put effort in to the act.