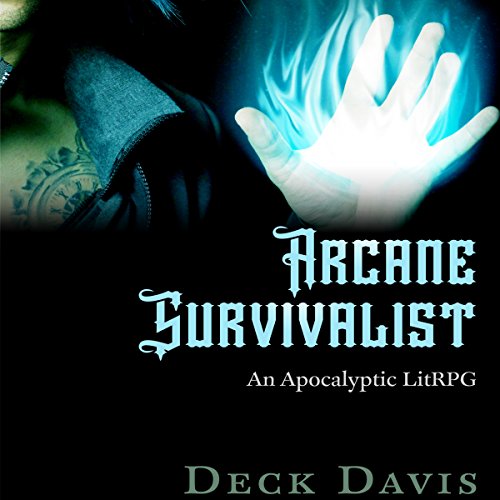 After experimenting with dark matter, Dr. Benny Aitken inadvertently opened a portal into another dimension. He found himself in a world called Rapto, a place where he was given magic powers and killing stuff made him stronger. A dark mage guild soon discovered the portal and found a way to get through it. Dr. Benny Aitken, self-proclaimed genius, had unwittingly visited a fantasy apocalypse upon earth. It's starting point? A small town called Pasture Downs.

In a fit of desperation, Benny sends blue orbs back through the portal in the hope that a few heroic residents of Earth would find them and absorb their powers, granting them magical skills that they can level up by killing things. Who are these heroes of legend to be? Unfortunately, one of them is Ash Hobbes, a conman and self-confessed ass.

After stumbling on an orb he becomes a blood mage. Together with a companion called FF, who lives in his head, Ash must learn to stop being such an ass and find the strength to save the world as a blood mage.

What listeners say about Arcane Survivalist

I have to admit one thing, Deck Davis knows how to craft a title. This one really called out to me. It sounded fierce and awesome. I had high hopes for this book, and I am sad to say that those hopes were dashed on the rocks of dispair by the cliffs of insanity on the sea of drowned discouragement.

The book itself seems like it was written by a 12 year old who just found out that he can swear when his parents aren't around. The neverending d*ck jokes and @ss references put me right off. Seriously, I can enjoy swearing, in fact I love to do it myself, but this was not even cursing to be funny. See Richard Pryor and cursing to understand that swearing can be used judiciously and with humor. Not here. The protagonist names the mental assistant something that rhymes with duck face, but goes by the initials FF. I could not stand it after awhile, and even though I had 55 minutes left, I listened to a 10 hour audio book in its stead just to cleanse my brain. Those last 55 minutes, and I did go back and listen to them were some of the longest in my life.

The plot is decent, otherworldly beings want to merge worlds, and implant their souls into human bodies. Red balls carry alien souls that will over ride human ones, and blue balls (ha ha) were sent in to give humans the ability to fight the invaders. The protagonist becomes a bloodmage, meaning he sacrifices his own blood to cast spells. I know this is supposed to be gamelit, but this book was about as crunchy as a bowl of mush. The MC kept "topping himself of with HP after a fight by draining his foes. There was never a moment where you felt as if he were in danger, there was no tension, and there was no life in this story. Oh, and for some reason Davis made the MC a con man. I think he felt that would make him more of a b-hole than normal. Funny thing is, he is not all that smart, and his con is about as smooth and original as burned pancakes. I just could not stomach the crappy humor or the MC's attitude at all.

Oh, and lord save me, I did not look to see that it was JJ Jeness who narrated. I listened to him before, and was underwhelmed by his capabilities. Had I seen his mane on this book I would have instapassed. The man can speak clearly, and properly pronounce and enunciate words, but his voice is weak and his reading is wooden. The only time he shows any signs of emotion or life is when he is reading as the monsters, and I think he just automatically makes them aggressive sounding instinctively. He drug this book down a lot. Had it had a different narrator it might have been a three star book, but this is audible, and hear your narrator makes or breaks you and JJJ shattered this book before it began.

This review has been a real struggle for me. I always try to focus on positive aspects, and make suggestions for the author to take into consideration if there were any problems. I can't do that here. Sorry. I hate being negative, but I really do not think you want to listen to this book. Maybe read it, but listen? Nope. Skip this and make another choice, cool title aside this book will kill your soul. Even though I did receive a promo code for this review it in no way influenced my considerations of the material, and in fact, inspired me to be more honest. In fact, getting a code generally makes me harsher as a reviewer as I am more often concerned what someone like Me will decide based on my review.

an undeveloped attempt at a poorly articulated idea. with a main character who is supposed to be brilliant yet can't seem to get out of his own way.

horrible narrator , he reads in sentence fragments like a 5th grader. on top of that, it seems the author added in extra profanity and crassness just to try to shock readers. the story has potential, so if you can get past the crudity you might enjoy it.

I am not against vulgarity when it is used as a medium to portray a charter, and the author started off setting the main charter off like this. But with the continual use of misplaced lewd and vulgar commentary I found this book listened like, a attention deprived fifteen year old who just learnt how to swear. I couldn't get past the fact how the didn't create real charters with expect-able reactions. For example, if you just randomly killed two guys opened the back door to a van and found a kidnapped girl, the chances are that said girl isn't going trust or keep remotely close to you, let a lone take you hand and meekly stay by you. No the girl would be frightened, scared and probably want to go some where she feels safe, and that is not with you Mr. main character..... this happens a lot in the story making an unbelievable, and annoying listen.

I would recommend passing on this book.

I couldn’t get through an hour with the narrator. I can’t honestly judge the story, so it may be good, but again I couldn’t make it through with that narrator.

better as a book

Quite a good book, but the narrator is not for everyone he has something like a Valley Girl accent that irritates the heck out of me.

Good story, really bad narrator. If you're a fan of drag Queens with no talent for voice control than ya might like this. No offense to drag Queens but the whole " gay" voice narrating an adventure novel doesn't work for me. You may feel differently. If so, you might like this.

too much profanity for me

too much profanity for me but story did start to get interesting. not sure I will get next one

I have absolutely no problem with swearing whatso ever, but there was little variation with the characters and their phrasing and choice of words. its like there was no difference between characters besides their powers. that being said I did finish it. the story was good and I like the classes, it was not mechanic heavy and only showed the and I quote "bastard blood mage's" stats.

now the narrator had a decent variation in voices, but the way he spoke was disjointed and sounded like he recorded a bunch of phrases and strung them together. there wasn't a natural flow of conversation. I don't know if it was the recording or his style of narration. but I wouldn't listen to his books again unless I heard a sample.

Couldn't get into it

I try to listen to this story but with all the cussing It put me off the book. the Steele Alchymist & blade M age beast master where fun and Interesting books hope to see more books like them

This is a hard review to right it was just ok the story made me want to know what was going to happen next but the swearing and brutality gut a bit too much for me. If you like a dark bloody LitRPG then this is probably for you