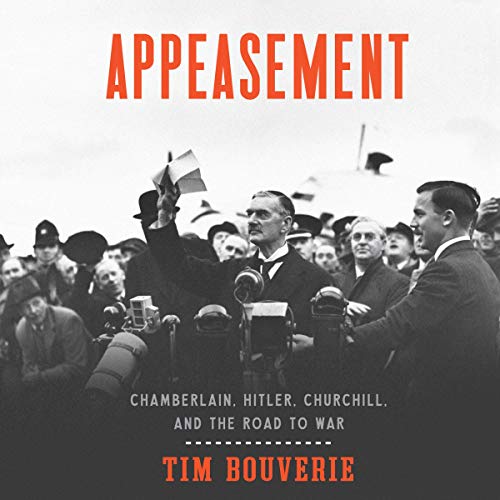 By: Tim Bouverie
Narrated by: John Sessions
Try for $0.00

On a wet afternoon in September 1938, Prime Minister Neville Chamberlain stepped off an airplane and announced that his visit to Hitler had averted the greatest crisis in recent memory. It was, he later assured the crowd in Downing Street, "peace for our time." Less than a year later, Germany invaded Poland and the Second World War began.

Appeasement is a groundbreaking history of the disastrous years of indecision, failed diplomacy, and parliamentary infighting that enabled Hitler's domination of Europe. Drawing on deep archival research and sources not previously seen by historians, Tim Bouverie has created an unforgettable portrait of the ministers, aristocrats, and amateur diplomats who, through their actions and inaction, shaped their country's policy and determined the fate of Europe.

Beginning with the advent of Hitler in 1933, we embark on a fascinating journey from the early days of the Third Reich to the beaches of Dunkirk. Bouverie takes us not only into the backrooms of Parliament and 10 Downing Street but also into the drawing rooms and dining clubs of fading imperial Britain, where Hitler enjoyed surprising support among the ruling class and even some members of the royal family.

Both sweeping and intimate, Appeasement is not only an eye-opening history but a timeless lesson on the challenges of standing up to aggression and authoritarianism - and the calamity that results from failing to do so.

“An eye-opening narrative that makes for exciting but at times uncomfortable reading as one reflects on possible lessons for the present.” (Antonia Fraser, author of Mary Queen of Scots)

“It is refreshing that Tim Bouverie, a bright young British historian, should devote his debut book to debunking many of the pro-appeasement myths and reminding us that, in fact, it should be the anti-appeaser Winston Churchill who deserves the laurels.... Mr. Bouverie has been diligent in researching the sources and has an eye for the telling anecdote and aperçu.... The appeasement story and its lessons are ones for the ages.” (Andrew Roberts, The Wall Street Journal)

“Comprehensive and immersive.... This is well-paced narrative history: intelligent, lucid, riveting - even while possessing the terrible knowledge of what happened next.” (Jennifer Szalai, The New York Times)

"An astonishingly accomplished debut. Bouverie writes with a wonderful clarity and we will no doubt hear a lot more of his voice in the future." (Antony Beevor, author of Stalingrad)

What listeners say about Appeasement

Being very interested in the subject matter, and having heard an interesting interview with the author, I bought this audiobook despite multiple reviews critical of the reader. To my regret, those critical reviews were right. The book is excellent, but the narration is awful. What a shame this book is not narrated by Grover Gardner or someone else whose style puts the emphasis on the text instead of on the reader. The narrator, Mr. Sessions, reads this book like an amateur Winston Churchill impersonator. His overly dramatic reading of straightforward factual passages, his unnatural emphases, pauses, tempo, and volume changes, and his all-around comical pomposity eventually made listening impossible for me. The story was gripping, but I could endure the reader for smaller and smaller periods until finally I could not take him at all. I am sorry about not being able to finish a book I would otherwise greatly enjoy.

Can't do it! Narratation too bad!

I'm very interested in this topic and, notwithstanding the other reviews, thought I could tolerate the narrator. After 1 hour 52 minutes I gave up.. Just horrible. I echo everybody else's sentiments. I will return the book and get it from the library instead.

I cannot tolerate the narrator

I have had my eye on this book for a while. I love the subject and from what I have heard so far the text is great. I cannot bring myself to go beyond the second chapter. The narrator is so over the top and I cannot stand it any longer. He acts out the quotations, which isn't objectionable in and of itself, but he overreacts it. Worse, he overreacts the expository and analytic segments of the text as well. The effect is completely distracting and I cannot go further.

I am returning the audiobook to get the Kindle text version indstead.

I think Tim Bouverie's text is fantastic though and I very much look forward to his future work.

Narration not as bad as some reviewers say

The narration isn’t great, but it isn’t so bad as to pass on this excellent audiobook.

Detailed and informative account of run up to WWII

Very well written and researched, this terrific narrative history provided me a much clearer understanding of what appeasement meant at the time and why that was (at the beginning at least, but excluding Churchill) the predominant thinking in Britain and other nations. It wasn't only Chamberlain by far. Although the narration is somewhat controversial, once I got used to his style, I was quite riveted to the story telling - normally I only listen to audio books during commutes, but I often continued listening long after reaching my destination (i.e. can't put the book down). Yes, the narration gets slightly over the top on occasion (so 4 stars for him), but he truly grabs my attention and does a reasonable job of impersonating historical characters such as Churchill and Roosevelt. Much prefer his style to the monotone recitals of many other narrators. Guess it's a matter of taste.

narrator goes from whisper to shout so you have to constantly readjust the volume lest you miss hearing something or get a headache from being yelled at. Worst narration in history

So I actually ended up loving the narrator...

First of all this book was extremely well written and full of new and interesting information about the lead up to the war.
At first I had a hard time with the narration because of his constantly changing volume. I spent all my listening time making the volume louder and softer. But about half through, either I got used to the narrator’s rhythm or he got better. I would definitely listen to him again!

Ouch! I really wanted to hear this book, but...

The 1930s Europe is one of my favorite periods of history, and appeasement is such an important topic. I was looking forward to this book, but, as like many other reviewers, the narrator made this book impossible to listen to. This isn't Shakespeare, Mr. Sessions, it's history. Too many British narrators try to over-dramatize, and this guy is the worst. Exceot for the women, who I can't understamd at all. Narrator, just read the book, please, this is not about you!

The book is long and overworked but necessary to do justice to such a difficult and complex topic. The book gives insight to such convoluted political beurocracy it is nightmarish in form. The dramatic narrator distracts from the topic and is only tolerable after drinking a glass of wine. Please get a different narrator to do the book and I will gladly purchase the book again.

Superb and comprehensive overview of a tragic era

Most of us are very familiar with the sad story of the attempt to buy peace with Hitler in the years before the Second World War. This outstanding work is a deep survey of what the various participants were actually thinking in private and saying in public. It is an engaging narrative that flows easily, relentlessly and dramatically. I found myself having a hard time putting it down.

I had given Chamberlain the benefit of the doubt prior to listening to this book. I assumed he understood the nature of the man he was dealing with in Hitler and was simply trying to buy time for Britain to prepare. Bouverie makes devastatingly clear, through Chamberlain's own correspondence and the musings of his closest confidents, that, in fact, Chamberlain was arrogantly naive and persisted in his misguided assessment of Hitler, despite all evidence to the contrary, to the point of his personal destruction and the near destruction of the civilized world.

The only negative is the narration. The narrator uses excessive amounts of sarcasm and just generally overdoes his performance. However, trust me, this book, this story, is so compelling that you will be glad that you endured the narration.

This is superb history.