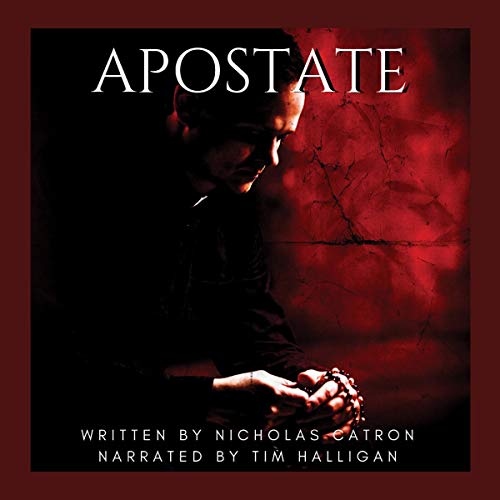 When Asher, a former Inquisition member, is shown the truth about God and the devil, he finds himself in a race against demons - both real and his own - to rescue a young hacker who holds the key to bringing down the Antichrist himself.

Leaving the Inquisition, Asher joins a small rebel group, exorcising demons and lending his expertise. With his faith shaken, his anger toward God near complete, he's given the task to find a young woman who's being hunted by the Inquisition and get her - and the information she's stolen - to safety. Can he find her before the Inquisition does, or will he destroy himself in the process?

Asher is an apostate. The Prophet, the one all of humanity serves, is actually the anti-Christ, and when Asher discovers incontrovertible proof of this, he leaves the Inquisition, a group of heavily trained gestapos who serve the Prophet and keep his laws enforced. Any religion which doesn't serve the Prophet has been outlawed. The Bible has been outlawed. Everyone has an RFID chip in their wrist or forehead with which they are tracked and use to spend credits. But there is also a resistance, and a young hacker stumbles across information which can bring the anti-Christ down and usher in the second coming of Jesus.

But everyone is after it now. Only Asher, who feels weak and unqualified, can help Maria, the young Hacker. But standing in his way is the hot on their heels Inquisition and a multitude of demons walking the earth. It seems even God has abandoned Asher, but when the time comes to fight, he finds a strength he never knew he had.

Talk about a bang-up fun time! I enjoy a good urban fantasy, and the mixture here with biblical lore and wild demons is about as much fun as a person can stand. The action takes off right away, and you'll be hard pressed finding a place to slow down and breathe for a second. It just doesn't stop. On display here is Catron's liquid prose which I've been a fan of for some time now, but also a character in Asher that has a major transformation in his arc, making him all the more compelling. He's weak, unsure, bumbling sometimes, but as the story progresses he changes and becomes something more and rises to the occasion to save the day.

There is some spectacular gore inside as well. I'm a horror guy, and while this story isn't really a horror story, there are scenes within which certainly fall into that category nicely. The relentless action keeps your knuckles white, and the characters are likable (sometimes hatable) and relatable.

There's not enough good to be said about APOSTATE. It's an original story within the confines of familiar subject matter. It's lightning-paced. It's exciting throughout. And it's the ONLY place I've seen a demon and a human have...an intimate moment? All seconds before a fight to the death!

Tim Halligan brings this book to life with his narration and does a fine job. I would love to listen to more of his work.

Don't pass this one up. Settle in for a fun read you won't regret. APOSTATE hits all the right notes.