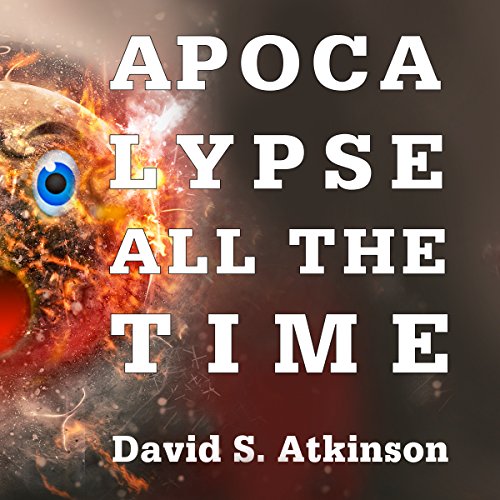 Apocalypse All the Time

Apocalypse All the Time

Apocalypse All the Time is post-post-apocalypticism. The apocalypse happens on a weekly (if not daily) basis and Marshall is sick of it. Life is constantly in peril, constantly disrupted, but nothing significant every really happens as a result. It's always handled. Marshall wants out; he wants it all to end. In short, the book explores what about the end times holds such fascination for humanity and what impact such a fascination has on the way we live our lives.

Anyway, for him, the end of the world is just another day and he is about as apathetic to the possibility of death as he is to making it to the next day, after all what is he in the cosmic scheme of things? The universe will happily go on without him.

That is, until he meets Bonnie, a retail working who nearly blows his head off when he goes shopping during the Power Outage Apocalypse. Soon , the go out on a date during the Zombie apocalypse (a picnic) and end up living together when the sun is about to explode.

Eventually, Marshall, the MC starts to feel and awaken thanks to Bonnie. They begin to protest and then become activists. And soon the story begins to shift into another direction with a slick twist ending.

Gary Tiedemann narrates smoothly, and does so in a way that reflects the feelings that Marshall is experiencing. He becomes more animated as Marshall begins to waken to life, and you really do get to experience things through his eyes.

This has a The Apocalypse Will Be Televised feel to it, a sort of reflection on the US's nonstop news feed mentality. I kind of see it as how we sort of adapt to our situation at hand, and become desensitized to all the background noise. Marshall is far too comfortable existing in a world that is on the brink of disaster every few days.

Like in his other books, David Atkinson writes about absurd situations (like a never-ending series of apocalypses) in ways that are clever, funny, and original. Tiedemann also does a good job of capturing Atkinson's style--I've seen the author perform his own work many times and was worried that his distinct voice might be lost in translation. This is a perfect audiobook for anyone who enjoys quirky sci-fi and a take on post-apocalytic literature that hasn't been done to death.

A never ending romp through apocalypse's

Any one of these apocalypses would make for a great sci-fi original grade b movie. All together it's an overwhelming never ending hilarious romp through absurdity after absurdity. The author and narrator deliver big time. The off shoot tales of oscar and Andrew are wonderful interludes. The ending is a wonderful twist and reveal. Highly highly recommend this one. I was voluntarily provided this free review copy audiobook by the author, narrator, or publisher.

This book has a lot of humor and sarcasim and once you learn that, it is a fun and entertaining listen. The performance by Gary Tiedemann was great.

It always amazes me, the ingenuity of the human mind to take a story that you feel you’ve heard every possible rendition of and a writer comes along and completely upends the genre with a unique spin.

Marshall lives in a post-apocalyptic world… scratch that. If there’s a different and totally random apocalypse happening every few days can you truly say you live in a post-apocalypse society? So many questions, so few answers! But Marshall isn’t looking for answers, he accepts the status quo with amazing calmness and a matter of fact attitude.

Apocalypse All The Time is a mixture of The Hitchhiker’s Guide to the Galaxy and Dr. Who. I found the running commentary amusing and the never ending cycle of post-apocalyptic events mind boggling. There are zombies, floods, explosions, people catching fire, basically everything including the kitchen sink!

This nearly six-hour audiobook is narrated by Gary Tiedemann and I like his style, his delivery is a little tongue in cheek and I’m partial to that type of reading. The audio and editing of the production are high quality.

If you’re looking for a unique sci-fi listen, that’s far from the standard fare, I recommend Apocalypse All The Time.

I received this audiobook free in exchange for an unbiased review.

The Hitchhiker's Guide to the Galaxy meets Groundhog Day and the Matrix. There were many times while listening to this audiobook that I almost turned it off thinking "This is stupid and has no point." Kind of like I did when I first watch Napoleon Dynamite. But there was something that kept me listening to see what would happen next. It was predictable, with little twists to keep it entertaining.

The narrator did a great job keeping the story going and changed rate and pace to keep pace with the storyline and dialog.

I will say I did not enjoy the interludes, I felt they were distracting and broke the flow of the story and skipped the majority of them.

I received this audiobook free in exchange for an unbiased review.

Have you listened to any of Gary Tiedemann’s other performances before? How does this one compare?

I enjoyed the narration of the book. It added dimension to the story and the character. The world building of a daily apocalypse was excellent. It brings out the story of a world that has become so jaded and disjointed but also added to the humor. I haven't read this author before but I am going to look for more after this book. Excellent resolution and ending of the story by the way. I was provided this audiobook at no charge by the author, publisher and/or narrator in exchange for an unbiased review via Audiobook Boom.

I have received this book free of charge so that I may post an honest review. I have taken to commenting on the narration in my headlines and putting it front and center because, lets face it, narration can make or break an audible book. I found this narrator to be perfect for the character in the story and the narration did not detract from the story being told at all. The story itself is a cute and enjoyable satire about the sad shape of the world as we know it. Shows how a large group of people begin to become numb and only having a group mentality after listening to 24/7 news cycles about impending doom and destruction.

Not your typical save the world story

Where does Apocalypse All the Time rank among all the audiobooks you’ve listened to so far?

I read the book right when it came out and loved it, so when I found the audiobook version with Gary Tiedemann I couldn't resist! This will be a book I read (or listen to) over and over again. It is not the predictable Apocalypse story you might be used to. It is clever, funny, easy to read, and encourages us to think about life and human nature. As someone who loves the world is ending kind of stories, I would definitely recommend this one. This was my first David Atkinson book, and I will definitely be on the lookout for more.

A very cool premise for a story and it's executed well. Quite a few laughs throughout (the story of the Jews for example) and had a good resolution. I enjoyed the little interludes as well and one in particular had me laughing quite a bit.

Story was good, but I must say that the narration was top notch! This was my first experience with him and I'm keen to check out more of his work.