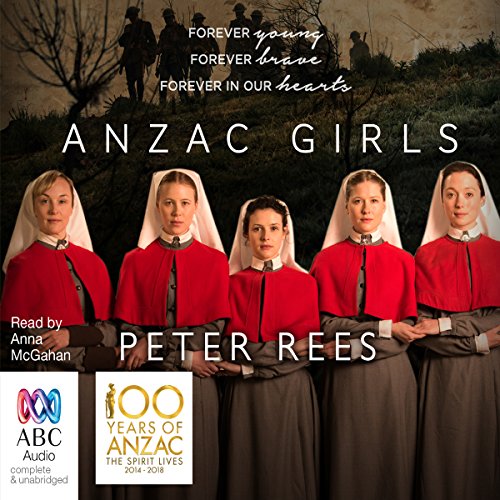 By: Peter Rees
Narrated by: Anna McGahan
Try for $0.00

The harrowing, dramatic and profoundly moving story of the Australian and New Zealand nurses who served in the Great War. Now a major six-part television series.

By the end of the Great War, 45 Australian and New Zealand nurses had died on overseas service and over 200 had been decorated. These were the women who left for war looking for adventure and romance but were soon confronted with challenges for which their civilian lives could never have prepared them. Their strength and dignity were remarkable.

Using diaries and letters, Peter Rees takes us into the hospital camps and the wards, and the tent surgeries on the edge of some of the most horrific battlefronts of human history. But he also allows the friendships and loves of these courageous and compassionate women to shine through and enrich our experience.

Profoundly moving, Anzac Girls is a story of extraordinary courage and humanity shown by a group of women whose contribution to the Anzac legend has barely been recognised in our history. Peter Rees has changed that understanding forever.

What listeners say about Anzac Girls

I listened to this after enjoying the television series so much. This is more documentary, historic narrative interwoven with excerpts from letters and journals. It is not a novel. So it might not be everyone's cup of tea. In fact, I might even suggest watching the television series first, and then listening to this for the background information (and in some cases the true story behind the dramatized version.)

Several people have mentioned not liking the narrator. I did find her voice took a little getting used to, in part because of her accent (I'm American), and in part because her delivery is soft, low, and slow. (I'm also a studio artist and listen while I work, so sometimes lose chunks of a book while concentrating on a process.) I started over three times, and then all of a sudden it clicked and I was fine for the rest of the book. By the end, I thought her voice was one of the audio book's great assets. Somehow by stepping back and not dramatizing with her voice, the drama of the narrative becomes front and center. I give her four stars only to warn people that they may need to work a little at first.

I expect to re-listen to this book at some point in the future. Really excellent.

Not nearly as interesting as the synopsis sounded

Has Anzac Girls turned you off from other books in this genre?

Would you be willing to try another one of Anna McGahan’s performances?

If you could play editor, what scene or scenes would you have cut from Anzac Girls?

I couldn't focus enough on the scenes due to the dull reading performance.

I love this book & have listened to it a few times since purchase. Every time I have, it still amazes me that (in a time when women were treated by society as "women"...it`s over 100 years ago after all) they showed such courage & determination to do their part & be with their boys who were fighting overseas. For me it`s poignant that these are the voices (diary extracts) of real & remarkable people...that coupled with some WW1 facts, makes it an enjoyable (although heartbreaking at times) listen. Very moving,inspiring & uplifting account of some of the unsung (until relatively recently) heroines of WW1. Unlike other reviewers, I found the narrators voice fitted absolutely perfectly with the tone of the book. To me, she spoke as if she were telling their stories as directly as they would have done. No added drama was needed as their stories & personal accounts say it all.

I am disappointed by this audio book. The narration was poor, Anna McGahan's voice was not unpleasant to listen to but she spoke in a monotonous monotone so that I continually found myself thinking about other things, not listening to what she was saying and losing track of the names and details of the personal mentioned. Due to her delivery I never built up a clear picture of who was who, and what was going on, she made the bravery, fortitude and events detailed in the book everyday and bland even though I was fully aware they were not. Because of her delivery I cannot fully judge if he text would have been better had I read the book rather than listened to it but I feel the nurses and soldiers who's lives were detailed in this book deserved better.

Impressive account of the lives of nurses in WWI

Lest we forget. The incredible efforts of Australian and New Zealand nurses during WWI are described in this book in a chronological way, based upon actual diary entries of nurses and soldiers alike. This brings you really close to the war with its immense losses and sorrows, and gives you a good first hand account of tragedies such as the sinking of the Marquette on 23 October 1915 or the devastation of the Spanish flu in 1918. A must-read for anyone interested in the Great War.

So well read and the story is so eye opening.
Nurses are usually left out of Anzac talk so it was wonderful to hear their stories.
Anna McGahan is excellent!

I couldn't put this book away. I had this completed in a weekend. Such strong women during this time in history.

Ive seen the tele-movie and really enjoyed this story, but listening to the dull drone of the narrators voice is intolerable. If there was a 0 star rating I would give it.