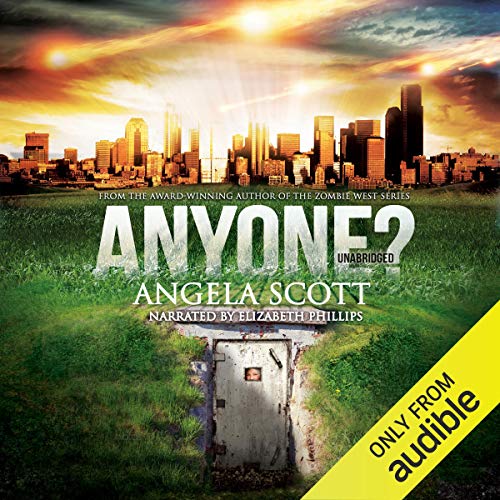 By: Angela Scott
Narrated by: Elizabeth Phillips
Try for $0.00

Evolved Publishing presents a young adult apocalyptic adventure from the multiple award-winning author of The Zombie West series and The Desert series.

The end of the world? That's the stuff of Hollywood blockbusters and deep philosophical exercises in school. No need to sweat it. So when 16-year-old Tess's doomsday-dad builds a bomb shelter in their suburban backyard, everyone thinks he's gone crazy.... Until fire rains down from the sky, sinking whole cities into colossal craters and setting much of the world ablaze.

Tess' dad gives her a few short minutes to gather her emergency bag and her freaked-out kitten, then leads her outside and into the underground shelter. Terrified, the last thing she expects is for him to leave her there all alone, but he has no choice - he must find her missing brother.

Before leaving, he makes Tess promise to keep the hatch door shut, not to open it for anyone but him, and to stay put until he returns. But he forgot to tell her one thing: What is she supposed to do if he never comes back?

What listeners say about Anyone?

Very good but makes no sense

There are no zombies. No guns. No action. No problems surviving, everything they could just pick off shelves. Mostly just two characters. No explanation for the bizzare end of the world events; meteors, inexplicably powerful storms and everyones just vanished. The story is very good and intrigueing until you realize you've come to the end and nothing makes sense. Reminds me of the TV series "Lost".

Yet Tess is an incredibly endearing character well portrayed by the narrator. At first I thought her reading as amateurish but some parts she executed brilliantly and smoothly. I realized she was just portraying an insecure, hesistent, lonely and frieghtened girl.

Tess meets a guy and there is some friction and romance going on; thats basically what the story is about. Except he is one of these mysterious things that dont make sense either.

So three stars for a very satisfying book which I totally do not regret buying, but would appreciate more if there was a sequel or any of it made sense.

Once upon a time, people were ok with stand-alone novels. Ever since Harry Potter and other books of its generation, it's now taken for granted that a story isn't fully developed if it isn't made into a series, even if by the third book the author seems to have exhausted his/her ideas and starts to pull cliches out of a bag of tricks to try to keep the story going. I've read many reviews in which the main complaint about "Anyone?" was that this is it, this book is all we get, the writer isn't planning a sequel. I can see why that might be frustrating, because we want to know more of certain characters and we want to know why it all happened. On the other hand, I like that, the same as the characters, we're left wondering, because sometimes life is like that, we don't get all the answers. I did feel the novel has many plot holes, such as the fact that the characters who're still alive barely find remains of those who died from whatever happened in the first part of the novel and whatever is going on in the rest of it. This is especially questionable when they go into cities and there's barely any signs of human casualties. Too convenient, in my opinion, although I wondered if we don't see these signs because the main character is also blind to them due to denial. The same thing with the number of survivor(s?) the main character comes across. If you turn a blind eye to these two aspects of the story, the rest is entertaining and a good twist on the apocalyptic scenario.

Written over a 3 day weekend, I suppose...

What would have made Anyone? better?

What would have made it better? Um... I guess a real plot, character development, and a decent ending.

What was most disappointing about Angela Scott’s story?

Lacks all the stuff I just mentioned.

It reads like a plot setting idea... a setting to write a plot in. This story doesn't have enough for me to call it an actual plot. It has as much as you might get over coffee... "I think I'll write a story about a girl who..." That sort of thing. The story isn't developed and the ending is a disappointment.

If you could play editor, what scene or scenes would you have cut from Anyone??

Oh, boy... what a question! Not worth my time to answer fully.

Narrator is good, but some inflections are wrong and she mispronounced some words. I did not care for her lowering her pitch to try to sound like the males. Her own voice is very nice and she is reading a book... no one expects her to SOUND like other people. She needs to just read in her own natural voice. Overall, the narrator's work is a lot better than that of the author.

What disappointed you about Anyone??

This book had absolutely no point. I have lost hours of my life listening to a story that had unlikable characters, minimal plot, and forced literary strategies. The main character must only know the adjective "weird" to describe any and all circumstances, even if those circumstances were not strange in any way. I could have gotten past the horrible character development, but the actual plot made no sense and did not come to any sort of conclusion. The author spent the whole time building a plot sequence that focused on the great mystery of where the male characters came from and who they were, only to end the story with no conclusion.

Would you ever listen to anything by Angela Scott again?

This question made me laugh out loud. Not at all.

The narrator was acceptable; however, the male voices sounded identical and the pronunciation of syllables was forced to the point of occasional annoyance.

I really enjoyed the book and the narration was awesome, but the I’ll be darned if I can understand exactly what happened.

Really enjoyed this audio book. Was a confused on what is actually happening to Tess but I’m sure it’s explained in the next book.

This was a very good book.A girl last sees her dad when he shoves her into their underground bunker and says not to open the door for anyone.The story from there is magical. Elizabeth Phillips was a fine narrator.I was given this free review copy audiobook at my request and have voluntarily left this review.'

This is a riveting post apocalyptic tale that is very entertaining. I didn't really like the ending though.

Well told story, characters were easy to like and relate to. Tess is the perfect heroine for the story.

Wow what a rollercoaster of emotions throughout the book, with a beautiful ending, narration was brilliant

One of those frustrating books

The narrator is annoyingly articulate. Someone who’s been trained in a choir to articulate their vowels!

It’s a pretty good story but either it has a sequel or it’s just one of those annoying stories that completely leaves you hanging. What the hell happened??