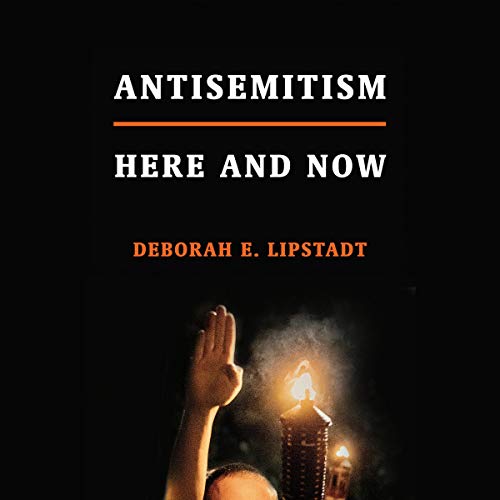 The award-winning author of The Eichmann Trial and Denial: Holocaust History on Trial gives us a penetrating and provocative analysis of the hate that will not die, focusing on its current, virulent incarnations on both the political right and left: from white supremacist demonstrators in Charlottesville, Virginia, to mainstream enablers of antisemitism such as Donald Trump and Jeremy Corbyn, to a gay pride march in Chicago that expelled a group of women for carrying a Star of David banner.

Over the last decade, there has been a noticeable uptick in antisemitic rhetoric and incidents by left-wing groups targeting Jewish students and Jewish organizations on American college campuses. The reemergence of the white nationalist movement in America, complete with Nazi slogans and imagery, has been reminiscent of the horrific fascist displays of the 1930s. Throughout Europe, Jews have been attacked by terrorists, and some have been murdered.

Where is all this hatred coming from? Is there any significant difference between left-wing and right-wing antisemitism? What role has the anti-Zionist movement played? And what can be done to combat the latest manifestations of an ancient hatred?

In a series of letters to an imagined college student and imagined colleague, both of whom are perplexed by this resurgence, acclaimed historian Deborah Lipstadt gives us her own superbly reasoned, brilliantly argued, and certain to be controversial responses to these troubling questions.

“Lipstadt aims not to break new scholarly ground but to awaken her audience to the nature, persistence and scale of the threat, along with the insidious ways in which it seeks to disguise itself. She succeeds.... She has written a book that combines erudition, clarity, accessibility and passion at a moment when they could not be needed more.” (Bret Stephens, The New York Times Book Review)

“A leading scholar of Judaism explores just about every manifestation of contemporary antisemitism, with plenty of history included for context.... A tour de force approachably presented.” (Kirkus Reviews)

“Keeping her tone measured and carefully noninflammatory, Lipstadt presents an intelligent, evenhanded explanation of why Jews come under attack today. Informed, historically sound, and deeply rational, her book offers both convincing reasons for the recent rise of antisemitism and apt advice to ‘call out and combat’ it.” (Publishers Weekly)

“Lipstadt’s book [is] crucial for understanding the dismaying resurgence of antisemitism - on both the right and the left.” (Randy Rosenthal, The Washington Post)

What listeners say about Antisemitism

I became interested in this subject because of the news coverage of Charlottesville and the shootings at the Pittsburgh Synagogue. Therefore, I decided to read this book.

The book is well written and researched. Professor Lipstadt explores the subject in a series of letters to fictional composites: Abigail, a Jewish student, and Joe, a non-Jewish colleague. Lipstadt examines current day antisemitism. The author also discusses the conspiracy theorists or ideologues who cannot be reasoned out of their view points. I enjoyed the discussion about how to spell antisemitism and the meanings put on words. Lipstadt skillfully examines antisemitism. In the last few years, I am surprised at how rapidly worldwide antisemitism has spread.

The book is seven hours and thirty-seven minutes. Ellen Archer, Paul Boehmer and Phoebe Strole do a good job narratoring the book.

Perfect for the College Student or Professor

I was disappointed this wasn't in the same genre I had hoped, as the author's other book "Denial" had left me unable to put the book down, as I devoured it in one sitting. This book is positively perfect for the college student or professor who is in the current on campus setting vividly described in the entirety of the book; however this isn't a good book for a mom's coffee club or book club. As usual, Lipstadt is on point in her narrative, however I was hoping for more every day familial instances. I can't wait to see what she comes up with next.

I wanted a way to respond to antisemotism but found none. it didn't fit my wishes.

It really is all around

(As posted in GoodReads)
This book was so full of information! Yes, I am a Zionist, and I am a Jew, so I suppose that these facts could possibly flavor my review, but I still try to look at things from an unbiased perspective. The overall format was surprisingly effective; the questions from a Jewish student and the non-Jewish professor addressing the question of antisemitism seems to cover the question fairly well.
The fact that antisemitism continues to raise its ugly head (cliché, I know…) Is pointed out and explained fairly thoroughly and frighteningly. Whether this defines an and to Judaism is also addressed! But the fact that certain stereotypes and preconceptions are just let go is telling about antisemitism overall what IS antisemitism in the end? It can be far less obvious and more insidious than we would like to believe. And yes, EVERYONE, Jewish or not, has to deal with it. Is it as bad as overall racism? It's DIFFERENT, but in many ways YES, it is as bad.

A must read (listen)

Very informative. The letter format made it feel very personal and not like a class assignment.

I read this book in 2021. So Joe Biden is our President. I know Donald Trump was an idiot. His contribution to racial discord is well documented. The author devoted too much time to the Trump Presidency. So what about the Democratic Party? Switched to the Labour Party of Great Britain’s is a cop out. Louis Farakkan and Al Sharpton sat with Hillary Clinton at Aretha Franklin’s funeral. The left in America has an anti Semitic problem. In Brooklyn, Orthodox Jews are routinely assaulted . This is completely ignored in this book.

And what about Trump acknowledging Jerusalem as the capital of Israel by moving the Embassy. So even though he didn’t speak out against anti semitism, his policies were pro Israel. This book was a shallow explanation of anti semitism.

The book is filled with valuable perspective, historical facts, a whooooole lot of anecdotal evidence but, most baffling, is formatted as the author replying to letters from people she's... made up. That conceit, and how it's implemented, was getting under my skin to the point where I struggled to get through this!

However, the narrator(s) was absolutely fantastic and helped me power through, so thanks for that.

Who the F thought of this concept? The two asking questions and the author providing answers. That’s not a book, that’s a transcript.