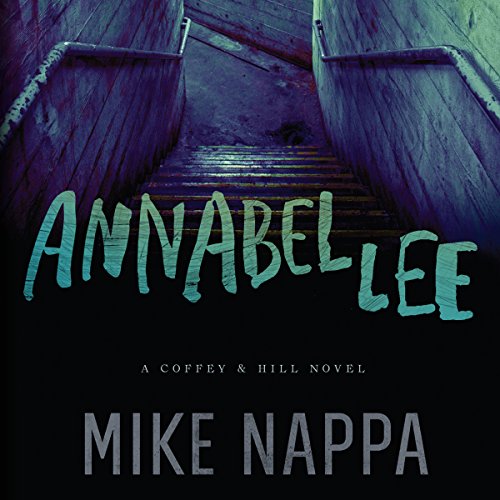 By: Mike Nappa
Narrated by: Romy Nordlinger
Try for $0.00

Fourteen miles east of Peachtree, Alabama, a secret is hidden. The secret's name is Annabel Lee. She doesn't know why her enigmatic uncle has stowed her deep underground in a military-style bunker. He's left her with a few German words, a barely controlled guard dog, and a single command: "Don't open that door for anybody, you got it? Not even me."

Miles away in Atlanta, private investigator Trudi Coffey is visited by a mysterious older man calling himself Dr. Smith. He's been trailing a man for a decade - a man she met through her ex-partner, Samuel Hill - and the trail has led him to her office. The last thing Trudi wants to do is to contact Samuel. But it will take both of them to unravel this mystery - before it's too late.

What listeners say about Annabel Lee

One of the best books I’ve ever listened to . . . in more ways than one. It had me guessing. It wasn’t graphic, but it absolutely made my heart race until the end. It was the perfect portrayal of good verses evil, and oh my, it wasn’t amateurish. And the very best: These grown up folks have a grown-up faith. Not all of them, of course. But like in real life, every level of belief exists, from none to wavering to solid. And room for testing, for questioning. Gun toting, freedom fighting, ex-military . . . hiding a little girl in an underground bunker . . . I couldn’t stop listening . . . exceptional resolution and the afterward was amazing.

Narrator made the book

Narrator was incredible. She made the entire book! The different languages were spoken precisely.
Annabelle’s character was inspiring. Trudy was quite the woman.