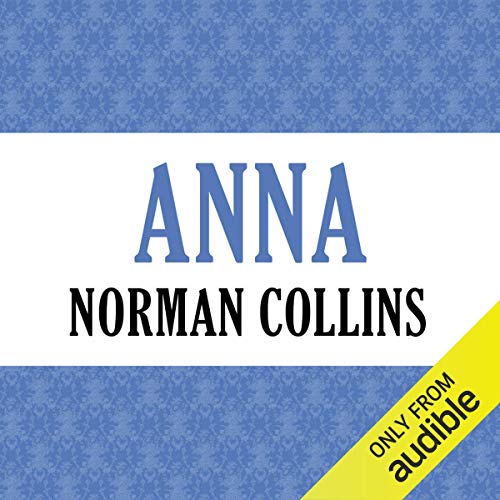 Anna is the story of a woman and an era. Against the background of France and Germany at the time of the Franco-Prussian war of 1870, Norman Collins tells with great brilliance the story of Anna, a beautiful woman.

Born in Rhineland, when she was 19 she fell in love with a French cousin whom she followed to Paris on the eve of the outbreak of war. When he was killed by her compatriots she found herself in besieged Paris, destitute, alone, and a German.

Thrown into prison, she got out only by marrying a middle-aged restauranteur for whom she had no feeling. These are the opening incidents in a novel that is full of incident, of tragedy, and of adventure, and which carries Anna from France to Germany, and finally to England, where at last she finds both peace and happiness. Few historical novels have a wider scope, a more enchanting heroine and a stronger theme. Here is one of the best of Norman Collins' major novels.

Would you try another book from Norman Collins and/or Tatyana Yassukovich?

Yes, I think I will. I enjoyed the performance to a point... perhaps (I will admit that I am biased, but I do not particularly like the way British narrators pronounce French names and places); and greatly enjoyed the author's writing style... but perhaps because of my narrative snobbishness, or perhaps because the book was more soap opera than epic, I cannot recommend the book itself. The narrator and the author were both good in their way, but the book itself and the French mispronunciation just didn't do it for me.

I expected to admire Anna for her strength and find her "enchanting" (to quote the publisher's summary), but I could not do so... she was primarily crying and whining about being trapped. For a woman who contemplated the convent, she is incredibly sexually available to men... Every major male figure in the first 2/3 of the book was sexually attracted to Anna, abusive to her, "forced" her to marry them, or disowned her (in the case of her father). Perhaps it is indicative of European culture, but the book is more about Anna's history with men than it was about the war itself upon her.

Maybe others will like this, but I honestly wasn't a big fan. I will try more Norman Collins' books, and more by the narrator, but this combination wasn't for me.

There are some good sections in this book, particularly the description of the Franco-Prussian war and the siege of Paris, however, there is a lot of repitition in the story and I feel an abridged version of it would probably work better.

The main flaw for me was that the central character, Anna, is not very likable and by the end I didn't really care what happened to her. Norman Collins is a great storyteller but this story didn't keep my attention at all as much as some of his other books.

What aspect of Tatyana Yassukovich’s performance might you have changed?

The pronuncation of some of the words, both in English and French, is a bit odd but overall she does her best with mediocre material.

Could you see Anna being made into a movie or a TV series? Who would the stars be?

No, I really could not see this happening. The story is too dated and predictable for a modern audience.

It is strange, given the fact that Audible has released 8 of Collins' book, that his two best and most famous books "London Belongs to Me" and "Children of the Archbishop" are not available for listeners.