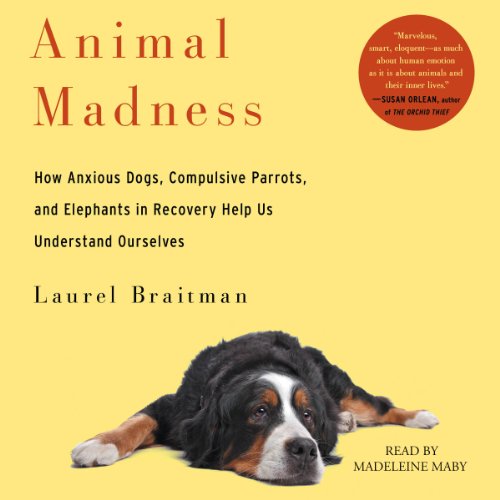 By: Laurel Braitman
Narrated by: Madeleine Maby
Try for $0.00

For the first time, a historian of science draws evidence from across the world to show how humans and other animals are astonishingly similar when it comes to their feelings and the ways in which they lose their minds.

Charles Darwin developed his evolutionary theories by looking at physical differences in Galapagos finches and fancy pigeons. Alfred Russell Wallace investigated a range of creatures in the Malay Archipelago. Laurel Braitman got her lessons closer to home - by watching her dog. Oliver snapped at flies that only he could see, ate Ziploc bags, towels, and cartons of eggs. He suffered debilitating separation anxiety, was prone to aggression, and may even have attempted suicide. Her experience with Oliver forced Laurel to acknowledge a form of continuity between humans and other animals that, first as a biology major and later as a PhD student at MIT, she'd never been taught in school. Nonhuman animals can lose their minds. And when they do, it often looks a lot like human mental illness

Thankfully, all of us can heal. As Laurel spent three years traveling the world in search of emotionally disturbed animals and the people who care for them, she discovered numerous stories of recovery: parrots that learn how to stop plucking their feathers, dogs that cease licking their tails raw, polar bears that stop swimming in compulsive circles, and great apes that benefit from the help of human psychiatrists. How do these animals recover? The same way we do: with love, with medicine, and above all, with the knowledge that someone understands why we suffer and what can make us feel better.

After all of the digging in the archives of museums and zoos, the years synthesizing scientific literature, and the hours observing dog parks, wildlife encounters, and amusement parks, Laurel found that understanding the emotional distress of animals can help us better understand ourselves.

What listeners say about Animal Madness

This book will touch you deeply and leave you believing there is hope in the world. Laurel Braitman begins with the story of her own adopted dog Oliver, who was clearly emotionally disturbed (at some point diagnosed with separation anxiety, phobia of thunderstorms and a form of animal OCD). Her interest in the plight of Oliver eventually led her to start combing the records for stories of other animals who had strange behaviors, not always understood by their owners, to see if there were indications that other animals have emotional illnesses, much as humans do.

The stories she tells, of dogs, cats, elephants, gorillas, etc...who exhibited unusual, sometimes frightening behaviors, have often resulted in tragic outcomes. But she is able to trace many of the conditions described to similar backgrounds for the animals--such as too early separation from a mother, abusive care from humans, being uprooted from familiar surroundings. She talks with animal behavior specialists and human psychiatrists about treatment for such animals.

There is extrapolation from the suffering of animals to the suffering of humans--in both cases leading to mental illnesses (and in more recent times the knowledge and ability to treat them). But she is very careful not to anthropomorphize (project our human beliefs and conditions onto the other animals). This book is fascinating to listen to. If you love animals it should be a "must read" (listen) on your list. It reminded me, in some ways, of the very moving book by Virginia Morell, "Animal Wise," in which she shows repeatedly how our fellow animals have a wisdom in life that we often miss.

The narration is very good, but in books of this sort, I often find myself wondering why they are not read by the author. Nevertheless, this book is wonderful. I stayed up late into the night listening to it. Highly recommend!

We have so much to learn.

What made the experience of listening to Animal Madness the most enjoyable?

Probably the author's innate curiosity and desire to know what made her dog act as he did. It was very relatable.

Hmmmm... Probably the stories about primates and a close second about the elephants. There are so many people in rural parts of this world who sacrifice so much just so, for example, an elephant doesn't have to cry himself to sleep.

She disappeared into the story. She didn't get theatrical and let the stories stand on their own merit.

I hate crying while listening because I don't want to look like a nut, but the parts about the abuse of circus, and other, elephants hurt me to my core. That, and the testing animals had to go through so we could learn fundamental truths in psychology.

Nothing. I hated this book. The advertising, blurbs, etc. were misleading. I did not finish it because I got tired of listening to her heartbreaking stories of horrific animal abuse and simplistic theorizing. And then she started on with her political propagandizing about captive animals. I don't even disagree with her for the most part, but that is not what I got the book for. I have no interest in paying her so she can vent.

What was most disappointing about Laurel Braitman’s story?

I don't know how this could have been narrated well so I hate to blame anything on the narrator. Her semiamused tone was perhaps as appropriate as any.

I'm a psychologist. I have studied primate behavior. I expected more from the author that heartwrenching anecdotes about animal tragedies.

a magazine article at best

This is a meditation that goes nowhere. The narrator has a very pleasing voice and delivers the prose in a robotic formula. Altogether I just could not finish the book. I am interested in the subject but the subject never really seemed to arrive. Altogether too personal both in the prose and narration and never really finds the rest of us.

If you love animals.... you will love this book

If you could sum up Animal Madness in three words, what would they be?

What other book might you compare Animal Madness to and why?

I am not sure there is a book that compares the kind of writing this book has. It moves from animal treatment - pet, zoo and wild - to the pharma industry pretty seamlessly.

She read the book like it was her own. In fact, I thought she WAS Ms. Braitman.
However, one thing that bothered me was she mispronounced the word "supposedly" several times. Suppos-ob-ly. Yikes. When you listen to books, word pronunciation is so important. I have not liked a couple of books solely based on the readers, and that is unfortunate.

Come into the world of synapses, mania, depression, prozac, fido and zoos.

I did not want this book to end! It was so full of great stories and information. I picked it up because of a pet who has had some "issues." I found out that we are not alone. Then I found out that there is a world out there that is so much bigger when it comes to these kinds of things. It made me think about brains, mental illness and all animals in an entirely different way. I have never been a fan of caged animals but this gives a whole new meaning to the word.

I would have liked end notes, footnotes, etc. I contacted both Audible and the author. When there are so many things referenced in a non-fiction book, a file of some sort should be included. A paper book is easily flipped through but not so with audibles.

mental illness and pharmaceuticals for animals

I never would have imagined these things to be true. Animals with mental illness and animal flavored Prozac. are just a couple of the things that shocked me in this book.

just an outstanding gut wrenching heart breaking book. for anyone who has a pet, this book is for you.

Wow I learned so much

What did you love best about Animal Madness?

What other book might you compare Animal Madness to and why?

Can not think of any at this time

Have you listened to any of Madeleine Maby’s other performances before? How does this one compare?

No I have not

No it is too long for that

The good news is that there is often and possible human redemption in our care taking of our pets and the worlds animals. Her book shows us that we are all animals worthy of care and support regardless of our own special "madness".

For those who are interested in theories connecting animal behaviour, here including human's, to emotional feelings.