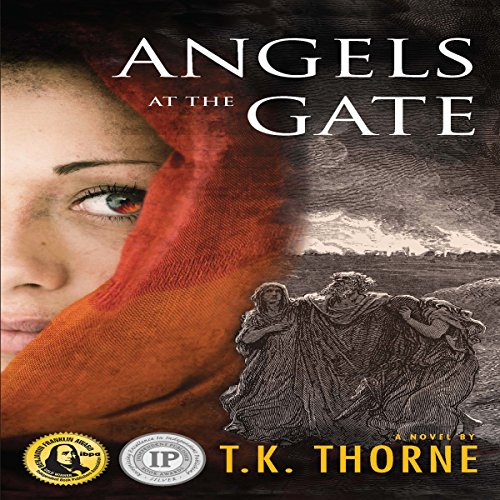 Angels at the Gate

Secretly raised as a boy in her father's caravan and schooled in languages and the fine art of negotiation, Adira rejects the looming changes of womanhood that threaten her nomadic life and independence. With the arrival of two mysterious Northmen, rumored to be holy men, Adira's world unravels. She loses everything she values most, including the "Angel" who has awakened her desires. Caught between her culture and freedom, and tormented by impossible love, she abandons all she has known in a dangerous quest to follow the "Angels". With only her beloved dog, Nami, at her side, Adira must use all the skills she learned from her father to survive the perils of the desert, Sodom, and her own heart.

Angels at the Gate is a story of adventure and the power of love, a compelling saga based on historical research about the ancient biblical world of Abraham, Sodom and Gomorrah, and the woman who "became a pillar of salt".

What listeners say about Angels at the Gate

fabulous story with deep characters and amazing story of humanity. the performance is especially moving

An insightful twist that brings the ancient, biblical world alive.

While the author could have easily fallen into the typical girl-pretends-to-be-a-boy-to-survive-in-a-man's-world motif, Thorne expertly developes each character to be believable and real within their historical/societal cofines.

Even though the main biblical characters have a minimal role in this story, the author uses them to shape, guide, and redirect the protagonist's character and actions.

Ginger Roll does an exceptional job narrating the story, especially with transitioning between male and female voices in conversation. Too many times narrators cannot pull off one gender or the other without sounding false or nondescript - making many of the voices the same. Roll makes the voice of each character distinct and easily distinguishable - very helpful for those long conversations where not seeing the text becomes a handicap to understanding who's speaking.

Overall, the story was compelling, creating real attachment and identification with the characters. The venue of each scene was so well written that one could taste the dry deserts and smell the sulfur pits.

The story only got four, instead of five, stars due to the author's use of creative license in explaining the power source of El's messengers, but this may be just a personal preference due to personal scholarship. However, illusions to the messagers being from very distant ("lost") lands (possibly Celtic) was an intriguing addition. It would have lost only half a star of that was possible.

Well done. A recommended read for all.

I truly love this story and the other story I listen to by this author.