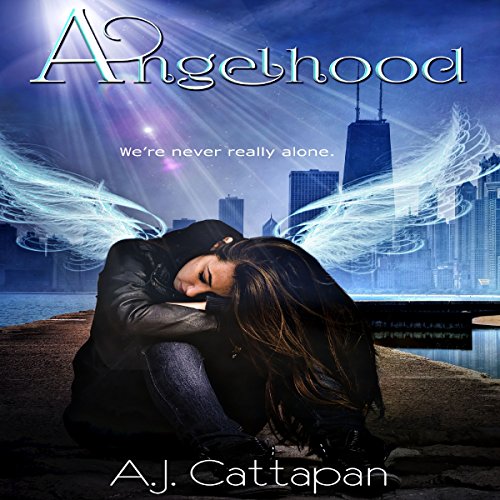 Seventeen-year-old theater geek Nanette believes her life is headed toward stardom on Broadway. But when her dream theater college rejects her and her best friend dies in a terrible accident, Nanette decides the world would be better off without her. Unfortunately, the afterlife offers something less than a heavenly situation. Trapped between alternating periods of utter darkness and light, Nanette is stuck following a high school freshman around. Soon she learns she's a guardian angel, and the only way she can earn her wings is to keep her young charge, Vera, from committing the same sin she did - taking her own life.

Unfortunately Nanette is missing more than just her wings. She has no tangible body or voice either. Frustrated by her inability to reach out to Vera and haunted by memories of her old life, Nanette wants to give up, but then she sees what happens when another Guardian at the high school turns his back on his charge. The shock is enough to supercharge Nanette's determination. She's going to find peace in the afterlife - as soon as she can convince Vera that living is what life is all about.

Valuable Story Demonstrating Every Person's Worth

Angelhood offers important messages about hope and regret through the first-person account of 17-year-old Nanette, who, in the first chapter, puts a gun to her head and pulls the trigger. From there she embarks on her “angelhood.”

Despite the name, the body-less souls, and the acquisition of wings, the period of “angelhood” bears more resemblance to purgatory than angelic life. In order to gain her own redemption, Nanette is assigned a charge whom she must prevent from making the same fatal mistake she did in taking her own life.

Nanette shadows a friendless, angsty poet named Vera, whose mother has succumbed to breast cancer. Despite Nanette’s frustration with Vera’s anti-social, “loser” ways, she takes her task seriously and struggles to find means to influence Vera’s behavior and help her see the wonderful possibilities around her.

Throughout the novel, Nanette and other angels, including her mentor of sorts, Warren, engage in spiritual warfare in defense of their charges and their own journey towards sainthood. Darkness and evil tempt and taunt, eager to draw souls to their eternal torment.

Interspersed with the action are Nanette’s memories – both those leading up to her suicide and happy memories with her sister, mother, and fellow theater geeks. Not only does concentrating on positive memories help her to grown in grace, it also enables her to see clearly the rashness of her life-ending decision.

While Nanette had seen death as an escape from her various troubles, she now realizes that not only has peace eluded, her but her absence has had profound effects on her family members as well. Her perspective matures and broadens, allowing her to see hope where in the past she felt despair and to recognize, in theater terms, that comedy and tragedy exist side by side.

There are several twists, turns, and revelations along the way to maintain tension and keep the reader engaged.

In the years following the suicide of a friend’s 15-year-old son (also by gun), I’ve become hypersensitive to its frequent portrayal in media. While its depiction here made me uncomfortable, the overriding, hopeful message integrated so seamlessly into Nanette’s memories and experiences convinced me of its valuable message for teens in particular, who think their life isn’t worth living and the world would be better off without them.

I listened to Angelhood on audiobook, which opens me to distraction more than reading print does. It can also be a challenge to hear over the noise level and kid interruptions in my home. I did, however, enjoy the narration, which fit Nanette’s voice well.

What made the experience of listening to Angelhood the most enjoyable?

Kaitlyn Radel did an excellent job bringing the characters to life with her reading. The story of teen suicide and the conflicts of adolescence was well written and not depressing, but hopeful.

What was one of the most memorable moments of Angelhood?

When Nanette realized she was growing into Angelhood

Which character – as performed by Kaitlyn Radel – was your favorite?

If you could take any character from Angelhood out to dinner, who would it be and why?

Vera, the potential teen contemplating suicide who Nanette helps. Since her father rarely eats dinner with her, I think she needs some company and a night out for pizza.

Angelhood by A.J. Cattapan skillfully handles teenage suicide and brings attention to how growing up in this complicated world can be difficult for young adults. The teen characters were genuine and their struggles were authentic. As the main character grew into Angelhood she also blossomed into a young adult full of faith, hope, compassion and understanding. I recommend this book for any teen because it brings attention to the rarely discussed, but very important matter of suicide.