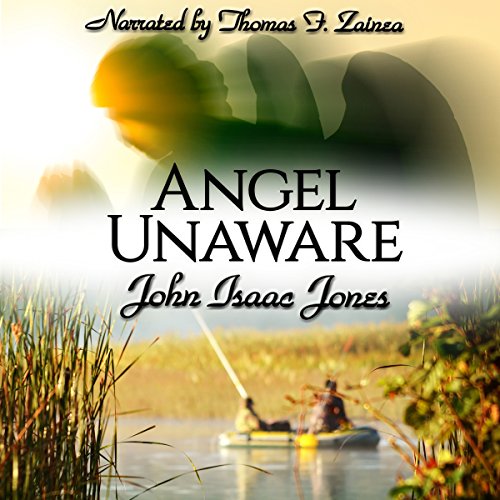 By: John Isaac Jones
Narrated by: Tom Zainea
Try for $0.00

"Be not forgetful to entertain strangers for some have entertained angels unaware." Hebrews 13:2

When his father died, Billy Johnson felt he would never lose the vicious, gnawing grief that had formed in the innermost recesses of his soul. His father had been his mentor, his adviser, his fishing buddy, his protector, and most of all, his dearest and closest friend all of his life. It was grief he felt he could never be totally free of. Then, without his direct knowledge, a miracle occurred!

What listeners say about Angel Unaware

Healing through an unexpected source

This is charming story in which a son finds healing and closure after the death of his Father in a most unexpected way. The story is well written and I was left with an unmistakable uplift and the moral to this story was unmistakable. If you like stories that make you think, listen to this book. If you like a story that leaves you feeling good inside when it ends, listen to this book. If you only have an hour to spare and want a little thoughtful entertainment, buy this book and enjoy.

I was given this book for free in exchange for this unbiased and honest review.

Made me want to call my Dad 😢

With a melancholy start, Billy looses his beloved father. John gives beautiful details of Billy recounting the precious moments he had with his father. The grief for the loss Billy endures is almost unbearable, then a friendship blossom's that helps to fill the void. John's style of writing is so engrossing I'm always captivated by the beauty of his story telling. I highly recommend this wonderfully narrated book. If you haven't experienced this gifted author's work you should definitely pick up one of his book's. I was given this free review copy and have decided to voluntarily leave this review.

When Billy Johnson lost his father, he lost the best friend he ever had. Billy and his father did everything together, and he felt he would never lose the gnawing grief that had taken over him.

Low and behold, he had help from an unsuspecting friend.

Good story!Tom Zainea did a fine job narrating.I was given this book by the narrator,author or publisher free for an honest review.

Would you consider the audio edition of Angel Unaware to be better than the print version?

Yes the narrator brought the story to life. He did a great job at reading the book.

I like the story because it reminded us that we need to love our family while they are with us, that we need to prepare for where we are going when we die, and that we never know when we can bless someone by something we say or do.

Which character – as performed by Tom Zainea – was your favorite?

All of them were really good so it's hard to say. All the voices I heard were unique and easly to follow.

Who was the most memorable character of Angel Unaware and why?

Billy I guess. I think he touched me most with the two losses that he suffered in the book. John writes so well that you an feel the emotions of his characters.

I'll just say that I do believe in Angels, but I don't think any of them drink. But after all this is fiction :)

John Isaac Jones has once again written a lovely, thought provoking short story. I get so caught up in the emotion of the words he writes and it truly touches my heart and soul.

I would have say I enjoyed this book but I don't think this was what the book meant I don't think it was a pass over story I think it was more this story meant to teach us a lesson and I think the lesson was very well learned in such a short book the understanding of death is very difficult for us humans but I think the story did it very well
I was given this free review copy audiobook at my request and have voluntarily left this review.

I'm at a loss for words to describe this story. It's unusual to be deeply touched by such a short story, but somehow it's been written to that I immediately found myself attached to Billy. The story is beautiful and touching.

I love the idea that angels walk the earth and come into our lives when we need them most.

The narration is excellent and does a great job of conveying the emotions of the characters.

comes along that speaks to one's heart; even moving you to tears. Having lost my father a year ago, this was a story that, as it did for the main character, served as a spiritual catharsis. While we all experience the death of those closes to us, John Isaac Jones writes of such an experience in a poignant, yet at the same time beautiful, fashion. While the details of our experiences may differ greatly from those in the story, the author delivers is such a way that most all should be able to empathize. The narration by Tom Zainea (who has been the voice in a few of the author's works) does a wonderful job of bringing the scenes and southern setting to life. It all works beautifully in a short 35-minutes.

That being said, and I would be remiss not to mention, I do not believe in ghosts, reincarnation, or karma which are touched upon in the story. However, the introduction does quote Hebrews 13:2 and as a born again Christian I do believe in angels and that my God works in many ways to bring comfort to his people. Perhaps the author was trying to hit the heartstrings of a audiences with differing beliefs; I simply smiled at the new-age references and saw the hand of God in the story . . . as I see it in my life.

Anyway, I highly, HIGHLY recommend this short story to listeners of all ages and backgrounds as it is truly a topic that we all walk through at some point in our lives. I am also of the opinion that this work, like others by John Isaac Jones, is a much more powerful as a listen than it would be if read. A review copy of this audiobook was provided by the author, narrator, or publisher at no cost in return for this unbiased review. If you found this review helpful, please take a moment to click yes below.

Sometimes you take a chance on a new book because it calls to your own spirit. I have been grieving the loss of my mother since 2011. I still miss her everyday. Her laugh, her jokes. Her way of always being there even with six other siblings. Narrator did an excellent job. I received this book at no charge in exchange for an honest review. Sometimes you brink and see the shadow of the one you miss. The turn of a head. A certain walk. Sometimes its angels reminding us we are never alone.