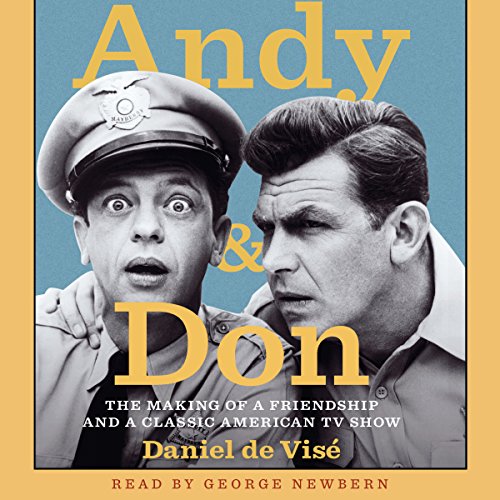 By: Daniel de Visé
Narrated by: George Newbern
Try for $0.00

A lively and revealing biography of Andy Griffith and Don Knotts, celebrating the powerful real-life friendship behind one of America's most iconic television programs.

Andy Griffith and Don Knotts met on Broadway in the 1950s. When Andy went to Hollywood to film a TV pilot about a small-town sheriff, Don called to ask if the sheriff could use a deputy. The comedic synergy between Sheriff Andy Taylor and Deputy Barney Fife ignited The Andy Griffith Show, elevating a folksy sitcom into a timeless study of human friendship, as potent off the screen as on. Andy and Don - fellow Southerners born into poverty and raised among scofflaws, bullies, and drunks - captured the hearts of Americans across the country as they rocked lazily on the front porch, meditating about the simple pleasure of a bottle of pop.

But behind this sleepy, small-town charm, de Visé's exclusive reporting reveals explosions of violent temper, bouts of crippling neurosis, and all-too-human struggles with the temptations of fame. Andy and Don chronicles unspoken rivalries, passionate affairs, unrequited loves, and friendships lost and regained. Although Andy and Don ended their Mayberry partnership in 1965, they remained best friends for the next half century, with Andy visiting Don at his deathbed.

Written by Don Knotts' brother-in-law and featuring extensive unpublished interviews with those closest to both men, Andy and Don is the definitive literary work on the legacy of The Andy Griffith Show and a provocative and an entertaining listen about two of America's most enduring stars.

What listeners say about Andy and Don

When I first started listening to the book I didn't think the reader did a very good job, but I warmed to him as the book progressed.
I was, and still am, a huge fan of the Andy Griffith show and loved listening to the background of the show's two main actors. I was so impressed how close they remained over the years
The final two chapters were,I found, so very moving.
A wonderful book!

A lot more details then I'd expected great book. Reader was a pleasure to listen to also.

Would you listen to Andy and Don again? Why?

Would I listen to Andy and Don again, not sure. It is a great book but it maybe to painful.

The best thing about the book was that it told it like it was. It gave history that I did not know. These two great artists really understood and loved each other. It helped explain why I loved the series and them so much and the movies and appearances they made together and seperately .

The entire book was my favorite scene. If I did have to pick one, it would be the times when Andy and Don worked together.

When the book came to Don's passing, there was tears in my eyes and the same at the end of the book when Andy passed. Yes, both of you will be in heaven, together, happy, and making others laugh and smile.

I decided to purchase and read the book because of the cover. I and my family have loved the "Andy Griffith Show with Don Knotts" since it first came out. I own all of the episodes so I can see them when I want. These men where far from perfect in real life, but think of all of the enjoyment they both have given over the years, and will continue to give, to common people like me in the future. My kids, who don't really like "old TV series", will sit and watch and laugh at these show. Andy, Barney, Opie, and Aunt Bee have certainly brought a lot of enjoyment over the years to a great number of people.

This book told it the way it was, the good, the bad, and the love. I liked the way the author went back and forth between the two. I found a great number of similarities between Andy and Don. Show business can be real tough. The book went through all of this for the both of them. I will never look at the series that same way again.

Though I'm sure all of the stories were factual, it seemed to mostly focus on the dark mood of both men, their lowest points and everything that made them hate life. This could be due to the men, or those in their life, only revealing the dark details of behind the scenes gossip. I was hoping to get a picture of the great friendship they had. This story only seemed to focus on the depressing side of their relationship.

On the plus side, I did still enjoy the journey, and especially the warm tone of the narrator. The author did not linger too much on the men's childhoods (a plus for me).

The story just seemed unbalanced towards the demons, and too little focus on the clowns.

Would you consider the audio edition of Andy and Don to be better than the print version?

Absolutely! Without a doubt!

The respect these two wonderful actors had for each other. They just 'clicked' and they were funny together.

Have you listened to any of George Newbern’s other performances before? How does this one compare?

Don't believe I have heard him before but he did a great job with this book.

When Don was dying and Andy came to see him.

I really enjoyed learning about the men that star in a show I love.

Like all men, they had their flaws. Parts made me laugh out loud. Other times I wanted to cry because of the pain I could imagine these people went through.

Andy and Don a wonderful read

Loved this tribute to two wonderful actors. although the pictures painted were not always flattering, they friendship and humanity between these two glowed throughout the book.

Good story, but a little too long

I grew up watching Andy Griffith and Don Knotts on the Andy Griffith Show. I really enjoyed the stories in this book, but after a while, the book drug on. Too many details became repetitive and it seemed like the book would not end. I think some of the material could have been left out or abbreviated without compromising the story. The narration was excellent and the overall book is good.