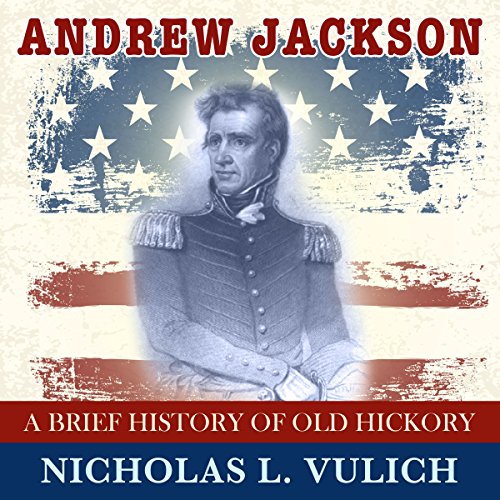 By: Nicholas L. Vulich
Narrated by: Richard Rieman
Try for $0.00

Andrew Jackson has the dubious honor of being the first President to have an assassination attempt made upon his life.

Picture this: 63-year-old Andrew Jackson is walking across the Capitol Rotunda. Richard Lawrence, an unemployed house painter, moves to the front of the crowd. He fires two pistol shots into the President.

By luck, both pistols misfire. The aging Jackson charges the attempted assassin, beating him to the ground with his cane.

Jackson was no stranger to death or weapons. In his lifetime he fought three duels, faced down the Creek Indians, and ultimately fought the final battle of the War of 1812 at New Orleans.

Thomas Jefferson wrote: I feel very much alarmed at the prospect of seeing General Jackson President. He is one of the most unfit men I know of for the place. He has had very little respect for laws or constitutions, and is, in fact, an able military chief. His passions are terrible. He has been much tried since I knew him, but he is a dangerous man.

During the 1828 Presidential campaign Jackson's opponents took to calling him jackass. Being the bad-ass he was Jackson liked the idea, and used it as his own for a while. Years later the donkey was adopted as the symbol of the Democratic Party.

This short guide will tell you all you need to know to understand the Jacksonian Era in America... even if you know absolutely nothing about the South Carolina Nullifiers, the National Bank Crisis, or Indian Removal.

In less than an hour, you'll learn all you need to know to impress your friends about Andrew Jackson, the Battle of New Orleans, the Creek and Seminole Indian Wars, and more.

What listeners say about Andrew Jackson: A Brief History of Old Hickory