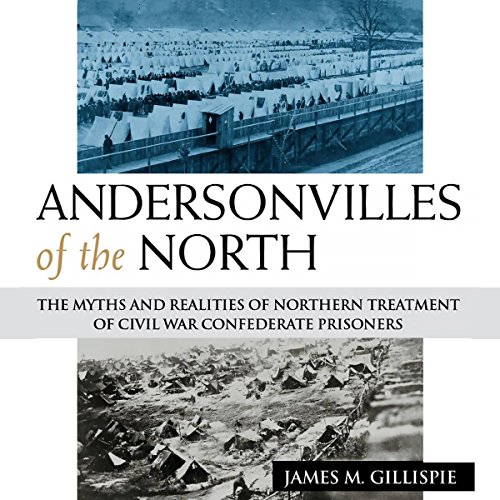 Andersonvilles of the North, by James M. Gillispie, represents the first broad study to argue that the image of Union prison officials as negligent and cruel to Confederate prisoners is severely flawed. This study is not an attempt to "whitewash" Union prison policies or make light of Confederate prisoner mortality. But once the careful listener disregards unreliable postwar polemics, and focuses exclusively on the more reliable wartime records and documents from both Northern and Southern sources, then a much different, less negative, picture of Northern prison life emerges. While life in Northern prisons was difficult and potentially deadly, no evidence exists of a conspiracy to neglect or mistreat Southern captives. Confederate prisoners' suffering and death were due to a number of factors, but it would seem that Yankee apathy and malice were rarely among them. In fact, likely the most significant single factor in Confederate (and all) prisoner mortality during the Civil War was the halting of the prisoner exchange cartel in the late spring of 1863. Though Northern officials have long been condemned for coldly calculating that doing so aided their war effort, the evidence convincingly suggests that the South's staunch refusal to exchange black Union prisoners was actually the key sticking point in negotiations to resume exchanges from mid-1863 to 1865.

" Andersonvilles of the North is an outstanding work of Civil War history." (Steven E. Woodworth, author of Jefferson Davis and His Generals)
"Will become a major work in the field of Civil War prisons for years to come." ( Journal of Illinois History)
"An important addition to our understanding of the prisoner-of-war issue." ( North Carolina Historical Review)

What listeners say about Andersonvilles of the North