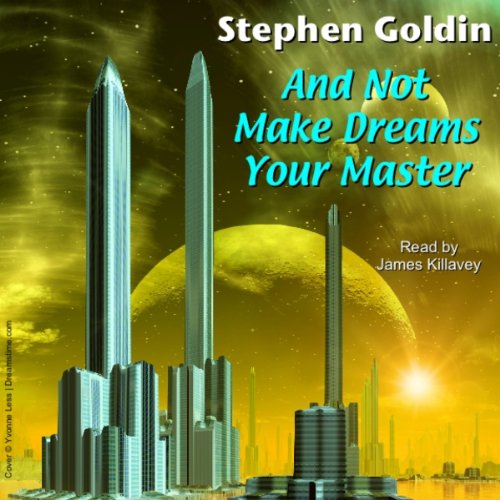 And Not Make Dreams Your Master

And Not Make Dreams Your Master

In the near future, dream broadcasting has become the latest entertainment medium. Wearing a Dreamcap while you sleep enables broadcasters to send dreams directly into your unconscious mind, giving you an entertainment experience as intensely real as though you'd been there yourself.

Wayne Corrigan is a performer at Dramatic Dreams, one of the smaller broadcast studios in the Los Angeles area. Janet Meyers, the lady Wayne's in love with but is too shy to tell her, is another. A third colleague is Vince Rondel, a genius of the art, a so-called Master Dreamer with enough imagination to create and populate entire worlds within their minds and project them to the audience. Vince is the superstar of the studio, though he doesn't seem pretentious about it. He does have other problems, though, like a domineering mother who's a religious zealot.

When a mysterious malfunction occurs, Wayne is called on to enter a dream started by Vince. Once inside, he finds a situation run wild and people enslaved by Vince, who seems bent on self-destruction. Now, tens of thousands of people - including Janet, who's in the audience that night - are in danger of dying or going insane unless Wayne can find some way to wrest control of the Dream away from Vince.

And Not Make Dreams Your Master is a wild, inventive ride through the nightmare mind of a madman.

Main guy...can't remember his name now. I heard this a while ago.

Have you listened to any of James Robert Killavey’s other performances before? How does this one compare?

Did his usual good job.