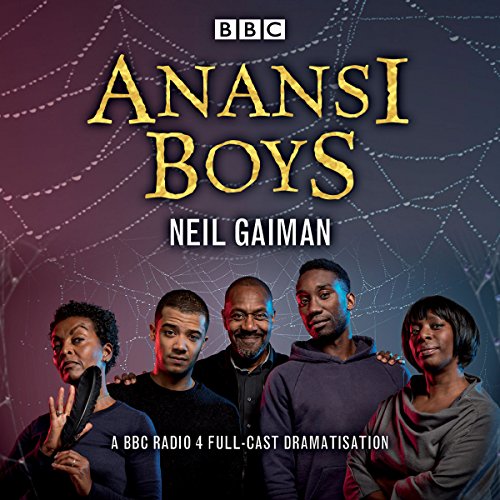 When his father dies, Fat Charlie Nancy discovers that not only was the late Mr Nancy actually the god Anansi, but he also has a long-lost brother, Spider, who is everything Fat Charlie is not. When Spider begins to take over Fat Charlie's life, his flat and even his fiancée, Rosie, Fat Charlie is forced to make a pact that lands him in trouble with the gods themselves....

Anansi Boys is a story of love, laughter, music and murder, old gods and new tricks that takes Fat Charlie from his home in South London to Florida, the Caribbean, and the very Beginning of the World itself. Or the End of the World. Depending on which direction you're coming from.

Jacob Anderson stars as Charlie, and he has written and performed a specially commissioned song - 'Charlie's Song' - which forms part of the magical fabric of Anansi Boys.

What listeners say about Anansi Boys

slow to start but well worth it

The characters are very well cast and it's a solid adaptation of the novel. The first couple of episodes are a bit turgid, but Bird is *terrifying* and it comes to a satisfying conclusion. I particularly liked the voices for Rose, Daisy, and Mrs Noah.

Fabulous. If you have previously enjoyed a Neil Gaiman story which combined myth + reality click that 'buy' button.

Cast, story and sound design are all spot on. Already listened to this twice and would recommend doing this as you'll pick up elements of the story you may have missed during the first listen.

And if you enjoy this take a look at other Neil Gaiman stories dramatised by the BBC: Good Omens, Neverwhere, How the Marquis Got His Coat Back, and Stardust.

The performances in this story are stellar and hold up very well as can be expecting for a Dirk Maggs adaptation of a Neil Gaiman story, and this is one of the few fantasy stories with a majority of its main characters being black and driving the plot.
My objections come purely from my personal dislike against the story’s use trope of the unrepentant trickster who weasels his way out of trouble and refuses to fully acknowledge or apologise for his actions. This manifests in one main character in Spider, who appears in Charlie’s life after his father dies and proceeds to wreak havoc, disguising himself as him and stealing his fiancé. The whole plot revolves around Spider escaping or being saved from his just punishment for being a trickster with the help of the brother whose life he effectively ruined. The story is well rounded and the theme of the hero stepping up to meet his expected role and atone for a mistake made long ago is told well through the increasingly baffled and bemused Charlie Nansi, played flawlessly by Game of Thrones’s Grey Worm Jacob Anderson. When the father appears, he plays his role as a mystic instructor, but doesn’t apologise for his actions. For me who gets easily frustrated, Spider and his father who behave like scoundrels were the obstacles for making this a fully enjoyable tale.
Download this if you love Neil Gaiman, Compe Anansi and his mythology, and American Gods for the enchanting fresh urban take on West African and Caribbean Mythology about magical godly animals and the song that created the world. Don’t download this if you viciously dislike unapologetic scoundrels not getting their just deserts, weaselly bosses and fiancé stealing tricksters

quality production from the BBC, of an excellent and entertaining story. well be replaying it often.

I loved the performances which were very entertaining and made the most of the script. This spin off from American Gods was amusing and I enjoyed it but often I felt it was aimed at a young audience.

This was an utter delight from beginning to the end. Wonderful cast and wonderful story. Thank you Dirk Maggs.

Another Gaiman and Maggs masterpiece

I enjoyed every moment of this. another fantastic adaptation by Dirk Maggs of a Neil Gaiman story. I think I have enjoyed every Dirk Maggs productions I have had the pleasure of listening to.
Pros: Great voice acting, great sound effects, fantastic story, great character development
Cons: After it ended I wanted there to be another installment

THIS PRODUCTION WAS O.K. BUT I DO NOT THINK THAT IT IS THE BEST BBC ADAPTATION OF GAIMANS WORK. GOOD OMENS IS INFINATELY BETTER. BUT DONT LET ME PUT YOU OFF.

An excellent dramatisation of a beautiful story

Great book brought to life by a great cast. I first heard it when it was serialised on Radio 4 extra, usually try to catch it when it is played and now I can listen to it whenever I want. Worth a listen.

I loved this story and the performance and did not want it to end today.

One of the best on audible

The title says all you need to know. trust me you will not be disappointed

This is my first of 150 purchases I have to send back. I just connot interpret the heavily accented reading. The sample I listend to was 'moderate' in the West Indies accent...but it progressivly got worse to the point I cannot follow.