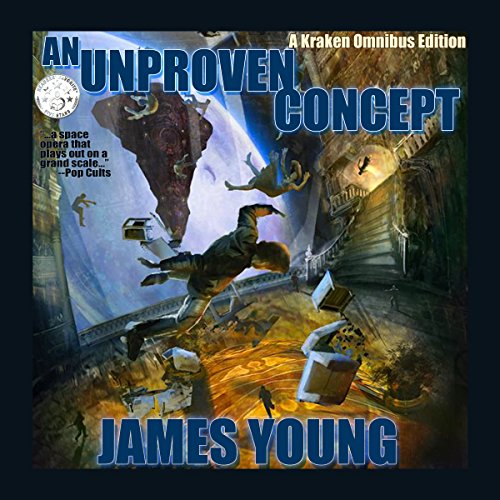 By: James Young
Narrated by: Michael Icenogle,Nicole Margulis
Try for $0.00

"There are lots of ways to make history. Sometimes one's purpose in life is to serve as an example of utter folly...."

The Confederation of Man has overseen the prosperous expansion of humanity for almost eight centuries, with the Confederation Fleet its shield against all enemies both internal and external. Despite its numerous successes, the Fleet is a shield that is becoming warped by the schism between its Carrier and Line factions. In the year 3050, Fleet Admiral Malinverni has overseen the design and commissioning of a vessel intended to merge the best of both factions: the battlecruiser Constitution. Intended as a harbinger of a better future, the Constitution is considered a flawed concept by all except her crew. If either Fleet faction has its way, neither the Constitution nor her captain, Mackenzie Bolan, will ever get a chance to prove their naysayers incorrect.

The starliner Titanic is considered to be the epitome of her type. With a handpicked crew, the Titanic is expected to see to passengers' every need and whim, be it a rare artifact of opulence or stringent, discreet security. Unfortunately Captain Abraham Herrod, her master, is confronted with the growing likelihood that his vessel may soon be rendered obsolete by the ever-pressing march of technology. Pushed by his superiors, Captain Herrod must decide just how far he's willing to go in an attempt to prolong the "Golden Age of Starliners".

What listeners say about An Unproven Concept - Kraken Edition

Although this is a tried and tested genre, the author manages to come up with something original and fun to listen to. It would seem Mr young has some significant experience in the military and this clearly bleeds over in to the way he deals with his characters and makes them believable. Another aspect of this sort of book is making the universe that it is set in consistent - this is done really well yet doesn't dwell overmuch on how the technology actually works which I always find distracting.
Anyone buying this book should also note how long it is and so what good value it represents.
Mind you calling a Space Liner 'Titanic' was asking for trouble from the start!

This was a good listen and will probably be enjoyed by most space science fiction fans. There was a lot of action including space battles, boardings, and alien encounters. All-in-all I would say that it was good but had a few drawbacks that, while noticeable, didn't take too much from the overall book.

There are several parallel stories which include an advanced new warship in final testing and a new luxury liner carrying hundreds of VIPs. The luxury ship is attacked by aliens and the story progresses from there.
While the story was still engaging, the fact that I started with this book and not book 1 in the series was to my disadvantage. Though I eventually pieced together a lot of the backstory, I was lost at a few points in the book as far as some of the characters and their relationships were concerned.
Also, while not completely unrealistic, the aliens were given the most stereotypical appearance and description I could possibly think of...

I give the narration a 7/10, but I didn't like some of the female voices were a little annoying.

I received a free copy of this audiobook from the author, publisher, or narrator in exchange for an unbiased review. I was NOT required to write a positive review and this reflects my honest opinion of the work.

Where does An Unproven Concept - Kraken Edition rank among all the audiobooks you’ve listened to so far?

It was excellent. Brilliant science fiction with a mix of political and military shenanigans, great pace and overall an excellent story.

I loved all the main characters. They are all well written and feel real, with their own strengths faults and foibles. I'd hate to pick out one as they are well written and it's such a roller coaster of a story that you jump in and enjoy the ride.

The holographic farewell. I'd hate to spoil anything so I will leave it at that.

Yes. It was too long for my car journey to listen to in in one sitting. I started it whilst driving but I soon polished it off as soon as I could get back to it!!