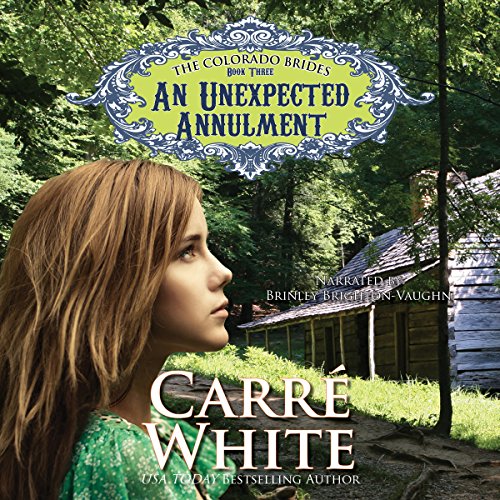 By: Carré White
Narrated by: Brinley Brighton-Vaughn
Try for $0.00

Louisa Hoffman has just endured a humiliating annulment, which has left her bitter and determined never to marry again. Having tarnished her reputation in New York, she flees to the Colorado Territory to live with her sisters, Hannah and Paulina, who have happily married and settled.

Determined to teach in Denver City, she is ready to live her dream, but the distracting children of a neighbor have caught her attention. A little girl by the name of Annie and her two brothers have been running amok, feral and starving, as their father has taken to the bottle in his grief over his departed wife. Not being able to mind her own business, Louisa secretly feeds the children, growing closer to them by the day. When their father, Matthias Montgomery, is struck in the head by a wooden beam, she takes over his house, nursing the rugged miner back to health.

Through loss and disappointment, Louisa realizes that God might have something else planned for her, although she fights the attraction she feels for Matthias, determined never to trust a man again. However, she underestimates the charm of the Montgomery children, especially Annie, who tugs at her heartstrings. Louisa's far more entrenched in their lives than she could have imagined...and living without them is quickly becoming unthinkable.

This is the third book in The Colorado Brides series, chronicling the lives of the Hoffman sisters and their adventures in finding love out west.

What listeners say about An Unexpected Annulment

she didnt develop the character of Matthias at all

it was a wonderful story overall but it was like Matthias just fell in love with her because she was the kind of woman he and his children needed. it was no kind of love story at all because it was like the love was just instantly there they didn't fall into it. overall it was a good story though, narrator is a fantastic job on the children's voices.