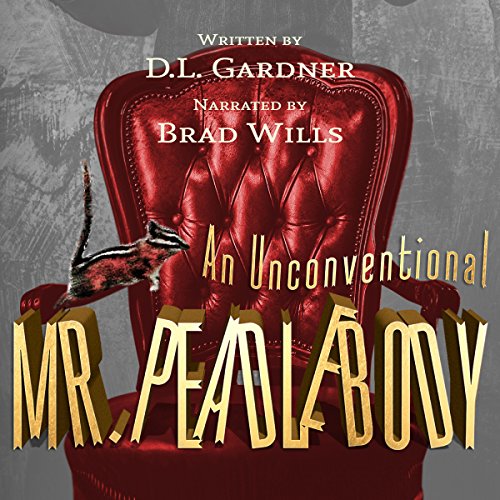 While fleeing a flood in Mississippi, Rockford Peadlebody dies in a train wreck.

His brother Gerald, his wife Ginger, and son Raymond (a rather dysfunctional lot of half-blood vampires) reach grandpa's estate in Ohio and are surprised that granddaddy Benjamin Peadlebody has also died. They are now heirs to the infamous Peadlebody manor and all its peculiarities including the butler, a reserved, tattooed muscle-man named Richard Cottlebone.

It seems fishy to Gerald that two untimely deaths in the family happened within a week. Yes, Rockford's demise was of his own doing, but Benjamin's? Perhaps the butler knows more than he's letting on?

To prove himself worthy, since he failed to live up to his father's standards while the old vampire was alive, Gerald goes about to unravel the thread of Papa's death. No help comes from Ginger. She's too busy trying to un-vampire herself. And Raymond is in love, but not with his relatives. Gerald soon discovers solving a murder mystery meets with a stone-cold reception.

What listeners say about An Unconventional Mr. Peadlebody

This audiobook is light and fun book and imaginative. I found myself drawn into the story as the characters, each with their own quirks and eccentricities, make their way through their journeys in this novel.

the story is quite good I enjoyed it very much.
the narrator made an incredible job .

D.L. Gardner weaves an addictive story that fires the imagination and immerses you deeply into the world of the Peadlebody’s. You quickly become invested in the intriguing characters and find you can’t put the book down! I HIGHLY recommend this book.

I received a copy of An Unconventional Mr. Peadlebody for an honest review. I hesitate to give an audiobook a 4 or 5 star rating unless it is really above average. I have no doubt that this book deserves a 5 star rating. Both the author, D.L. Gardner, and the reader, Brad Wills, created a wonderful story, and I will listen to it repeatedly. The story was very engaging. I hoped to listen to it over a few days, but the story flowed so well that l played it without pause, and only regret that it is over. The ending was very satisfying, and left no loose ends. Surprisingly for a vampire story, it was refreshingly different from any vampire story I've read or seen.

The story was very well written. Often I was impressed by how well the author described the scenes, not just the details, but how nicely they were described. Wonderful word choices abound. The characters all have different and very believable personalities. The reader, Brad Wills, does a fantastic job of infusing these personalities into their dialogues. Not only do the characters have distinct voices, but the way each talks shapes a mental picture of what the character is like. The readers pacing is also very good. In short both author and reader deliver a fantastic job with this audiobook.

The narrator did an exceptional job with the voices, except for overplaying the southern character.The story itself was light and entertaining. The characters were varied and interesting. The plot was good and kept moving, never getting bogged down. Definitely worth listening to.

This was a fantastic and fun story. Brad Wills has so many difficult voices, you know exactly who is speaking. He made the tale come alive. I loved it!

This crazy bunch certainly needs another adventure...and read by the same narrator as well.

I received this book for an honest review.
I was pleasantly surprised at the refreshing and unconventional 😉 storyline of this book. I love all vampire novels and this one really blew me away. Definitely a different take on the whole vampire scene, which is very nice to see. The writer really opened up a light and slightly comedic world of vampires, elves and gorgons, which sucked me in. I personally loved the tenacious search for a cure of vampirism that one of the characters labors throughout the story. The twist of how the curse may be broken is both sweet and delightfully unique. The silliness and hilarious absurdities are abundant and much appreciated in this cute story of the world beyond mortals.
The reader Brad Willis is absolutely amazing and really made the whole story pop and sizzle. It was like there was an entire cast of characters, he really brought them all to life with his amazing voice work.

"An Unconventional Mr. Peadlebody" is an unconventional story with a slightly different take on the world beyond humanity, wonderfully narrated by Brad Wills with voices both British and American, male and female, southern and midwestern. And funny, with delightful absurdities and paradoxes as two of the characters try to find a cure for vampirism and a third tries to find out what happened to his father. The murder mystery is pretty unconventional, too, although I did figure out portions of it as the twists kept kinking things and different threads snaked through. Delightful! [Note: If you reread this review after listening to or reading the story you will find some Easter Eggs.]

A Different and humorous take on vampires

This was an interesting little gem. We have a family of half blood vampires who are closer to human, but still drink blood to survive. Raymond’s vampire father has been killedin a train wreck. His grandfather, a full-blood vampire, has also recently died under mysterious circumstances. Uncle Gerald, an inept half blood vampire in almost every way, has inherited his father’s estate. He moves in to the old house, and Raymond’s mother, Ginger, moves into a tree house on the estate. Raymond wants desperately to be human so he can marry the girl of his dreams. Ginger is working on potions to try to make that happen. And Gerald learns that many old people in the town have died mysteriously and extremely realistic statues suddenly appear as an added enticement from a strange realtor trying to sell the properties. And now the realtor wants Gerald’s estate.

While not everything about half blood vampires is explained, the characters were fun and the story was too. Making it all worthwhile is Brad Wills wonderful narration. Great voices for each character and a slight Britishness to the narration just added to the humor making this a fun listen.