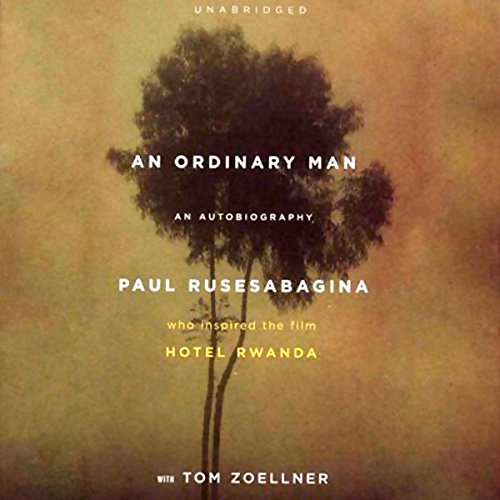 By: Paul Rusesabagina,Tom Zoellner
Narrated by: Dominic Hoffman
Try for $0.00

As his country was being torn apart by violence during the Rwandan genocide of 1994, hotel manager Paul Rusesabagina, the "Oskar Schindler of Africa", refused to bow to the madness that surrounded him. Confronting killers with a combination of diplomacy, flattery, and deception, he offered shelter to more than 12,000 members of the Tutsi clan and Hutu moderates, while homicidal mobs raged outside with machetes.

An Ordinary Man explores what the Academy Award-nominated film Hotel Rwanda could not: the inner life of the man who became one of the most prominent public faces of that terrible conflict. Rusesabagina tells for the first time the full story of his life, growing up as the son of a rural farmer, the child of a mixed marriage, his extraordinary career path which led him to become the first Rwandan manager of the Belgian-owned Hotel Milles Collines, all of which contributed to his heroic actions in the face of such horror. He will also bring the listener inside the hotel for those 100 terrible days depicted in the film, relating the anguish of those who watched as their loved ones were hacked to pieces and the betrayal that he felt as a result of the UN's refusal to help at this time of crisis.

Including never-before-reported details of the Rwandan genocide, An Ordinary Man is sure to become a classic of tolerance literature, joining such books as Thomas Keneally's Schindler's List, Nelson Mandela's Long Walk to Freedom, and Elie Wiesel's Night. Paul Rusesabagina's autobiography is the story of one man who did not let fear get the better of him, a man who found within himself a vast reserve of courage and bravery, and showed the world how one "ordinary man" can become a hero.

"Now, thankfully, we have not just his words but a whole book." (Library Journal)

What listeners say about An Ordinary Man

Not An Ordinary Memoir

I just finished listening to "An Ordinary Man." It was an unbelievably poignant autobiography of the man that ran the hotel that the movie "Hotel Rwanda" was based on. It is not an easy listen. "Man's inhumanity to man" is really hard to believe. But, it is very well done and captivated me. I highly recommend this to anyone who is interested in hearing the behind the news media sound bite story of the genocide in Rwanda and how one man made a difference.

Lessons in leadership, and humility

By the time I was halfway through Paul Russesabagina's An Ordinary Man, I knew two things. 1. The Movie Hotel Rwanda tells a tiny fraction of his story, and 2. I have never done anything hard in my life.

Russabagina's 100 days in the Spring of 1994, when he cared for his Family and over 1200 refugees and employees during the Rwandan genocide, may be the single greatest leadership event of the 20th century. Students of leadership will certainly balk at that comment, but not after they read this compelling autobiography. I thought that I was reading an account of one mans experience, but I found myself taking notes on life, leadership, communication, and the complexities of good and evil from a master teacher. Have a pen and paper nearby before you dig into this one.

With much of the book dedicated to his life before and after the genocide, his insights to life make it obvious that Russesabagina would be an extraordinary soul even if he hadn't been through the horror that was Rwanda in those days.

Another book has been added to the "Must Read" list.

Amazing story of personal commitment, passion of the human spirit, desire to live, and phenomenal negotiation skills in the face of genocide. Recommend to all!

Having worked in a Rwandan mission hospital with many who are survivors of this terrible event, this book is an incredible account of the happenings particularly in and around Kigali. It also gives an historical account of the events leading up to the clash between the Hutu and Tutsi tribes. Courage, savvy and a cool demeanor enable one man to save many. For another view, those interested in this event are also encouraged to read Romeo Dallaire's "Shake Hands with the Devil."

AnOrdinary Man: Rawanda from an Insider

I was very intrigued by this book. The author was the Hospitality Manager, who protected more than 1200 people in a hotel that was made to accommodate 300, for the whole time of slaughter in Rwanda. I have heard this told from several view points. This is his story, in his own words. He doesn’t claim any courage or special talent. He showed how the skills he had developed as a manager and how the people skills he had developed as a man of his culture helped him accomplish this miracle. I was amazed how much work and negotiating it entailed to keep these people safe for such a long time. The "hollywood" movie version didn't begin to tell the details. I was also very interested in how his culture gave him a total different outlook on how to work with other people. I really respect this man and can see how I could gain from his experiences and apply his values to my own life. If you really want to see a man who did everything he could to save as many as he could during this time of slaughter - this is the man you should hear tell the story.

I loved this book about an extraordinary man

I saw the movie and loved it so I wanted to read the book too. It did not disappoint. The audio book gave the extra details about the story and expecially the man that rounded out the experience. Paul is an extraordinary man and this is a great book.

What did you love best about An Ordinary Man?

I loved Paul's compassion despite his fear and horror as to what was happening to his beloved country, friend, family and neighbors.

Have you listened to any of Dominic Hoffman’s other performances before? How does this one compare?

This was my first. I liked his performace

What made the experience of listening to An Ordinary Man the most enjoyable?

Powerful story, extremely well read (you can easily picture the reader as the author).

Demonstrates the impact that just one individual can have when standing against a powerful tide.

I learned so much!!

Where does An Ordinary Man rank among all the audiobooks you’ve listened to so far?

I really enjoyed this book! I learned so much more than what I saw in the movie. I learned everything about a man's clever ways to keep so many people alive. I am glad to have listened to this book. Very inspirational story!!

This book sets forth the most complete first hand story of the Rwandan genocide that I have seen. The genocide began when a missile shot down the Hutu president's plane, killing all aboard. It is clear from the book, however, that the seeds of the genocide had already been sown before that by government propaganda and earlier violent battles for power between Hutus and Tutsis in Rwanda and in neighboring Burundi. The book shows how fragile was Paul Rusesabagina's position at the Hotel Rwanda. His personal story was one of guile and gumption that managed to save his own and 1,200 other lives that sought refuge in the Hotel.

He makes a convincing case that the genocide arose from an intentional policy of the government to instill fear and hate in the Hutu majority against the formerly dominant Tutsis (through radio station propaganda and the organization of poorly disciplined militias composed of young men crammed into refugee camps) in order to maintain power. One forgets that in neighboring Burundi the Hutus had earlier been victims of mass killings encouraged by governing Tutsis, and a formidible Tutsi rebel army had already entered Rwanda. Still, it is horrifying to read of savage, merciless murders of innocent Tutsis (of all ages, sexes, and conditions) that seemed to be carried out as a patriotic mission by crowds of Hutus, who had formerly had cordial relations with their Tutsi neighbors. The final tally was 800,000 dead in 100 days. The terrible consequences of fear, vicious propaganda, thinking about others in stereotypes, and the dynamics of "groupthink" are well worth pondering for all of us.