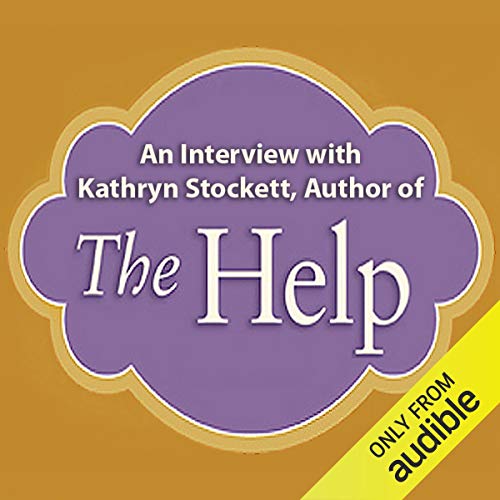 Kathryn Stockett is the best-selling author of The Help, Audible's 2009 pick for Audiobook of the Year. In this interview she tells us about her role in choosing the book's narrator, and reveals what she's working on next.

Three ordinary women are about to take one extraordinary step. Twenty-two-year-old Skeeter has just returned home after graduating from Ole Miss. She may have a degree, but it is 1962, Mississippi, and her mother will not be happy till Skeeter has a ring on her finger. Skeeter would normally find solace with her beloved maid, Constantine, the woman who raised her, but Constantine has disappeared, and no one will tell Skeeter where she has gone.

Aibileen is a black maid, a wise, regal woman raising her 17th white child. Something has shifted inside her after the loss of her own son, who died while his bosses looked the other way. She is devoted to the little girl she looks after, though she knows both their hearts may be broken.

Minny, Aibileen's best friend, is short, fat, and perhaps the sassiest woman in Mississippi. She can cook like nobody's business, but she can't mind her tongue, so she's lost yet another job. Minny finally finds a position working for someone too new to town to know her reputation. But her new boss has secrets of her own.

Seemingly as different from one another as can be, these women will nonetheless come together for a clandestine project that will put them all at risk. And why? Because they are suffocating within the lines that define their town and their times. And sometimes lines are made to be crossed.

In pitch-perfect voices, Kathryn Stockett creates three extraordinary women whose determination to start a movement of their own forever changes a town, and the way women - mothers, daughters, caregivers, friends - view one another.

What listeners say about An Interview with Kathryn Stockett, Author of 'The Help'

Worth a Quick Listen

Her background in Mississippi

Would you recommend An Interview with Kathryn Stockett, Author of 'The Help' to your friends? Why or why not?

If you like The Help, I think this is worth hearing.

Her talking about her own maid.

Did An Interview with Kathryn Stockett, Author of 'The Help' inspire you to do anything?

I loved The Help! I listened to this after I finished "The Help" because I wanted a little more of Kathryn Stockett's own story. Really, she is so sweet and genuine.
It is a joy hearing her talk about the making of The Help. However, this was an interview audio and I don't know that I would listen to more than a short piece of an interview on a single book or movie.

The interview covers some back story about the voice talent on the audio book and some news on the movie and such.

If you’ve listened to books by Kathryn Stockett before, how does this one compare?

not the interview, unless it was added to the 'end' of the movie - like how a movie came to be sort of thing.

What made the experience of listening to An Interview with Kathryn Stockett, Author of 'The Help' the most enjoyable?

this was a nice bonus. thanks audible for making this free, i appreciated the extra insight into the audiobook.

Would you recommend An Interview with Kathryn Stockett, Author of 'The Help' to your friends? Why or why not?

if you've listened to the audiobook The Help, do pick this up!

well, there already is an oscar winning film from the

thanks audible! this is a nice free gift & provided some nice background.

good listen if you enjoyed the help

Actors were amazing. "The Help" must be read on audible to have the best read possible. I started to read the book and then quickly switched to audible to get the voices right. This book was unusual in that each major character had their own voice in the story, and those "voices" were brought to the reader by three separate actors.

What made the experience of listening to An Interview with Kathryn Stockett, Author of 'The Help' the most enjoyable?

I have not read or listened to the book -- but the interview made me want to read the book now that I've watched the movie and just loved it 2 times in a row.

Was very interesting. Loved the story so was nice to here about her inspiration.

I was very apprehensive at first but really enjoyed this book! Glad I gave in to my curiosity.

A short visit with Genious and Gentility

This was a delightful addition to the recently read (and loved) book "The Help". Kathryn Stockett is kind enough to sit with us a while and discuss her writing and even her current project. It was delightful bliss.

This interview inspired me to read the book.

I listened to this interview on a whim. I generally ignore fiction best-sellers, and so had not even considered reading The Help. But I found the interview so intriguing that I then read the book. Incredible! It might be time to reconsider my policy of disregarding best-sellers...