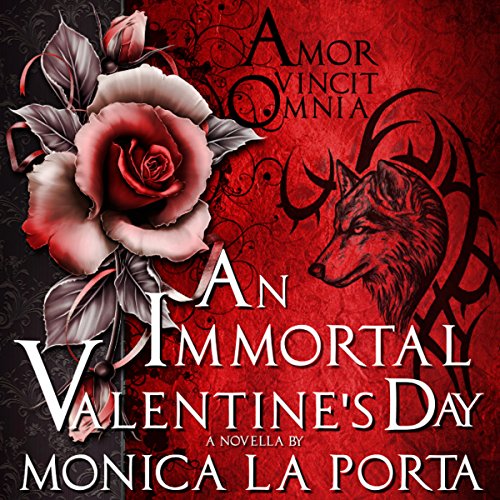 Once a playboy, Alexander Drako is now the happy father of three and eager to celebrate Valentine's Day with a special party held on Friday night to accommodate his nocturnal vampire friends. Everything is ready except for a small detail. Alexander has forgotten to buy the roses and orchids for his beloved Ravenna. Unable to disappoint her, and accompanied by his loyal friends, Marcus and Samuel, he sets out for Wolf's Haven, a rehab center for paranormals, hoping to find some flowers left for sale in their greenhouse.

After a honeymoon around the world that lasted half a year, Peter and Ophelia have just landed back in Rome. While he would like to relax in their apartment, Ophelia is eager to see her friends. Most of all she can't wait to hug Quintilius, her adoptive father.

Ophelia's call reaches Quintilius at Wolf's Haven, where he's volunteering, and he rejoices at finally seeing her again. However he isn't thrilled to see Peter, the man who stole the heart of his little princess. A sudden crisis at the rehab center forces Quintilius to focus his thoughts and energies on looking for Luisa, a girl who's run away with a dangerous gang member.

By fate's design, all the friends have reunited at Wolf's Haven and agreed to help Quintilius in his quest. Will they be able to save the girl and return to their loved ones in time to celebrate Valentine's Day?

What listeners say about An Immortal Valentine's Day

Love this series and great characters!

Would you consider the audio edition of An Immortal Valentine's Day to be better than the print version?

I actually prefer print versions of this series, the narrator for me didn't change his voice enough considering a large part of this novella was all male characters in many of the scenes.

I love paranormal fiction and this has many elements I like, werewolves, demons, fallen angels, vampires, sorcerers, secret cities, this one has it all.

What about Edo De Angelis’s performance did you like?

He did put feeling into the characters and made the secret city under the human city come to life.

This did make me laugh, wry observations and playboys turned daddies do that.

I received this for a honest review. The author did a good job writing the book and the narrator was great as well.

This book has a little of everything from angles, shifters, vampires, warlocks, and demons. A group of friends will have to come together to find a missing girl and her boyfriend. They find that the young couple might be in some serious danger. Can they get to them in time?

This is a book about Valentines day. So the men are having to make sure their women are happy. Those theses men are different as far as their abilities and what they are but the one thing they have in common is they love they have for their mates. They also love their kids.