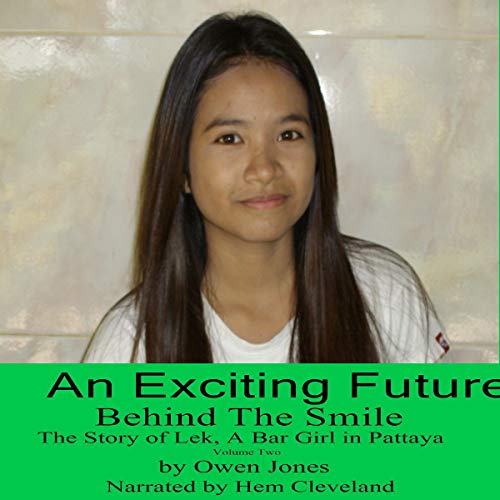 An Exciting Future: The Story of Lek, a Bar Girl in Pattaya

By: Owen Jones
Narrated by: Hem Cleveland
Free with a 30-day trial

Lek, the eldest child in a typical rice-farming family, did not hope for anything more than the other girls in her village: work in the fields for a few years; have a few babies; let mum take care of them and go back to work until they had their own children and it was her turn to take care of them.

Suddenly, her father died with debts that the family knew nothing about. Lek was 20 and the only one who could prevent foreclosure. However, the only way she knew was to work in a bar in Pattaya.

She went as a waitress, but when she became pregnant, things had to change. She had the baby, gave it to her mother, and went back to work. However, needing more money now, she drifted into the sex industry.

One day, she meets a man she likes and he likes her too. Nothing new there, but she feels that it is different this time. They have a wonderful holiday and then he goes home - as they all had, leaving more promises and more hopes. This one returns, but real life with a real boyfriend is not as easy as she had dreamed it would be.

After all she has been through, can she be a normal girlfriend or wife again? Could she ever trust a man enough? Or would she be better off giving up her dreams and just working in the bar?

Lek begins to learn that getting what you want is not always all you hoped for.

This second book in the trilogy called An Exciting Future: The Story of Lek, a Bar Girl in Pattaya explores the characteristics needed by returning Thais and foreigners if they want to live in an isolated Thai village, where there are none of the trappings of city life.

They move back to the village to be with Lek’s daughter, other family and old friends, but the villagers are not all as excited about Lek moving back as she is, although the only two who really matter, Soom and her mother are delighted.

Craig is also happy to live in the village, although it is not at all easy for him as no-one there speaks English and the Internet does not work as well as he was led to believe. Will he be able to make ends meet? Will he be deported? And would Britain allow Lek in if he had no money?

Will Lek and Craig manage to live in the village of Baan Suay or will the loneliness, the tedium and the lack of stimulation drive them away or even apart?

"Behind the Smile" refers to the fact that Thailand is known the world over as "The Land of Smiles".

What listeners say about An Exciting Future: The Story of Lek, a Bar Girl in Pattaya

Conclusion to the Story

I was given this free review copy audio-book at my request and have voluntarily left this review. This review is for the audio copy of An Exciting Future: The Story of Lek, a Bar Girl in Pattaya - Behind the Smile, Volume Two by Owen Jones and narrated by Hem Cleveland. The story continues to its conclusion with the same insightfulness as book 1. The narrator made it seem as if you were there. I liked the books for the picture it gave me into a different culture.

Both Owens books made me feel like I was back in Thailand- interesting insight on a Bar girls life and a Farang point of view. I look forward to the 3rd one!