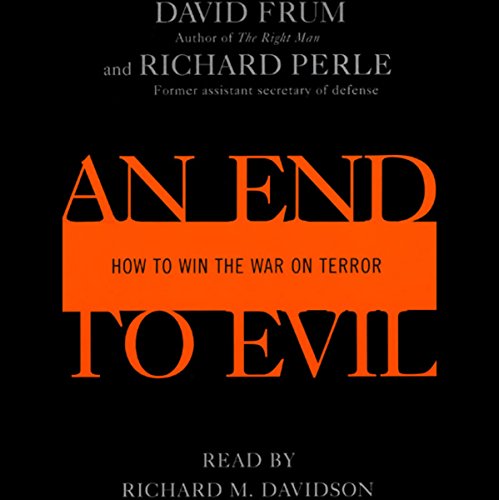 An End to Evil

This world is an unsafe place for Americans, and the U.S. government remains unready to defend its people. In An End to Evil David Frum and Richard Perle sound the alert about the dangers around us: the continuing threat from terrorism, the crisis with North Korea, the aggressive ambitions of China. Frum and Perle provide a detailed, candid account of America's vulnerabilities: a military whose leaders resist change, intelligence agencies mired in bureaucracy, diplomats who put friendly relations with their foreign colleagues ahead of the nation's interests. Perle and Frum lay out a bold program to defend America, and to win the war on terror.

Among the topics this audiobook addresses:

An End to Evil will define the conservative point of view on foreign policy for a new generation, and shape the agenda for the 2004 presidential election year and beyond. With a keen insider's perspective on how our leaders are confronting, or not confronting, the war on terrorism, David Frum and Richard Perle make a convincing argument for why the toughest line is the safest line.

David Frum, a former special assistant to President George W. Bush, is a resident fellow at the American Enterprise Institute and a contributing editor of National Review.

Richard Perle served as an assistant secretary of defense in the Reagan administration and as chairman of the Defense Policy Board under President George W. Bush. He is a resident fellow at the American Enterprise Institute.

"A highly charged domestic and foreign policy manifesto for dealing with the terrorist threat....This is a comprehensive, no-nonsense primer on the conservative approach to handling the terrorist threat." (Publishers Weekly)
"It is now possible to describe a neoconservative foreign policy, and David Frum and Richard Perle's new book...is a useful guide to it....Intelligent and worthwhile." (The New York Times Book Review)

What listeners say about An End to Evil

An End to Evil

I bought and enjoyed this audiobook from Audible. It does not mince words. This book is a straightforward attack on Islamists (as Daniel Pipes uses this word) and the support Islamism receives from various quarters. It identifies Islamist fanaticism with "evil". Richard Perle is well known. David Frum is the Canadian who formerly worked in the Bush White House as a speechwriter and apparently developed the popular epithet -- axis of evil. Frum was interviewed by Terri Gross on Fresh Air (also available from Audible) after he left the White House. If you were incensed by 9/11 and if you believe Islamists will never allow the West to live free from fear, then you should buy this book. If you think the world is complicated and we should continue using the United Nations to solve our problems, then try shopping for books by Al Franken or Michael Moore. In any event, thanks to Audible for giving some shelf space to conservative audiobooks.

I think it's critically important to listen points of view that challenge your own belief system, although it can be a painful exercise. But before you listen to this, I would listen to Noam Chomsky's latest. This supplies valuable information (i.e. what is the definition of terrorism) that adds the context to truly question every argument these two make.

As I imagined, this was, indeed, painful. This book is chilling. Not because there is "evil" in the world, but because these guys command the ear and (in Frum's case) move the mouth of our President, who I suspect is going to be President until 2008. This is why I consider this "essential" reading/listening.

Listen to this book if you want the ability to see our country's future. You'll understand what is happening with our increasingly hostile relationship with Syria. You'll laugh when you see Perle's "visionary" Chalabi step on both of their *****. You'll get a sense of where we are going with North Korea. Those damn, gutless South Koreans not willing to take a few tens of thousands of innocent deaths in order to put an end to the "evil" of North Korea. Boycott Kim Chi.

The narration is excellent. I gave an additional star to the narrator who lent the perfect Orson Wellian dramatic flair to this narrative cartoon. I had to keep looking in my rear-view mirror to make sure that an Islamic terrorist was not hiding in the back seat waiting to kill me and drive my car full of over-priced gas into the nearest Wal-Mart.

Weak-kneed co-conspirators like Colin Powell, Rich Armitage, Scrowcroft and Bush 41 add the only sense of surprise. Clinton-bashing is predictable and plentiful. No mention made of how Osama and Saddam are the bastard "children" of the United States and it's need to dip it's missle into the hot spots of the world.

It puts into words what many of us have been wondering about the new forces in the world. It is a shame to see the denials probably because it touches some nerves that are still raw. It is not a book for those that want to continue to keep their heads in the SAND.

Wake up America, you are under attack, outside and within.

The venom spews forth nonstop. If it wasn't so chilling, given the author's continuing influence in our government, it would be laughable. Of particular note is the author's hostility towards Saudia Arabia and those Americans that consort with its leadership - Never once did the authors mention the intimate, long term and continuing relationship of the Bush clan with these financiers of terror and repression.

...I began to listen to this book...had to stop and delete it from my existance...what a partison, smoke and mirror, neoconservative bunch of babble....