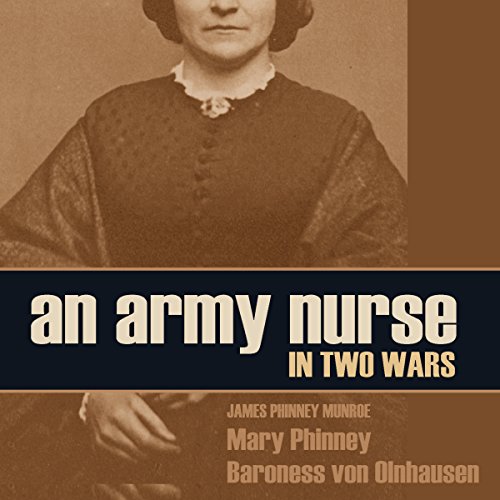 An Army Nurse in Two Wars

An Army Nurse in Two Wars

Her life has been wonderfully fictionalized on the hit PBS TV series, Mercy Street. Here is Mary Phinney's real life in her own words, long prized by historians as a source about Civil War medicine.

American Mary Phinney was ahead of her time. A rebel against the restrictions placed on women of her day, the sad death of her husband, the Barron von Olnhausen, proved to be the real beginning of her life.

Upon the outbreak of the American Civil War, this remarkable woman enlisted herself in the care of sick and wounded soldiers. Working with Dorothea Dix and other notable women of the Civil War, she tirelessly worked to improve the sanitary conditions, medical care, and morale of shattered young men.

Hardly taking a breath from her exhausting years in the Civil War, she went to Europe in 1870 to provide the same services in the Franco-Prussian War. Her experiences as related through her own writing is the story of one of the great women of the 19th century.

Mary Phinney von Olnhausen early found her happiness in living, in suffering, in encountering hardships for the sake of others. She was too human to be a saint, of too intense a vitality to be thoroughly well balanced; but she was what the world most needs, - an unflagging, unselfish, optimistic moral force.

What listeners say about An Army Nurse in Two Wars

I listened to this book influenced by the PBS Mercy Street series. If the Baroness had written an autobiography it would have been fascinating, but the combination of sporadic letters and occasional journal entries did not really leave me with the sense that I truly this woman who must have been amazing in person.