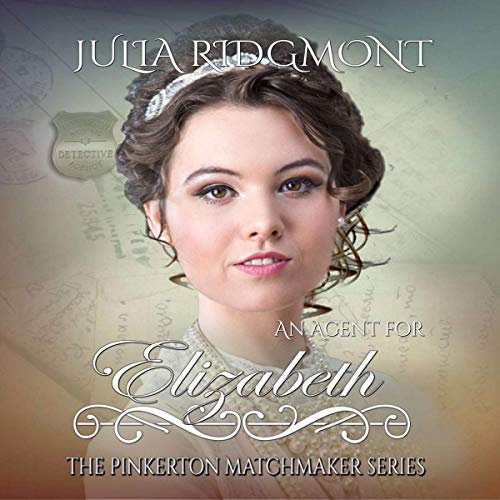 An Agent for Elizabeth

Life for 18-year-old Elizabeth Stone was going smoothly until her mother died and the man she’d been in love with for years suddenly disappeared. Now he’s back in town, but only for a short visit, and he still thinks of her as a kid sister. What will it take to make him notice her as a woman?

Tainted by his undercover work, Pinkerton agent Stephen Randall wants what is best for his childhood friend - and it isn’t him. Brushing off Beth’s advances seems like the best plan. That is, until she is mistaken for a female outlaw wanted for robbery and murder. Now they must work together to find her nemesis and clear her name, and the only way to do that is for Beth to become a Pinkerton agent herself - and marry Stephen.

But with the case - and their attraction - heating up, will Stephen realize his love for her in time to save her?

Note: This book is part of the Pinkerton Matchmaker clean historical romance series, but it can be listened to as a stand-alone.

What listeners say about An Agent for Elizabeth

An Agent for Elizabeth by Julia Ridgmont

This story is sweet and romantic and swoon worthy. I'm so happy about how the Beth and Steven got together and I'm so proud of Beth for being courageous and Steven for being supportive. ❤

The narrator, C.H. Amelia did a great job with the narration..

Held me captive from start to finish!

Great story, well-done narration. I looked forward to getting in my car so I could listen more. I didn't want it to end, but also wanted to know the ending. Overall fantastic.

I enjoyed the An Agent for Elizabeth. I was very drawn to the book and had a hard time putting it down. The author had such great character development! I was fully invested in Elizabeth and Steven. The mystery throughout the book kept me very intrigued.

Or an Elizabeth for an Agent!

Elizabeth is a painfully naive young woman who has had a long time crush on her childhood friend & neighbor, Stephen, and follows him with the hope of convincing him to marry her. She doesn't realize that he has been living a rough, dangerous life as a Pinkerton agent, and she stumbles right into the middle of a challenging case where she happens to look like the villain.

Circumstances, sometimes amusingly so, force Elizabeth to do some growing up and maturing, and her feelings for Stephen do the same. Similarly, Stephen is forced to re-examine his skewed perspectives on family & relationships as his own feelings for Elizabeth deepen.

The story has several surprising twists at the end that clear up all the questions. It's a fun & interesting look at the Pinkerton detectives as well. This book is my first foray into this series & I'm looking forward to reading the others now!