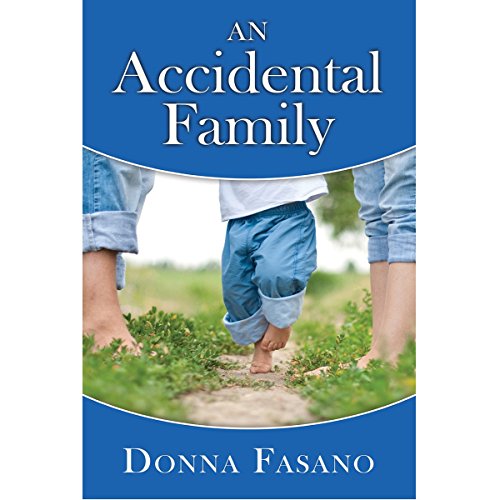 By: Donna Fasano
Narrated by: Laura Jennings
Free with a 30-day trial

and without love they wed.

Jonas Winslow knew nothing about fatherhood, yet he was determined to keep his orphaned nephew. But the boy's aunt, Robin Hampstead, wasn't about to let go of her only remaining family. The solution: a temporary - strictly platonic - marriage…or so they thought.

Their agreement was to share the house and all child-rearing responsibilities, which seemed an uncomplicated arrangement until…Jonas began seeing Robin in a new light, not as a pretend wife, but as a very real woman whose bedroom was enticingly close to his.

This book was previously published by Harlequin™ in 1996 as Daddy Down the Aisle under this award-winning author's pseudonym, Donna Clayton. It was published as part of both the popular 'Conveniently Wed' and 'Fabulous Fathers' campaigns. The book has been meticulously edited and updated, and was expanded by nearly 10,000 words.

What listeners say about An Accidental Family

Have you ever wondered why most romance stories are not laden with children, families and other assorted issues that real people face each day? Because we read to escape, we read to find potential in dreams penned of dashing heroes and damsels in distress, that hope for the happy ending. It’s a difficult balance, because we all have those groundhog days in our relationships, when family is the overwhelming attention grabber, and the time for romance gets pushed to the side.

Donna Fasano has managed that delicate balance in An Accidental Family and creates a story that both entertains and realistically portrays many of the situations faced in today’s relationships. Although Jonas and Robin are tossed into turmoil with the loss of family members and the responsibility of parenting their just one year old nephew, they also must learn to work together and deal with their own personal conflict while doing the best for young Tony.

While they are struggling with their own and the baby’s grief, the sleepless nights and the inevitable battles that all parents know, Fasano has also managed to give Robin and Jonas incredibly strong and well defined interior voices, some interesting and often humorous conflicts and dialogue that is real in tone and content. Both characters grow throughout the story, both personally and in their estimation and feelings for one another.

Beautifully narrated by Laura Jennings, you can hear her smile in the words that she is reading, especially in the parts that would strike a reader as humorous. A good combination of story and narration made for a perfect listen on a rainy and cold afternoon.

I received an AudioBook version from the author for purpose of honest review and feature on the Heard Word at I am, Indeed. I was not compensated for this review: all conclusions are my own responsibility.

The characters and their relationship through difficulty

Could you see An Accidental Family being made into a movie or a TV series? Who should the stars be?

Jonas and Robin had only met a couple of times and didn't get along. Then his sister and her brother die, leaving their young son, so they get married in order to take care of their nephew together. This book really shows their struggles as they try to get along with one another while also adjusting to being parents and grieving the loss of their loved ones. There were some funny moments as well as some heart-breaking moments.

The audio is very well done and easy to listen to. The quality of the audio and the pace are both very good. The narrator Laura Jennings has a nice voice for the story, including a bit of a southern sound to her voice. The character's voices were differentiated just a bit with the inflection of her voice which was subtle but enough to tell who was speaking. She also did a great job with the voice of the baby trying out some early words.