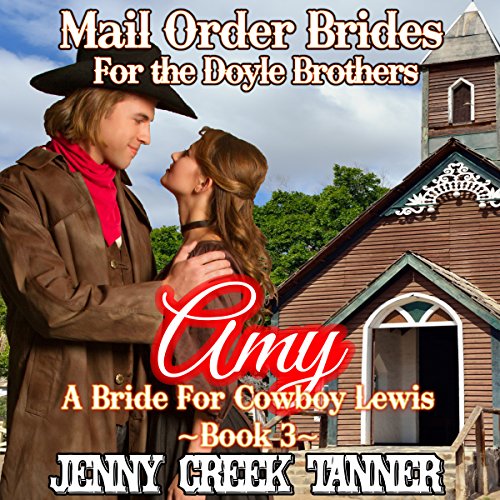 Amy: A Bride for Cowboy Lewis

Amy: A Bride for Cowboy Lewis

After Benjamin and Lolly's wedding, young Amy Schaffer finds herself without a prospective husband and without a sure future....

In this endearing Christian western romance series, three courageous and God-fearing women overcome their desperate circumstances and risk everything to find true love with the three rugged Doyle brothers, who call the Ruby River Ranch in Montana Territory their home.

Catch up with the strong cowboy brothers of the Ruby River Ranch in the Montana Territory, including the eldest brother Warren and his wife Hannah, the youngest brother Benjamin and his new wife Lolly, and their brother Lewis and the woman he can't seem to get out of his mind - the beautiful Amy Schaffer.

After Benjamin Doyle's decision to court and marry Lolly instead of her, Amy struggles with her trust in God's will for her, and with the feelings she has for the last unmarried Doyle brother.

The conversation he had with Amy before he knew his brother was courting her is burned in his memory, but his recent past threatens to catch up to him and the feelings he has for Amy.

Will Amy discover God's plan for her life, even though she feels abandoned and alone?

Will Lewis' recent change-of-life and new-found faith in God help him find his place in life?

And will that place include a life with Amy, or are they both destined for something else?

This book is part of a series, but can be listened to as a stand-alone book as well.

What listeners say about Amy: A Bride for Cowboy Lewis