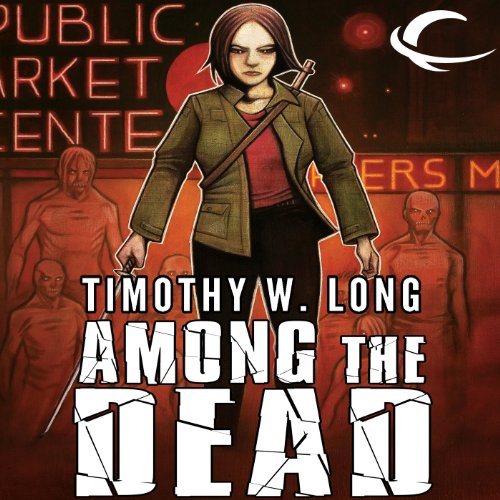 By: Timothy W. Long
Narrated by: David DeVries
Try for $0.00

Seattle is under siege by masses of living dead, and the military struggles to prevent the virus from spreading outside the city.

Kate is tired of sitting around. When she learns that a rescue mission is heading back into the chaos, she jumps at the chance to tag along and put her unique skill set and, more importantly, swords to use. Lester finds a new way to deal with the situation: ignore reality with drugs. When he manages to find himself threatened, he joins with an unlikely ally to take the fight to the dead.

Meanwhile, Mike makes use of his journalistic skills to find the source of the virus, in the process discovering a way to escape the city. Two mysterious words fuel his mad quest: Lazarus Black.

What listeners say about Among the Dead

at the end of among the living, mike, erin, kate, and grinder are running towards the stadium through the hoards of undead. just as they're about to be overwhelmed, lester piles through the undead, halfway crashes, and ends up near mike and his group. as they hurriedly crowd into lester's suv, erin, mike's new love, gets ripped away as lester takes off. among the dead picks up a little after among the living ends. mike, kate, lester, and grinder are alive and safe in the stadium.

lester is a drug dealer and an addict. he escaped his house with a bunch of drugs and is constantly getting high. ok, i can understand that under the circumstances. angela's death haunts him, and he wants to kill all the deaders he can in revenge for killing the only girl he'd ever think of marrying. but what he wants most is a drink of rum. his drug induced haze has him jonesing for rum so he bolts from the stadium as there's a lull in the zombies attacking the gate. grinder chases after him b/c he feels obligated to save lester b/c he saved grinder at the end of book 1. that's kind of a stretch for grinder, who's suddenly become the selfless rock star. now, that an oxymoron. LOL outside the stadium, they run into another group hiding behind a chain link fense led by an annoying vietnam vet, named johnny lee miller. after a pissing contest, lester and him become friends over lester's drugs.

kate is a masochist and a serial killer. her dark half despises people, especially men, and enjoys tearing them apart after she's received her beating. kate volunteers to join a group of reservists, anders, anne, and mark who are going to venture back into the city to rescue anders' sister, kara. kate likes the new environment, where she can kill at will, but she starts losing control when she starts fanatasizing about having a real relationship with mark. something happens to kate that causes her to go bat s#!t crazy and totally loses sense of reality.

as kate's group heads to the office building to see if there are any survivors, that group's story is told. kara, shane, pete, and martha are part of a larger group who've been stuck in an office for 3 days, hoping for a rescue.

neil stays at the stadium, commenting on the deplorable situation. nelson, a reservist he met, tells him that the train will leave a 3 pm, and there's not enough room for everyone. he also tells neil that they haven't contained the outbreak to seattle, and the gov't is going to firebomb the city.

there are a couple of unrelated stories thrown in. marshall, his wife, amy, and their 6 kids are stuck in their apartment building. as they slowly start starving to death, marshall must venture out to find food for himself and his family. kind of a sad story.

while i liked the 1st book b/c of its "believability," LOL yes, i'm actually saying that about a zombie book, i think long stretches his characters past their stereotypical limits for the sake of action and character development.

the story ends with a weird cliffhanger where you aren't sure who has survived. so will i buy the next installment? yes, b/c i'm an avid zombie fan.

overall, an ok zombie novel. 2 1/2 stars. only hardcore zombie fans may want to add it to their collection. if you're new to the zombie genre, there are a lot of better books to read or listen to.

Good book. Typical and predictable. The story is set around several individuals (sadist, drug dealer, and a man who lost his son) whose path crosses several times throughout the book. Other characters are introduced as survival AMONG THE DEAD becomes dyer before the government launches a lethal gas bomb.

The book is well written. Character development is good. A few surprises along the way. Worth the credit!

Timothy Long with another winner!

Would you consider the audio edition of Among the Dead to be better than the print version?

I tend to prefer the audio version of any book due to the convenience and being able to enjoy them on the move!

What other book might you compare Among the Dead to and why?

Among the Dead is a great addition to the "Among" series and leaves you wanting more. I would suggest reading Among the Living first to better understand the characters.

The shocker for me was when Kate was captured and what was done to her, considering her background you knew it was going to be the point in which "the other" took over and dominated her character.

Tim Long in my opinion, is one of the top authors in the genre today. He spends time developing characters and develops back stories that connect you to them. It is a great follow up to Among the Living, all the main characters return and you get right back into the mix of things. He added some very interesting new characters that I enjoyed as well. Tim develops a story and doesn't just go for the rambling zombie. In Among the Dead he clearly defines why some zombies are quicker than others and I thought that was a great idea. There are some that hate and some that love the running zombie, Tim has found a great way to integrate both into his stories. I am absolutely hooked and I can't wait to revisit Lester, Grinder, Kate, and Mike in "Among the Ashes"

By the way would someone please turn this into an HBO series! Talk about a prefect concept for an HBO series, with the back stories this would be a no brainer!

Neah, don't think I'll read the next one

At the end of the first book the characters finally met up in the finale as they scrambled to the stadium. Wow, great, I better go get book two because now the real story is going to start with a group of survivors like regular zombie books. But no. Can't say that this book is a cliche. It again starts off real slow, and soon they all split up and the book becomes a jumble of non related series of short stories. At least no more (non essential) sex scenes this time.

Great that this book tries to be different, but its really hard to beat a winning formula.

Kate is the only cool character which you want to root for, but her schizophrenic personality leaves you disappointed because she isn't what you wanted her to be. In my previous review of the first book, I wrote that she was a bit like Dexter, but that was just from a few paragraphs in the beginning. Dexter has no feelings and takes no pleasure. Kate has a lot of emotions and more. She seems to be a mesh mash of nasty craziness. I don't know what real world psychiatric profile this author is trying to copy, but I am starting to think that he is making it up. I can understand her taking revenge on men, but mindless zombies are entirely different.

I thought this book had a star with Kate, but nope, every time she is a heroine, Timothy Long has to kill the mood and turn her into a monster. Ever see a painting where you thought you could appreciate the artistic value in it, but it's still damn ugly and you'd never hang that in your house? That's how the author paints Kate, and this book.

Good piece of writing in its individual isolated parts, but the over all story is crud.

I'll check out reviews of the next book, but don't think I'll invest further in the development of this story. Certainly not after the epilogue at the end of this one.

What a let down

Would you try another book from Timothy W. Long and/or David DeVries?

The first book was really good and the series had a lot of promise. This one was a started off with a lot of expectations but half way through, I realized it was not going to fulfill my expectations. With all of the great character development from book two, I had high hopes the primary characters would find each other and go on surviving together. However, what we get is the phyco "babe" as the main character. No matter how many times she has her bacon pulled out of the fire by others, she turns on them and kills them with no remorse. Time after time, she bests armed men with her sword because she is such an implausible bad ass.

I'm not sure but I know it won't be anything by Mr. Long.

Have you listened to any of David DeVries’s other performances before? How does this one compare?

I have and enjoy his style.

If you could play editor, what scene or scenes would you have cut from Among the Dead?

I'd have probably killed off phyco babe by having her go down swinging her sword and getting overwhelmed by Zs. During trying times, it can bring out the best in folks. In her case, she remains a deeply disturbed woman who can never appreciate the efforts others have made to keep save her miserable life.

I would like to have seen the drug dealer and his woman survive and actually set up shop dealing lead, as promised. I thought they would be smarter than the rest and set up in an a weapons and ammo wholesaler warehouse or, abandoned National Guard armory and sell primo weapons and ammo and continue the good fight.