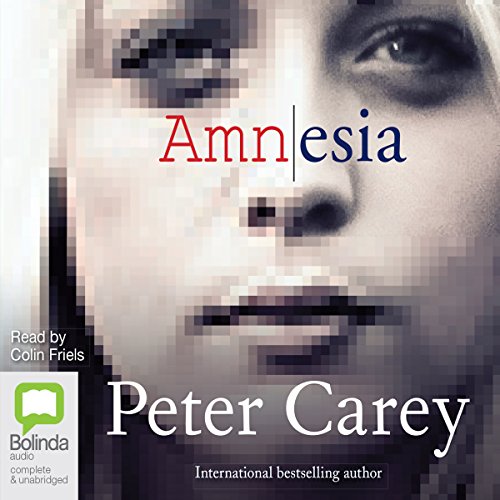 By: Peter Carey
Narrated by: Colin Friels
Try for $0.00

How does a young woman from suburban Melbourne become America's public enemy number one?

When Gaby Baillieux releases the Angel Worm into the computers of Australia's prison system, freeing hundreds of asylum seekers, she sets off a chain reaction. These prisons are run by US companies, and so the doors of some five thousand American institutions have also opened. And to some watching eyes, the secrets of both countries threaten to pour out.

Was this a mistake? Or has the elusive Gaby declared cyberwar on the US, as part of the longstanding covert conflict between the two countries that has as its most outrageous act the CIA-engineered coup of 1975 – a coup so brazen we immediately forgot it as part of our great Amnesia?

What listeners say about Amnesia

dont bother its a collection of boring disjointed ramblings.. thought i had the story line then another completely different scenario pops up...

I have loved pretty much everything of Carey's that I've read but I put off grabbing this title for a couple of years due to the average reviews here on Audible.
Why did I wait??!!?? This is a wonderful book well read by Colin Friels.

I am sad to say that this still isn't Carey at his best ("Oscar and Lucinda", "Jack Maggs") but pleased to say it is a step up from "His Illegal Self". In plot, it has some truly interesting ideas associated with that quintessential Australian fascination with the Dismissal (akin to say, Watergate in the US or the Cambridge spies in the UK), but those ideas don't really go anywhere. The same might be said of the Angel Worm virus that has Wikileaks like potential. Accepting that the Dismissal of the Whitlam-Labor government is a backdrop to the title reference, and the virus is a device to unite the two principals, their partially shared story just does not make enough of the interesting potential plotlines.
On top of this, Carey continues to pepper his narrative with Oz idiom. Sometimes this works and adds to the flavour of the language, but mostly it seems forced to me and made me cringe. This was made worse by Colin Friels' reading. I love Friels as an actor, but this just does not work in my opinion. First, it is a reading. There is no personification, although there is dramatisation. Secondly, the ocker is just too ocker, even allowing for the 1970's derivative for the action, albeit that nearly all of the action takes place in the Noughties.
I'll keep persisting with Carey because I love some of the earlier work. If you've not read them, then you might be more generous than me about this title. Me, like the protaginists in this title, I'll keep hoping for a better time.

I rated it midway because it got a little technical for me especially the computing. Moreover, the story became somewhat confusing I thought but then I wish I could write like Mr Carey. I did enjoy it and it is a 'page-turner' so to speak.

Another Fabulous Novel from Peter Carey

What made the experience of listening to Amnesia the most enjoyable?

The reader, Colin Friels, had a true Aussie accent without being overly hard on the ear, and that true accent lent authenticity to Felix who could only have been an Australian character. They don't breed his type anywhere else.

For sure it was Felix - flawed yet determined, cowardly yet honourable. Gabby got on my nerves, which she was supposed to do, being a self-centered teenage girl. It's a great portrayal of an annoying adolescent. Carey could only have written this character from first-hand experience. She's the real thing.

With this book Peter Carey has taken a hackneyed plot - teenage rebel fights the evil establishment - and shown the rest of us how to turn a pot-boiler into a unique story written in exemplary style. It's not his best book, but then his worst books are better than almost anyone else's. Amnesia is lively, fast-paced, edgy, and a truly modern work of literature. Its rash of plot hooks make it verge toward a B-grade popular read at times and I wish Peter Carey hadn't used them. He writes so well he doesn't need gimmicks. The insights into Australian political history give the narrative depth and clout, and highlight Australia's tendency still to sacrifice our own values to those of other nations. A great read and a significant book.

Only got halfway through this and it was six hours of waffle. Gave up in the end and couldn't listen any more. The most boring
book I have listened to.

The title of this book is perfectly apt

I've only just finished, and this is already the most forgettable read of my life

Don’t know what the book is talking about

Tried hard to patch up a hacker story as it was hyped, but I failed... the narrator was good tho

6 chapters in and the story hasn't started yet! We are still character building! It's more a story about an arrogant journalist his life, family, thoughts,friends, job history. Maybe it gets better but I like a book to grab me from the start.