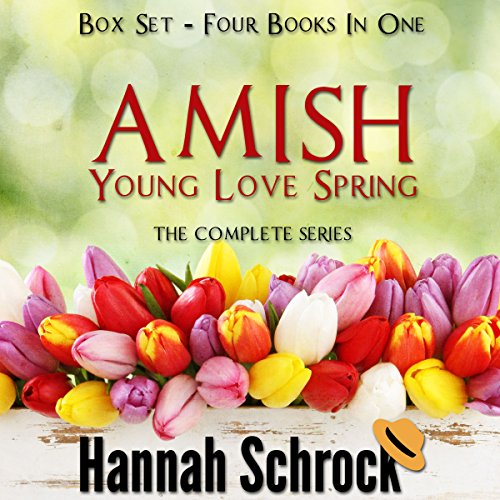 By: Hannah Schrock
Narrated by: Lulu James
Try for $0.00

Mary Byler was confused. She had dreams of an Englisch life, however she was the only daughter of the Amish bishop. The bishop was very protective of his daughter, probably brought on by the death of Mary's mother when she was young.

The bishop wants nothing more for Mary to be baptized and then begin her search for a husband. Jack King, a young Amish farmer seems like a good option for a husband, kind, caring, reliable and handsome. Mary isn't so sure, rejecting his offers of a buggy ride.

A chance meeting in town with a handsome Englisch man leads to conflict with her father. But disaster is only a stones throw away. How will Mary cope with her conflicting feelings? And who will be there to support her if it all goes wrong?

Rebecca Miller was fed up with the talks from her parents about the fact that she was getting old. She wasn't yet 20, but her parents seemed determined to marry her off at the earliest opportunity.

Eli was the most handsome, young Amish man in the community. The problem was he knew it. He knew all of the girls were half in love with him. His father knew it as well and he was determined to get Eli married before any Englisch girls got hold of him.

The two sets of parents conspire to get the young couple together. However, Rebecca isn't keen on the proposed match.

Is Eli hiding something under his confident persona? And who the strange man that come's to Rebecca's aid after a buggy crash?

Mary Zook's world changed when an Englischer vet was needed to help with the delivery of a foal.

Samual Lapp's world changed as well. Mary was no longer spending time with him, but with the dashing, handsome Englischer.

Despite warnings from her brothers about the man's intentions Mary becomes more involved. Are the Englischer's intentions true? Or is he hiding something behind his dazzling smile?

After two years she still is no closer to coming to terms with her grief. A change encounter leaves her rock bottom.

David Gingerich is returning to the Amish community after leaving in the English world since he was child. However, his aunt falls ill and he and Sarah have to act quickly to save her.

Will Sarah learn to love again or will she leave for something new?

These four short clean Amish romance novellas feature young women that have to make choices in their lives. Whichever choice they make will effect not only themselves

but their families and community as well. It's a nice little box set.

The narration was well done. The characters were well portrayed by Lulu James.

I was given this free review copy audiobook at my request and have voluntarily left this review.
This is a very quick listen.

I enjoyed this collection of short stories. I liked a couple better than the other two but they were all enjoyable. I usually don't read novellas because I feel most of them leave to many questions. These all had a nice ending but they too left me questioning what happened next. It's nice that the characters ended up together but I want to know more about their HEA. I like this author and her writing style as well. I think that each story had a great start but would of loved to see/hear more on each of them. I liked the narrator too. She had a pleasant voice and did a great job bringing each story to life. I would listen to her read other stories.