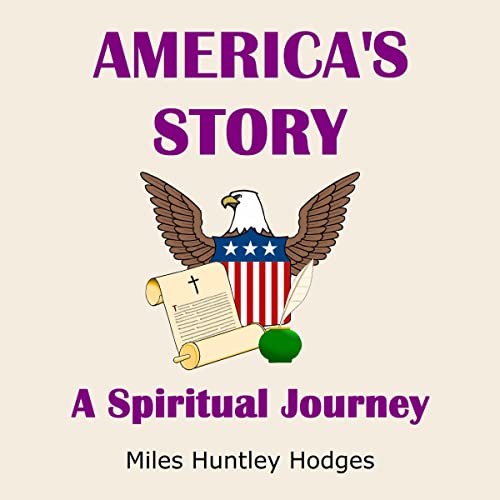 This audiobook begins with a look at the ancient Israelites, Greeks, and Romans - as well as medieval feudalism and Calvin's Geneva, in laying the moral foundations for both feudal Virginia and Puritan New England. It looks at some early spiritual wanderings...and a great awakening that brought American back on course - in time to fend off a British effort to end America's spirit of independence.

It covers the creation of the new republic, the growing divide over slavery, and the civil war that followed. It details the post-war Industrial Revolution, the age of national imperialism, World War One, the Roaring Twenties, etc., all the way up to today's Biden presidency; in short, all the periods covered in a typical US history.

What distinguishes this work is its emphasis on the social-moral dynamics, both at home and in American foreign policy. It focuses heavily on America's constant struggle to stay on course as a democratic/Christian "city on a hill", covenanted with God to serve the world as a "light to the nations"; America itself having to combat spiritually the constant (and very self-destructive) urge of human reason to want to play God and control life through well-reasoned plans and programs - both at home and abroad.

It concludes with a review of the lessons we ought to learn from our own American history: the challenges presented by America's own subcultural complexity, the importance of having a higher or godly vision uniting and guiding the nation, the key role that moral leadership plays in keeping that higher vision in focus for the nation, the importance of inspiring the world rather than trying to "fix" it, and the vital role America has been assigned to defend Western/Christian civilization itself. But, most importantly, the audiobook emphasizes the importance of maintaining America's very special covenant relationship with God in Jesus Christ.

What listeners say about America's Story: A Spiritual Journey