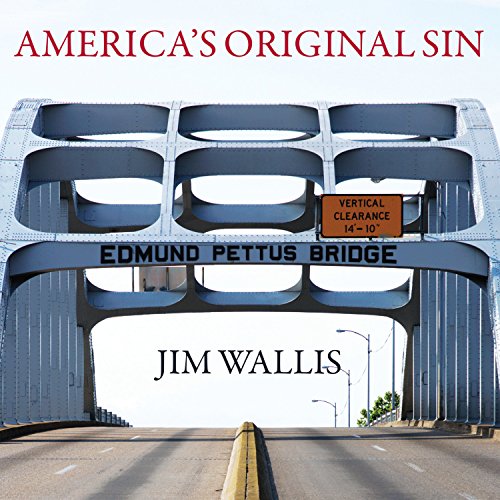 By: Jim Wallis
Narrated by: Patrick Lawlor
Try for $0.00

America's problem with race has deep roots, with the country's foundation tied to the near extermination of one race of people and the enslavement of another. Racism is truly our nation's original sin.

"It's time we right this unacceptable wrong", says best-selling author and leading Christian activist Jim Wallis. Fifty years ago, Wallis was driven away from his faith by a white church that considered dealing with racism to be taboo. His participation in the civil rights movement brought him back when he discovered a faith that commands racial justice. Yet as recent tragedies confirm, we continue to suffer from the legacy of racism. The old patterns of white privilege are colliding with the changing demographics of a diverse nation. The church has been slow to respond, and Sunday morning is still the most segregated hour of the week.

In America's Original Sin, Wallis offers a prophetic and deeply personal call to action in overcoming the racism so ingrained in American society. He speaks candidly to Christians - particularly white Christians - urging them to cross a new bridge toward racial justice and healing.

"A thought-provoking plea to white evangelicals and white Christians in general." ( Library Journal)

Important book, but narrator was an amateur

Jim Wallis is an important voice in the American social justice scene, and this is an important book. But this narrator positively butchered the reading. I cringed continuously over his mispronunciation of commonplace words in the Christian vocabulary: Colossians, Barth, koinonia, ekklesia. I was offended by his use of fake European accents in quoting international authors and of a soft, sibilant whisper in quoting female authors (every time -- an utter insult). Even worse was his cartoonish mimicry of The Rev Dr Martin Luther King Jr's speaking voice. Audible.com: Never, ever hire this narrator again. And do justice to Jim Wallis by hiring a new narrator to re-record the book.

Was surprised on how objectjve the author was toward white priveledge and what would be requiered to nullify it. This ought to be required reading in schools, high school and college...

Good Intro to the broad issues of racism

The preface to America’s Original Sin opens with a description of the shooting and Emmanuel AME Church in Charleston, SC. Just a few days before that I read that section, I watched the documentary Emmanuel that also recounted that shooting. Wallis hoped that in the aftermath of the shooting there would be a change in the way that we talk about race and racism within the church and country as a result. But four years after the shooting, there has not been a fundamental shift in the conversation. The Confederate Flag was removed from the South Carolina Capital grounds, the SBC condemned the flying of the Confederate Flag at its annual meeting that next year. But it is hard to point to any other fundamental changes in the conversation.

That lack of change is not particularly surprising given the history of Christianity in the US, but I do think that as we read books like America’s Original Sin, it is important that we pay attention not just to the theological affirmations of what we as Christians should be doing, but also the history of what we have done. The Emmanuel AME Church shooting should have been a wake up call to the church, but it wasn’t. There are hundreds of other points history, including the church kneel in rallies in the 1950s and 60s that should have been significant wake up calls, but they haven’t been.

I probably would not have picked America’s Original sin up if a group in my church had not been reading it, but I wanted to participate in the discussion, so I read it. I respect Jim Wallis and I thought the book was worth reading. In general, I try to primarily read minority voices when I am reading about racism. There are other books that also have introductions to Christianity and Racism that are similarly good. Every book has its own orientation and focus. And Wallis does have a real history working for racial justice within the church.

But at the same time I do not agree with how all of that shakes out in every point. I think that many that are resistant to discussing racism within the church or even acknowledging racism as a real problem either in or outside of the church are going to be turned off by Wallis’ politics. It is not that I disagree with all of Wallis’ politics or that I disagree with how this Christianity influences his politics, but like it or not, Jim Wallis is identified primarily with the Evangelical political left. So I think that limits who will pick up this book and how those that do, will respond. There is certainly need for the political left to deal with its own racism. And if Wallis had more directly targeted the racism of the political left (as Robin DiAngelo particularly focused her book, White Fragility, toward liberal Whites, I think this could have been a more helpful book.

If I have a complaint, it is that Wallis makes himself too much of a character in America’s Original Sin. I understand that he is personalizing and giving illustration to why racism matters. But I also think that it ends up centering his experience more than is helpful.

Again, I agree with many of the conclusions and steps along the way. This quote I think rightly focuses racism on the systemic:

"Sociologist Allen Johnson, whom I cited earlier on the history of white supremacy, also discusses the implicit nature of our biases from that history. He says: Most of the choices we make are unconscious, it being in the nature of paths of least resistance to appear to us as the logical, normal thing to do without our having to think about it. This means, of course, that we can participate in systems in ways we’re not aware of and help produce consequences without knowing it and be involved in other people’s lives, both historically and in the present, without any intention to do so. . . . I could say this history has nothing personally to do with me, that it was all a long time ago and done by someone else, that my ancestors were all good, moral, and decent people who never killed or enslaved anyone or drove anyone from their land. Even if that were true (I’ll never know for sure), the only way to let it go at that is to ignore the fact that if someone was willing to take the time to follow the money, they would find that some portion of the house and land that we now call home can be traced directly back through my family history to the laws and practices that whites have collectively imposed through their government and other institutions. Back to the industrial capitalist revolution and the exploitation of people of color that made it possible. And back to the conquest, forced expulsion, and genocide through which the land that is now the United States was first acquired by Europeans. In other words, some portion of this house is our share of the benefits of white privilege passed on and accumulated from one generation to the next."

But I think that those that object to his understanding of systemic racism are going to be relatively unconvinced by America’s Original Sin.

I learned a lot from this book, and it gave me new perspectives on race, racism, and American culture. I did not enjoy the narration by Patrick Lawlor. He constantly over-emphasized, perhaps attempting to convey the exigency of the text's topic, but ending up making every sentence seem like a matter of life or death. A fuller range of vocalization and emphasis would have made for much easier listening.

this book is so similar to other critical race theory/systemic racism books that it's not worth buying. The author does not do a good job backing up sweeping statements with anything more than anecdotal examples if even that.

they're multiple times throughout the book that he flat out contradicts himself in previous statements as well as completely misrepresenting a multitude of situations.

...in performance and thought. Valuable. Has bumped by paradigm a bit. Time well spent. Highly recommend.

Lots of great data and personal recollection past and present on dealing with diversity from a faith persprctive in the US.

A primer for theology of racism

Would you consider the audio edition of America's Original Sin to be better than the print version?

This audio book will give the reader a foundation upon which one can build and grow in knowledge of racial deprivation that has occurred in the U.S.A. over a period of four centuries.

Transformative. Wallis deals with the past, present, and future in regards to the battle against racism.

This book is the best I've ever read in regards to explaining in entirety the historical context of racial oppression in America, it's damage, the current injustices and what needs to happen in order to move forward into a society that represents the new majority of diversity. This is a must read book. It should be the center of dialogue in schools, churches and multicultural relations.