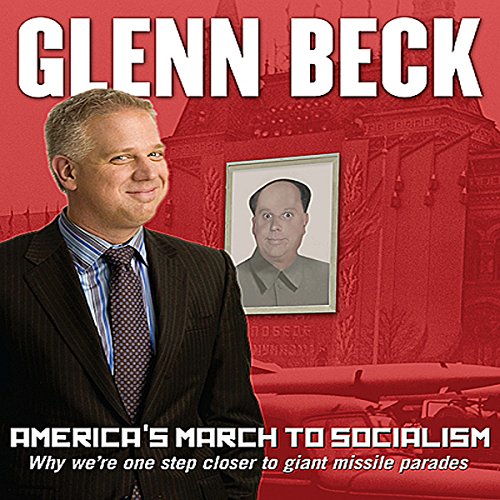 "The Glenn Beck Program presents: More truth behind America's March to Socialism." So begins one of the most popular regular segments of Glenn Beck's top-rated daily radio program. Now, in this audio exclusive, unavailable in any other format, America's March To Socialism collects over an hour of the most memorable, insightful and controversial of these segments into an audio program that will inspire the ever-expanding base who know Beck from his phenomenally successful radio and television series and his #1 bestselling books.

From massive government spending to media declarations of the death of capitalism, Glenn Beck hears the sounds of boots marching America toward a system of government that bears a closer resemblance to socialism with each passing day. To document this, he focuses on stories that range from the headlines - irresponsible stimulus spending, greenhouse gas cap-and-trade programs, instant unionization efforts - to more obscure local stories that might otherwise be overlooked, such as Chicago's out-of-towners tax, and Connecticut's attempt to undermine the authority of the Catholic Church. He also provides snapshots of the encroaching progress of socialistic programs from around the world, railing against the Europeans' call for a global New Deal.

A visionary, provocative call to action, as timely and courageous as his #1 blockbuster An Inconvenient Book, America's March To Socialism presents Glenn Beck at his absolute, irreverent and authoritative best.

What listeners say about America's March to Socialism

i discovered this was a waste of time and money considering it can be heard on his rerun radio shows. VERY disappointing!!!!!

I do like Glenn and have read his other books with pleasure.
In this audio book however, the level of the background music forced me to put it away after the first chapter. Pity, I hope it can be reissued without the annoying 'marching band' music.

Good but too short.

If you could sum up America's March to Socialism in three words, what would they be?

Scory we need to wake up.!

In formation was clear.

What does Glenn Beck bring to the story that you wouldn’t experience if you just read the book?

How bad socialism is.

Every one should hear it.

I enjoyed his ideas, but the background music annoys. Also, the book is arranged into snippets or sound bites, which I understand are from his shows. All in all, however, I'm not disappointed I bought it.

Information Great - Background Music not so much!

Thank you Glenn for the wonderful dead on information! However the background music is quite annoying while trying to listen to the important substance of information you are trying to share. Maybe use the music to intro and outro the chapters but turn it off during the chapter!

It was once said by a former socialist presidential candidate that while America might never accept socialism itself, America will accept every tenet of socialism under the guise of progressivism.

Beck is dead on (and funny).

We all need a review of valuable info this is priceless info about every day stupid stuff that should never happen we need to keep this in mind and fight to stop the mindless from taking over this great country. thanks to Glenn Beck for this reminder.

The crazy characterized voices and looping intros and outros from the radio show get annoying when done for a full hour; one intro and one outro for the hour session would suffice. Nothing wrong with the context, just very poor editing of the redundant characterized voices and background music. I understand that Glenn Beck is pasionate about what he does, but I could do without the added dramatization.

I love Beck's other books, but this is apparently a montage of one segment from his daily radio show. Each of the many news stories point out the insanity and destructiveness of the left-wing in our government. Since I don't get a chance to listen to his radio show, the format is initially novel and interesting, with its sarcasm and wit and even the music (it didn't bother me at all), but the repetition of the same segment over and over made it kind of grating. The editor/producer really should have broken it up with a different type of format in between every 3 or 4 segments, such as a longer editorial from Beck about one important issue. In the end, this is just a cut and pasted collection of audio clips from the show, not something new that took creative effort to put together. Hard core Beck-heads may love it, but it may be best to listen to it one or two segments at a time rather than listening all in one sitting as i did.