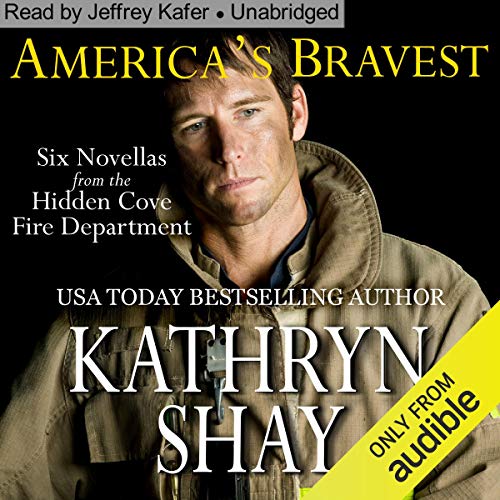 In Americas Bravest, each of the six novellas details both the love and work of one firefighter with overarching themes of arson, a blogger out to discredit them, and balancing their personal and professional lives. In In Too Deep, Captain Gabe Malvaso struggles with his attraction to Rachel Wellington, a firefighter on his squad. But when they're trapped in a basement, thinking they'll die, all bets are off. Hot Shot picks up with Paramedic Brody O'Malley, who's happy with single life until a class reunion where he meets Emma Walsh, the only woman he ever loved. But because he broke her heart, she refuses to rekindle old flames. Worth the Risk follows Ryan O'Malley, Brody's twin cop brother, as he pursues prickly Lieutenant Felicia White, who's always disliked his "playboy" persona. But when they are forced to work together on an arson case, sparks fly. El Bombero is the story of firefighter Tony Ramirez and his beloved wife Sophia, sweethearts since high school, who run into the biggest challenge of their lives: Sophia can no longer tolerate the danger her husband is in every day. In Rescue Me, twenty-four-year-old Sydney Sands saves the life of local businessman Max Delinsky only to fall head over heels in love with him. But trouble comes in merging the discrepancy in their ages and Max's difficulty with her past. Trial by Fire tells the story of Battalion Chief Cal Erikson, who has been fighting for two years with blogger Parker Allen about the fire department. Imagine his surprise when he finds himself attracted to the fiery journalist with deep scars from her past. The arson case is solved but not before both their lives are endangered. In The Epilogue, get a closer look at how all six couples live happily ever after!

What listeners say about America's Bravest

I Loved This Book!!

My Truly Wonderful brother-In-law was a firefighter. When he was diagnosed with cancer I watched his brother and sister firefighters form a silent net of support around him and his family. A casual comment about firewood resulted in three firefighters, chopping and delivering a cord of firewood the next day. This was just one tiny example of the many ways they rallied around the family.... It made a powerful impression on my because the firewood comment was so fleeting and unimportant in the dinner spent with one of the firefighters and his wife. It was like they watched carefully for any way they could help, and we're so connected to the whole family that they filled needs before a request was ever voiced.
Kathryn Shay' captures the heroism, hard work, pride, and this powerful brotherhood bond perfectly. I was sorry to close the book and leave behind these people who had made such an impact.
I am seriously thinking about baking some cookies for the firefighters who protect my neighborhood!!! And I will definitely be reading more of Kathryn Shay!!'

Love the Series, but not so much this book

It is worth the listen,but after reading the other in this series, the short stories seemed superficial.

I would have loved a full story, not the short stories as part of a series.

No, because of the short stories, I found myself putting the book down for long periods of time between these stories.

recommend reading. Love this series, each one i read gets better than the one before the one i have just read. Love all the new characters in the books and pages. Love the twist and turns it takes me through reading each book. I even tell me friends about the books now.never stop give me more to read. Love to reread each book as much as i can.love each love affair and getting to know each characters.i have learn allot about fire fighters and what they have to do just to put out fire and protect the people they save and each other.how they stand together for one another.now i have more respect for them. Their job can't be as easy as people in general say that it is. I don't think that they know how much is involve in training to safe lives as much as they do.

Best books in have read in a long time I couldnt wait to finish one and start the others.

What did you love best about America's Bravest?

This being more than one story was a plus. There were many different characters and story lines to fall in love with.

What was one of the most memorable moments of America's Bravest?

In each of these stories there was a nail-biting rescue in a fire which made me hold my breath until everyone was safe.

Since there was more than one story this is hard to pin down. In each story I always love the part where each H&H of the story finally realized they couldn't live without each other. There is always a very tender movement they decide they want to be together.

The part of each of these stories where we are reminded of the job that firefighters/cops do and how they put their lives on the line for us. I was moved to tears each time this is brought up in the stories.

While I enjoyed this book very much, I think it was a little over the top with the woman can do the same job as a man theme. It was a bit much in each of the books.

Short stories, not one book

Several (rushed, in my opinion) short stories rather than they up-until-now intertwined stories of the previous books. They aren't bad, but I would have preferred two or three separate books with the couples' stories following a overarching plot line. *shrug* oh well

This book was interesting and gives insights to our brave firefighters and police officers. The people who protect us.