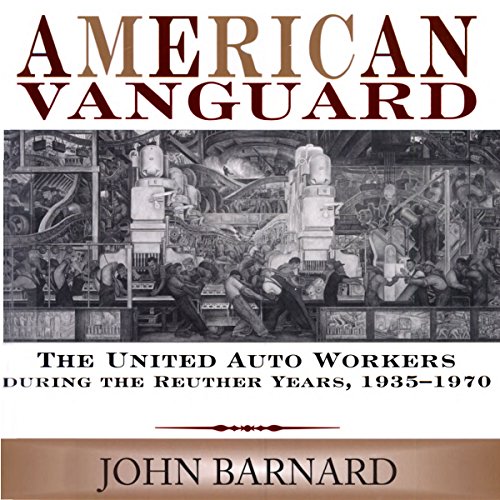 By: John Barnard
Narrated by: Jeff D Konrad
Try for $0.00

The struggles and victories of the UAW form an important chapter in the story of American democracy. American Vanguard is the first and only history of the union available for both general and academic audiences. In this thorough and engaging narrative, John Barnard not only records the controversial issues tackled by the UAW, but also lends them immediacy through details about the workers and their environments, the leaders and the challenges that they faced outside and inside the organization, and the vision that guided many of these activists.

Part one explores the obstacles to the UAW's organization, including tensions between militant reformers and workers who feared for their jobs; ideological differences; racial and ethnic issues; and public attitudes toward unions. By the outbreak of World War II, however, the union had succeeded in redistributing power on the shop floor in its members' favor. Part two follows the union during Walter P. Reuther's presidency (1946-1970). During this time, pioneering contracts brought a new standard of living and income security to the workers, while an effort was made to move America toward a social democracy-which met with mixed results during the civil rights decade. Throughout, Barnard presents balanced interpretations grounded in evidence, while setting the UAW within the context of the history of the US auto industry and national politics.

" American Vanguard is not only valuable to any historian studying American history but also offers valuable lessons to those concerned with the present state of the American labor movement." ( Michigan Historical Review)
"What a marvelous book!" (Kevin Boyle, Ohio State University)

What listeners say about American Vanguard

the reading was poor. So was the perspective, check out Ruether's biography by Lichtenstein instead.