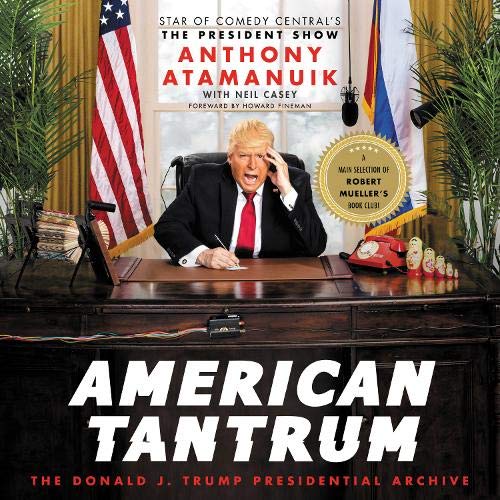 In American Tantrum, the star of Comedy Central’s acclaimed The President Show opens the vault and releases Donald J. Trump’s presidential archives. The result is a devastatingly hilarious audiobook that gets closer to truth than any nonfiction account, voiced by the author, Anthony Atamanuik, with guests Neil Casey, Kathy Griffin, Tom Arnold, John Gemberling, and Lennon Parham.

The presidential archives. Every other president has made a mess of it. Barack Obama is currently spending millions of dollars (probably trillions, if you want to know the truth) building a monument to himself. And they don’t even charge admission at these places! No wonder this country is a zillion dollars in debt. And what’s the point? These guys are already out of office and old news. We hate to say it, folks, but the presidential library is totally broken and needs to be made great again.

America, we herewith present the first and only presidential library to be released in real time, while the president is still in office. (Why delay?) But wait, there's more! Who wants the hassle of having to go to some boring building in the middle of nowhere? (The Eisenhower Library is in Abilene, Kansas - yikes!) What if you could have your favorite president’s library delivered to your home, today! That’s not all! What if you could carry that library with you everywhere?

It’s available now at the amazing price of $23.95!* Never has wisdom been so accessible!

*Offer not valid to employees of the US Department of Justice.

What listeners say about American Tantrum

MAJOR problem with this book!

I got this book because I’m a big fan of the author’s TV show, The President Show. The author totally understands who our current occupier of the White House and what drives him. An audiobook is the perfect vehicle because if you didn’t know that it was the author talking, you would swear it was Trump....which leads me to the major problem I had with the book. As outrageous as the dialogue is, I found myself wondering if I was listening to fiction or whether I was listening to a news bulletin. In the beginning and through most of the book, what I was listening to could have happened and could be happening. Our politics under this guy is so unbelievable that the book doesn’t feel like fiction at all. And that’s a terrifying state of affairs. The book is a masterful hatchet job told from the inside out. God help us.

Very funny, frighteningly accurate and prophetic. I just about fell out of my chair when Tom Arnold arrived on the scene

Brilliant. Hilarious. Terrifying. All those things

I honestly cannot sing enough praises to this book. Absolutely brilliant. What a shame it's not a big hit, poor Anthony Atamanuik... He is of course the star of Comedy Central's President Show, and in my view the greatest 45-impersonator out there. It is a crowded field these days, true, but his oddly deep take analyzes this tragical/satirical era like no one else.

I have no idea why there's not more President Show (or The Opposition for that matter, but that's a lament for another day), damn you Comedy Central!

The premise of American tantrum, is that an editor of a golf magazine is interviewing our illustrious prez for a presidental library pocktbook that needs to come out before Obama's actual presidential library opens. It starts out innocuous enough, this seemingly apolitical fellow as the straight man to Atamanuik's crazed commander-in-chief. In fact, at the start of the book it's pretty funny but not outstanding and one wonders if the joke can be sustained for an entire book.

Then, some kind of a plot begins to develop. The interviewer is apparently an alcoholic, and starts to go on his own rants which can get very dark and very racist, and also involve an infidelity episode. I shouldn't say more and spoil it. Then there's the weird Nikola Tesla references which actually taught me a few things.

Some of the funniest parts were the calls to various world leaders and business tycoons, with more smart impressions and unique takes on the state of the whole world not just America.

And lest I forget, Bannon's "Jack Renegade" stupid action hero self fan fiction makes horrible anti-Semitism a laugh riot! Seriously, this gets the essence of Bannon like you won't believe.

As the book comes to a climax, the Mueller and Cohen plot becomes more central. (The messages at his "consulting" firm, ha! Those election recordings, like that tower meeting and other collusions, are both absolutely hilarious and also seem surprisingly probable.

The epilogue absolutely blew me away. Like an essay on the darkness of America's soul, exposing what's bigger than who is in office now, the past and future and what to make of humanity's destiny, and then there's the 7-eyed raven. If only it was required reading all through the land...

After reading Woodward's book, I needed this. Even though it's comedy, Atamanuik and Casey are as qualified as anyone to frame just how the world works these days. I suppose one could make comparisons to Fire and Fury, in that much of it may not technically be confirmed but there certainly is a feeling of truth in this kinda-historical document.

In fact, Anthony Atamanuik has come up with actual predictions in character on multiple occasions. Look it up: he's done ridiculous bits on his show and then they've turned out to come true later. That's how good he is at getting into our demented leader's head.

This is a valuable skill. I just wish this book stood out more among all political tomes that swell the bookstore.

Lastly, give audiobooks a chance and experience this book by listening. With the prez in character among other great actors, it's basically a comedy album. Which also happens to be the culmination of the legendary President Show.

What a ride. Thanks for bringing a smile to my face as I'm crying.

Perfect for the Audiobook format

First of all Anthony Atamanuik was the perfect Trump impersonator during The President Show. This audiobook shows how much material they had on the ready had the show not suffered an early demise. This one skewers Trump in a fun and friendly way, but also nails the rights wing eco system. Atamanuik and Grosz made the nightmare of the Trump years slightly more bearable. Thanks gents!

The trump we know really exists

At times I would swear I could see the nonsense being spewed by the guy “playing” trump would be exactly what our current POS President would say. Hilarious and pathetic rolled into one.
There were times however when the book rambled on a bit to much on a few things.
Not horrible but that is the reason I gave it 4 stars instead of 5.
Definitely a fun listen for all the people who are excited about saying good bye and good riddance to this clown come November!

I'm generally obsessed with Atamanuik's impersonation so I was already a sucker for this. The performances are all so hilarious... the Kelsey Nelson character was such a perfect touch. Good for fun when you don't think too hard about how real it is 😋

This book should not be read or listened to due to how horrible this president truly is. Do not read. I would advise to burn this book.

Zany fun times with the president

Atamanuik's performance of Trump on The President Show was good, this book, great! The story is honestly a bit difficult to follow if you're multitasking, but is that really a bad thing if Trump is naturally off on a tangent in regular conversation? Entertainment and "accuracy" related, it was a great book. The best book, a tremendous book, with the best words. There's much to enjoy with this one and worth the checkout.

more of the president show

if you're a big fan of the president show this will satisfy any desire you have for more, which is I'm pretty sure exactly what they set out to do

That was a Wild Ride! This all makes sense. I now understand what’s going on in his brain.

Just hours and hours of laughing...pausing briefly to cry when I think of how close to reality this is.

so bizarre yet so believable!!

this guy is a genius - hilarious and prescient___

great concept and framing hilariously delivered, big fan of the president show and this was so funny

This was a laugh out loud listen - the performances are so good. It is high-energy all the way and the jokes fly one after another. Try keeping up with it, its pays off. A superb performance all round.
In between the laughter the reality of the Trump administration kicks in. It's a profound experience all round.
Highly recommended.

Great satire, great comedy. Adam Atamanuik is by far the funniest Tump impressionist. The 2 things I would critique are that the actors seem not to be together when recording so sometimes the dialogue seems to remind you of this through their tone and no overlapping of convo. Also the recording should have been done in a better sound booth.
"Use a credit and download this tremendous audiobook, just tremendous. The writers are losers, but they can't get enough of me, so true, so true."
Audiobook review Donald J Trump 2018.

The only problem with this book is distinguishing it from reality. It is superbly funny, but too close to the vile parody that is the current reality of politics.