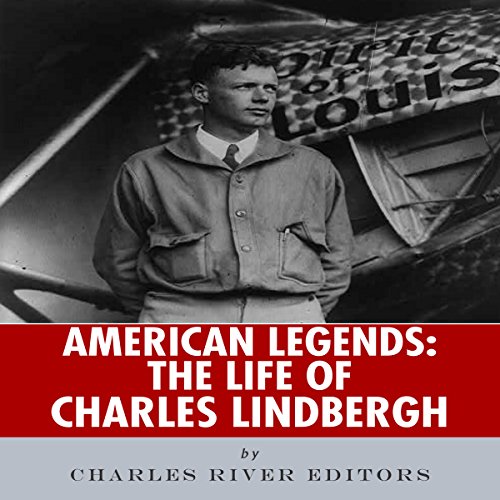 By: Charles River Editors
Narrated by: Tom Lennon
Try for $0.00

In many ways Charles Lindbergh represented the best and worst of America during the first half of the 20th century. Lindbergh became famous for being an aviation pioneer whose solo flight across the Atlantic captured the imagination of an entire world, yet he was an isolationist who wanted to keep American freedoms safe for Americans and no one else. Lindbergh was the quintessential family man, yet he fathered illegitimate children and suffered an unspeakable tragedy that became known as the crime of the century. Lindbergh embodied some of his era's greatest virtues and harbored some of its worst prejudices.

Lindbergh was a 25-year-old US Air Mail pilot who was probably best known for two crashes before shooting to fame with his nonstop flight across the Atlantic from New York City to Paris on May 20-21, 1927. Lindbergh was Time magazine's first Man of the Year in 1927, and he used his newfound fame to promote the development of commercial flight and become a spokesman and symbol for advances in aviation.

Tragically, Lindbergh was the subject of front-page headlines in 1932 when his infant son, Charles, Jr., was kidnapped and murdered in the "crime of the century". After going into voluntary exile in Europe, Lindbergh found himself embroiled in scandals as he toured German (and Luftwaffe) aviation systems and took isolationist stances, at times making comments that were tinged with anti-Semitism and in favor of eugenics.

After Pearl Harbor, Lindbergh was rejected from serving in the armed forces, likely because President Roosevelt thought he was a Nazi sympathizer. But Lindbergh worked his way through administrative and technical positions to give himself the opportunity to fly about 50 combat missions in the Pacific, impressing his colleagues with his flying abilities and technical know-how.

After World War II, as Lindbergh began to fade from the spotlight, he took up a number of causes, writing books and supporting environmental initiatives. The controversies began to fade as well, and when he died in 1974, he was remembered fondly for the Spirit of St. Louis and sympathetically for the crime of the century.

American Legends: The Life of Charles Lindbergh chronicles the amazing life and career of Lindbergh, his greatest highs and most notorious lows, and everything in between.

What listeners say about American Legends: The Life of Charles Lindbergh

What? You expected perfection?

Would you listen to American Legends: The Life of Charles Lindbergh again? Why?

Sure, it's relatively short-- not a huge commitment, and it is a decent story.

What was one of the most memorable moments of American Legends: The Life of Charles Lindbergh?

During the first trans-Atlantic flight, his attempt to speak (yell) to fishermen in their boats and ask 'which way is Ireland?'

Des Moines, IA (1941). Publicly reasserting the wisdom of isolationism. I believe he was a thoughtful patriot. He could not be stampeded into it.