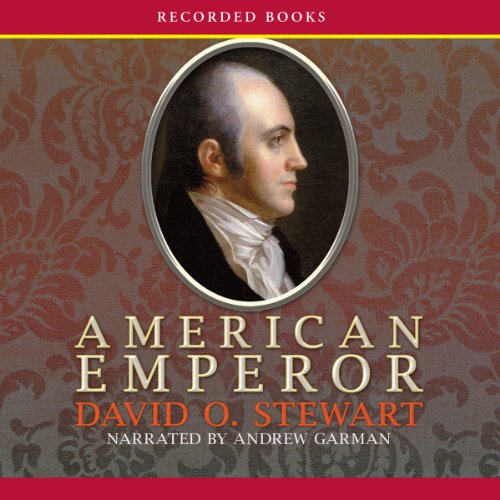 By: David O. Stewart
Narrated by: Andrew Garman
Try for $0.00

A spellbinding storyteller, historian David O. Stewart traces the canny and charismatic Aaron Burr from the threshold of the presidency in 1800 to his duel with Alexander Hamilton. Stewart recounts Burr’s efforts to carve out an empire, taking listeners across the American West as the renegade vice president schemes with foreign ambassadors, the U.S. general-in-chief, and future presidents.

“A lively but judicious portrait of grand … ambition.” (Evan Thomas)

What listeners say about American Emperor

Very good book, well read and intriguing story. I read Chernow's Hamilton and wanted to get more on the other side of the story. I couldn't imagine how Burr could be interesting and was worried about what a book on him could be like. What I found was a completely different dimension to the history surrounding Jefferson, Hamilton and early American history. Stewart does an excellent job of tying in surrounding events, the mood of the people, western expansion and how we can't really judge the events through the eyes of the 21st century. I will say that similar to Chernow, Jefferson does not come out looking like an ethical, upstanding president, but it shows how he was willing to break the constitutional law to further his political power. Burr ended up sad and pathetic as history moved past him, but except for Wilkerson's betrayal, might have reshaped the map of North America.

Would you listen to American Emperor again? Why?

Maybe. It was very engaging, although it would take a lot for me to listen to any book more than once --- there are too many other books out there to listen to.

Burr is clearly the most riveting character, although "favorite" is probably not the best term for him under all the circumstances disclosed.

Which character – as performed by Andrew Garman – was your favorite?

The descriptions of Burr's trials including the background on other key players such as John Marshall were very enlightening. The background on what led to the duel with Hamilton and why Hamilton approached it the way he did was also very interesting.

Terrific book, wild story, should be a major motion picture! Everyone knows that Burr shot Hamilton, but the details about the 1800 election, the treason and related trials, the time in Europe, all of this was very compelling and not the stuff I recall getting in school.

He Tried to Shatter America for Personal Gain

Surprisingly contemporary in his blind, selfish political pursuits, Aaron Burr sought to strip America of its western territory and set up his own country or something similar. Who knew!?! You sure don't learn this in high school. Historically accurate and full of detail and dates for the interested lay person like me. I'd read about this plot in other books but David Stewart has fleshed out the rich details. Secondary characters are well described and the puzzle pieces neatly put together in a fascinating story. The narrator does a great job keeping the action moving. Makes the book pleasant to hear.

The problem with Aaron Burr is that he left nothing behind. As the author notes, Burr refused to conduct business in writing. So we are left with other people's accounts of Burr's life, all of which are tainted by the reporter's perspective. Stewart does a good job of giving space to all the varied views of Burr but as a consequence I came away more than a bit confused. With that said, this book is very much worth the time, especially in the passages which describe Burr's various trials. The insight given into how the legal system operated at the time, and the degree to which it was driven by personal animosity, is great.

I could not finish this book. I read from across the political and historical spectrum, and finish books that I disagree with frequently. I feel that I am giving the author a fair chance to convince. However, this book makes too many points to support the theme of Colonel Burr being evil, while discarding or omitting facts that may dispute that theme.

American Emperor or not?

Great description of the struggles of Aaron Burr life but of the early years of democracy. Especially recommend to those who believe our government has run rather smoothly till now.

Enjoyed it, but would have liked more detail about the denouement of his life. His post-trial to death period was kind of glossed over. Enjoyed the bulk of it, though. Burr was an intrepid character and, quite possibly, innocent of true treason.