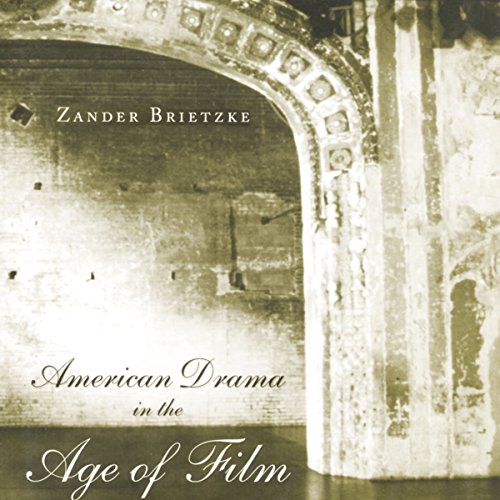 American Drama in the Age of Film

American Drama in the Age of Film

By: Zander Brietzke
Narrated by: Brian E. Smith
Free with a 30-day trial

Is theater really dead? Does the theater, as its champions insist, really provide a more intimate experience than film? If so, how have changes in cinematic techniques and technologies altered the relationship between stage and film? What are the inherent limitations of representing three-dimensional spaces in a two-dimensional one, and vice versa?

American Drama in the Age of Film examines the strengths and weaknesses of both the dramatic and cinematic arts to confront the standard arguments in the film-versus-theater debate. Using widely known adaptations of ten major plays, Brietzke seeks to highlight the inherent powers of each medium and draw conclusions not just about how they differ, but how they ought to differ as well. He contrasts both stage and film productions of, among other works, David Mamet's Glengarry Glen Ross, Sam Shepard's True West, Edward Albee's Who's Afraid of Virginia Woolf?, Margaret Edson's Wit, Tony Kushner's Angels in America, Tennessee Williams' Cat on a Hot Tin Roof, Arthur Miller's Death of a Salesman, and August Wilson's The Piano Lesson. In reading the dual productions of these works, Brietzke finds that cinema has indeed stolen much of theater's former thunder, by making drama more intimate, and visceral than most live events.

But theater is still vital and matters greatly, Brietzke argues, though for reasons that run counter to many of the virtues traditionally attributed to it as an art form, such as intimacy and spontaneity. Brietzke seeks to revitalize perceptions of theater by challenging those common pieties and offering a new critical paradigm, one that champions spectacle and simultaneity as the most, not least, important elements of drama.

"Brietzke's discussion of the theory is fresh and provocative. A great deal of the book's contribution is its original, thoroughly knowledgeable readings of plays and adaptations." (Brenda Murphy, author of The Provincetown Players and the Culture of Modernity)
"In this elegant and long-overdue book, Zander Brietzke delivers a passionate defense of the theater, a reminder that even, and especially in an age of media, theater remains the most live and lively art." (Martin Puchner, author of Stage Fright: Modernism Anti-Theatricality, and Drama)

What listeners say about American Drama in the Age of Film