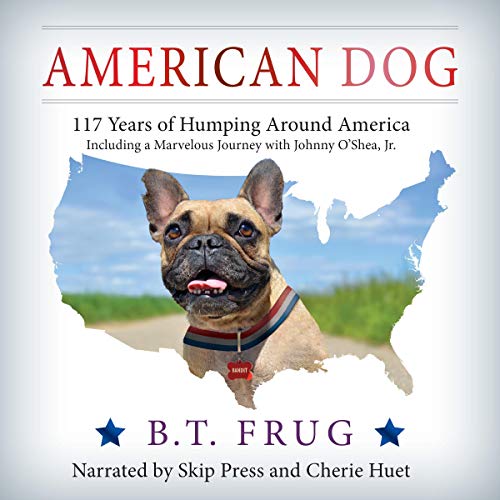 By: B.T. Frug
Narrated by: Skip Press,Cherie Huet
Free with a 30-day trial

American Dog: 117 Years of Humping Around America Including a Marvelous Journey with Johnny O’Shea, Jr. by B.T. Frug

"This is an American book by an American dog.” Thus begins what is without a doubt the first book ever written by a Frenchie pug, or probably any dog, and quite possibly by any nonhuman in the history of nonhumankind.

Born sometime in the early 1900s somewhere in New York City, Bandit the Frug does not remember his parents or any siblings, but he does recall muddy roads, cars, and horses navigating the streets at breakneck speed without turn signals, playing with his puppyhood pal - a Beagle named Digger, and the moment of realization that he, Bandit T. Frug, was...different.

It was in 1915 that Bandit recognized he was no longer advancing in years, even though he probably stopped aging in 1903 or 1904. This wrinkle in the fabric of existence has kept him in his prime - 21-28 in dog years - indefinitely. Wandering the country ever since, Bandit has had a bevy of fascinating and sometimes nerve-rattling adventures.

He’s been in his fair share of animal shelters, and rarely the “no kill” type. Fortunately, for the sake of his perpetual existence, there’s always been someone struck by the pure canine cuteness of a 22-pound, 14-inch high Frug in need of a loving home. Bandit’s had as many names as he’s had owners.

By 2016, Bandit thought he’d seen every type of owner, and then he meets Johnny O’Shea, Jr., a 44-year-old, bipolar alcoholic living in Bloom, Missouri - his entire life spent in-state for fear of what terrors lay beyond the borders of the “Show Me State”.

Needless to say, Johnny is confounded to meet a literate dog, but he is even more terrified at the prospect of journeying out of Bloom, out of state, and throughout the Great 48, once the clever Bandit convinces him to distribute the little book on happiness Johnny has written purely from an academic point of view.

What listeners say about American Dog